4th DubaiDebate on “Women, Civil Society and Leadership in a New Arab World”

„We as women now have the opportunity to do away with antiquated structures in Arab countries and to redefine our role in society.” This crisp statement by Syrian Blogger Sumaya Tayara kicked off the 4th edition of the DubaiDebates on Sunday, Dec. 18th, 2011. Sumaya Tayara was joined on the panel by Tunisian activist Amira Yahyaoui, renowned Emirati Professor of Political Science Dr. Ebtisam Al Kitbi, as well as the „Arab Feminist” Mohamed Abu Obaid. The four engaged in a passionate debate about the current and future role of women in the ongoing transformation process in the Arab world.
December 20, 2011 Ordering Information 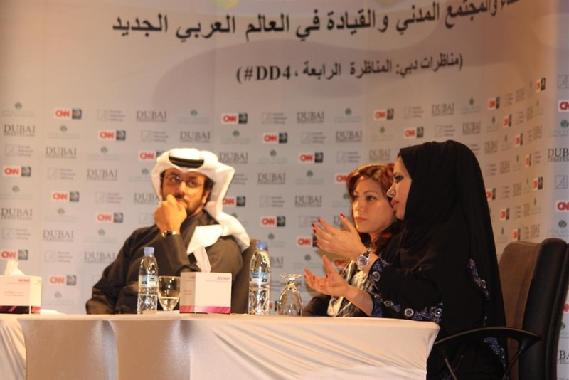 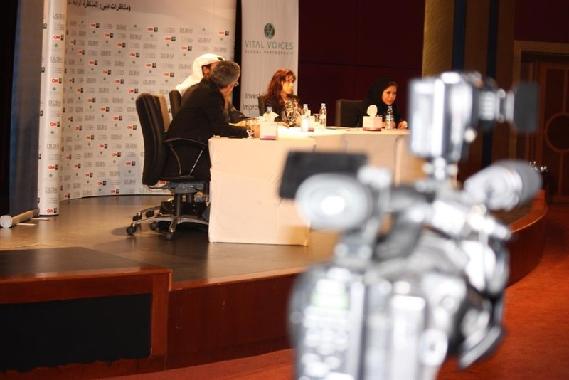 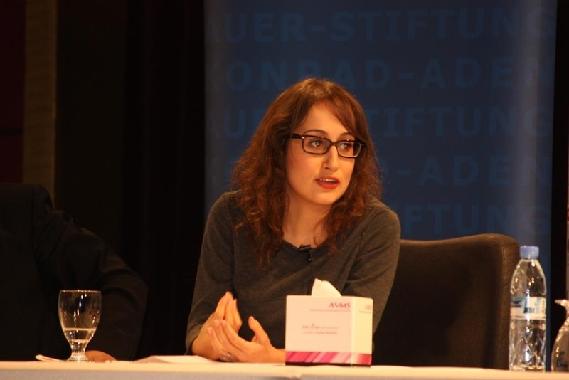 KAS
Amira Yahyaoui: "The mentality of women needs to change. In Tunisia they had to literally be convinced to run for office.” 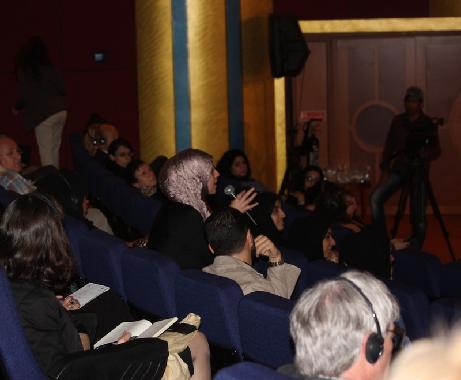 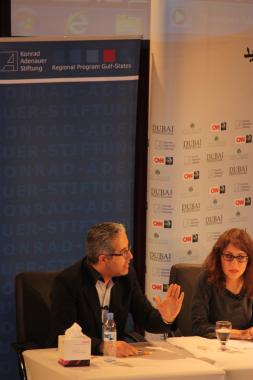 KAS
Mohamed Abu Obeid: "Western models of gender equality have to be adapted to the respective regional and local environments." 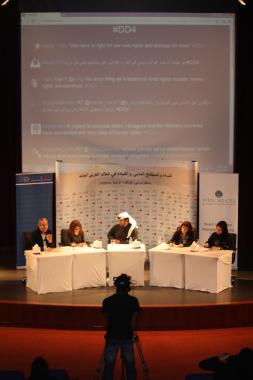 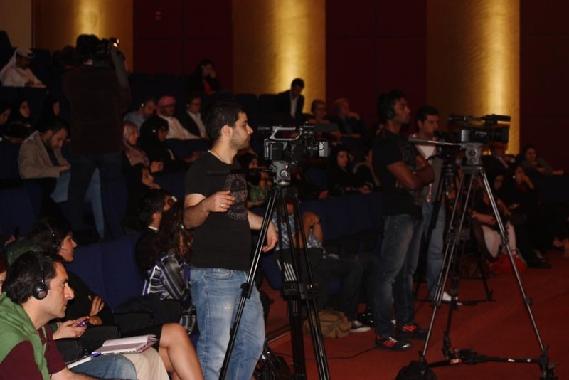 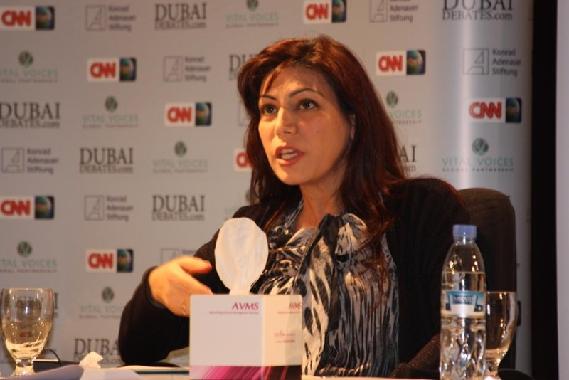 KAS
Sumaya Tayara: "Women’s rights have been defined in writing in the Human Rights Charta and are not limited to the Western world. But they have to be applied in Arab societies and women have to fight for their rights." 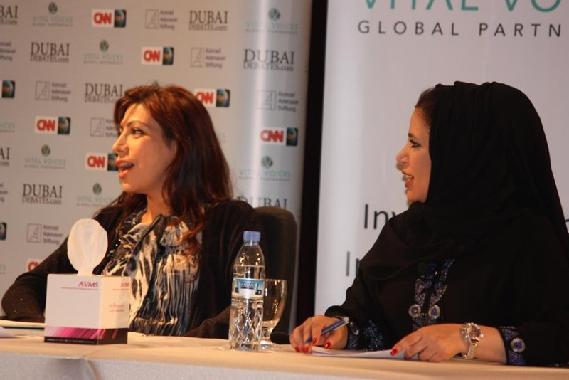 KAS
Dr. Ebtisam Al Kitbi (right) cautioned once more about the danger emanating from Islamic groups. She was without a doubt that these groups will draft regulations that will hinder women to actively participate in social and political matters.

A large audience witnessed Mishaal Al Gergawi moderating a debate, which did not in the least reflect the traditional picture so often associated with women in the Arab culture.

Women took part in the demonstrations, were active in opposition groups and shed light on the oppression, censorship and corruption in their countries via social media networks. But looking at the balance sheet of the Arab Spring women are often disappointed: while many of them risked their lives in the protests they hardly benefit today from the newly acquired freedom. Has the role of women in the Arab Spring been exaggerated? This inaugural question opened up the debate and the organizers took a poll amongst the panelists and audience - a novum for the DubaiDebates. The audience’s vote was clear: the Arab Spring sent a strong message that women no longer stand at the margins of society; but the transformation process still has ways to go. Women have to continue fighting for their rights and fend off Islamist groups that want to turn back time.

Women’s hopes are high after the Arab Spring. They want to actively participate in their new society. However, women are still underrepresented in Arab political institutions. No Arab country is being ruled by a woman and the number of female ministers is hardly worth mentioning. Given the small number of female politicians the question arises if this issue can be solved by introducing a quota system. Amira Yahyaoui ran for office in this year’s elections in Tunisia. She headed the list of independent candidates of „Sawt Mostakel“, but was unable to secure a seat in parliament. Ms. Yahyaoui stated that women often lack the self-confidence to step up. “The mentality of women needs to change. In Tunisia they had to literally be convinced to run for office.” In her opinion a quota system would not be very helpful. It poses the danger, that women would be used solemnly to “fill the gaps.” All panelists agreed that it is society that needs to change primarily. Dr. Al Kitbi pointed out that women with ambitions in the free economy face similar social and traditional barriers. Therefore, only a low percentage of economic management positions are held by female staff. She explained that even though the Gulf States pose a positive exception among the Arab countries, career woman still fight for full acceptance in Gulf societies as well.

Women like the Yemeni Nobel Peace Prize laureate Tawakkol Karman, or “the voice of the Jasmine-revolution“, Lina ben Mhenni, a web activist in Tunisia, raise the hope that the revolutions will also lead to a significant social development for women. With this in mind the panelists debated if the western example of gender equality can serve as a model in traditional Arab societies.

According to Mohamed Abu Obeid discrepancies between genders exist also in western societies and social structures cannot be copied one-to-one but have to be adapted to the respective regional and local environments. Equality of men and women is guaranteed as a human right and universally valid, countered Amira Yahyaoui. She stressed, that gender equality cannot be considered a western model but a universal principal. Women’s rights have been defined in writing in the Human Rights Charta and are not limited to the Western world. But they have to be applied in Arab societies. Sumaya Tayara agreed and added that women themselves have to fight for their rights.

Dr. Al Kitbi cautioned once more about the danger emanating from Islamic groups. She was without a doubt that these groups will draft regulations that will hinder women to actively participate in social and political matters. According to Salafitic teachings women are not to leave their house and are to be protected by men, she explained. Religion still plays a significant role in the relationship between men and women. However, Dr. Al Kitbi was hopeful, that society would follow suit if the government passes new laws in favor of women’s rights.

The issue of western examples also sparked a heated debate on twitter, where DubaiDebate organizers and audience alike tweeted life-feeds. The consensus among twitter users was clearly that gender equality was a universal human right that cannot be limited neither to specific regions nor cultures.

Do women’s rights have to be constitutionally guaranteed? The panel agreed on this final question of the debate; yes, equality can only be insured if it is explicitly stated in the countries’ national constitutions. The core of the problem is in the men’s heads, stated Amira Yahyaoui. She demanded practical equality of men and women which calls for new laws and a change in mentality. Mohamed Abu Obeid added that Arab societies hold on to their traditions too strongly and miss out on new developments and modern times. Dr. Ebtisam Al Kitbi highlighted the immense importance of education and upbringing in this change process: “We have to change our educational system and our stereotypes in regards to traditional gender roles.”

Dubai Debates is an independent debating forum aimed at the Arab youth. Harnessing the possibilities of new media, Dubai Debates aims to give everyone a voice in periodical debates that discuss some of the Arab world’s most pressing issues with opinion leaders, politicians, journalist and political activists.

By broadening participation through channels like Facebook, Twitter and Youtube, DubaiDebates create an ongoing, inclusive, and open discourse enabling all voices to be heard. With web technology now available to a rapidly increasing number of people across the Arab region and the world, and at a time where there is a great demand for constructive discourse, DubaiDebates aims to provide a platform that allows everyone to engage in debates.

Dubai Debates on "Females in the Arab Spring"

To the event
Dubai Debates
More about this topic