A STRATEGIC DIALOGUE ON FUTURE SECURITY CHALLENGES IN THE MIDDLE EAST

Konrad-Adenauer-Stiftung and the EastWest Institute arranged a two-day strategic dialogue, bringing together experts from ten countries to discuss political and economic scenarios for post-ISIS Syria and Iraq.
November 16, 2016 Ordering Information

KAS_RPG
The participants and organisers of the conference "Post-ISIS Iraq and Syria: Stability through Regional Cooperation" at Lake Como, Cadenabbia.

The military campaigns against the self-proclaimed “Islamic State” (ISIS) are making some progress. The ongoing offensive against ISIS in Mosul is representative of a general trend: The jihadist group is losing ground, 40 per cent of its territory in Iraq alone, and could soon be further weakened in combat. No doubt, the recent progress is good news. It does not answer the question, however, which civil-political strategy will complement the military campaign in the long run and might replace it in case of a victory over ISIS on the battlefield. Against this background, Konrad-Adenauer-Stiftung’s (KAS) Regional Office Gulf States as well as its Syria/Iraq Office organised an interregional expert discussion in cooperation with the EastWest Institute (EWI) for an in-depth discussion on strategic Track 2 and Track 3 measures for Syria and Iraq.

Overall, two general insights shaped the debate during both days. First, a sustainable, successful strategy will need to address the structural root-causes that created a conducive context for the rapid rise of ISIS. Second, a long-term solution has to include all regional and international actors, including Iran, Saudi Arabia, and Turkey. The alliance against ISIS is already fragile; fostering cooperation will thus prove even more challenging without a common enemy in the future.

In view of these challenges, the main objective of the strategic expert congress in Cadenabbia, Italy, was to strengthen the international and intraregional dialogue. Hence, KAS and EWI brought together experts from Syria, Iraq, Turkey, Saudi Arabia, Iran, Europe, Russia, and the United States. The researchers and practitioners debated, amongst other topics, different state-forms and scenarios for both Iraq and Syria, including federal and confederal models, as well as the future and degree of autonomy of Kurdish regions and their prospective relations to their central governments. In addition, the experts examined the danger of increasing regional terrorism as a result of a shift in strategy in response to ISIS’ latest conventional setbacks.

Including regional middle powers remained a central theme throughout the conference, especially with regard to recent tensions between Iran and Saudi Arabia, which create considerable externalities for conflict resolution in both Iraq and Syria. The participants also discussed the impact of the latest US presidential elections on American-Russian bilateral relations and its implications for a long-term settlement of the conflict in Syria.

With this expert conference, Konrad-Adenauer-Stiftung, in cooperation with the EastWest Institute, aims to expand the current debate to include a long-term, civil-military framework of resolution. Furthermore, the event’s purpose was to create a multidimensional platform for dialogue to strengthen international and intraregional cooperation efforts. 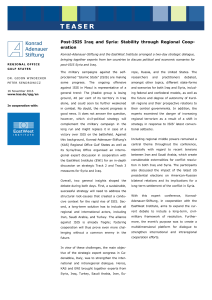 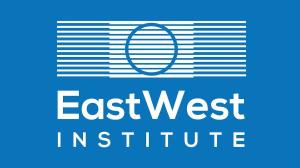