Young Women in the Gulf Region in Need of Career Opportunities

by Rahma Janetzke
About 70% of students in the Gulf region are female. Only a small fraction, however, makes the successful transition from the classroom to the executive floor. The situation in Germany is similar, as most of the leading positions within corporations are occupied by men. Yet, what is the reason for this discrepancy and how can women overcome the almost insurmountable obstacles?
October 14, 2013 Ordering Information 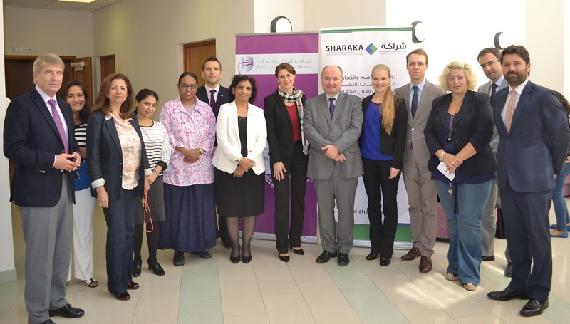 RPG Golf-Staaten
Ambassador Adam Kułach (Centre), Head of the EU Delegation to Saudi-Arabia and the Gulf Region, Dr Eva Fischer, Spokesperson of the Executive Board of the Educational House of the German Chamber of Industry and Commerce Swabia (to the left of Ambassador Kułach), and Ms Rahma Janetzke (to the right of Ambassador Kułach), SHARAKA Project Manager, during the lecture at the Royal University for Women in Manama, Bahrain 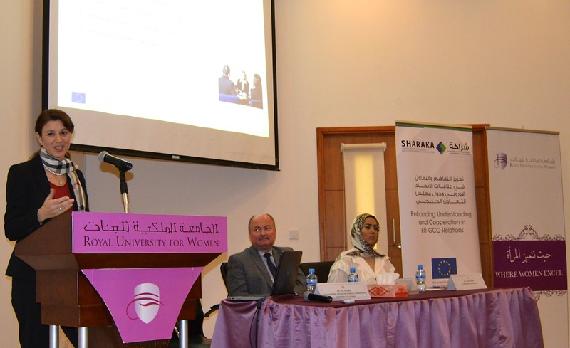 RPG Golf-Staaten
Dr Fischer during her lecture in Manama, Bahrain 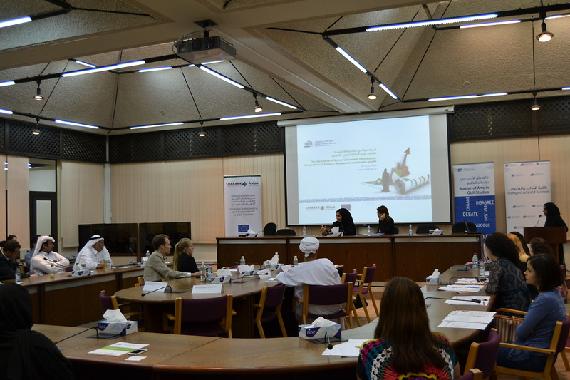 Within the framework of the EU-funded SHARAKA project, Dr Eva Fischer, Spokesperson of the Executive Board of the Educational House of the German Chamber of Industry and Commerce Swabia, addressed these questions in Qatar, Bahrain, and Kuwait last autumn. Dr Fischer’s presentation, which focused on the situation of women in Germany and Europe, was followed by a debate with local business women and the mainly, though not exclusively, female audience on differences and similarities between the Gulf countries and Germany.

With regards to Germany, Dr Fischer emphasised the societal transformation which has occurred over the last four decades. A part of reality is the fact that women currently compose 46% of the German workforce, but beyond this positive development Dr Fischer also discussed the still-existing shortcomings. These became apparent after taking a look at the percentage of women in leading positions in DAX (German Stock Index) companies (6%). Moreover, none of the DAX companies is led by a female CEO. A male participant expressed amazement regarding the low numbers during the Q&A session: “since a woman, Angela Merkel, holds a leading political position in Germany, such a huge discrepancy in the economic sector is particularly surprising”.

Nevertheless, moving up the career ladder is not the sole hurdle women need to overcome: young female graduates are confronted with the obstacle of entering the career field – just like their male counterparts. Subsequently, differences in payment between male and female workers still exist. Dr Fischer also stressed the fact that women are usually not as good on “self-marketing” as their male colleagues and their skills are hence often underestimated by their superiors. She furthermore focused on the conflict between career management and family planning. It became clear that in the Gulf region as well as in Germany the compatibility of having a family and pursuing a career is one of the largest obstacles for young women to overcome in their life. Hence, further debates need to address this specific problem.

During the events at the College of Arts and Sciences at Qatar University, the Royal University for Women in Bahrain, and the Gulf University for Science and Technology in Kuwait, the dialogue between Dr Fischer and the business women was of particular importance. On the one hand, female students could benefit from these women, each of them successful within their own field, as role models while identifying themselves especially with the business women of their own country. On the other hand, it was motivating to see the appreciation of the business women for one another. The lecture series demonstrated to be an informative experience for all sides involved, which is in accordance with the goal of SHARAKA to enhance understanding and cooperation in EU-GCC relations.

Alongside high-ranking officials such as the Head of the EU Delegation to Saudi-Arabia and the Gulf Region, Adam Kułach, representatives of various European and Arab embassies, think tanks, and university professors attended the lecture series. Due to positive feedback from participants and partners, the topic of the importance of women’s economic participation should obtain high priority on the KAS Regional Programme Gulf States agenda. 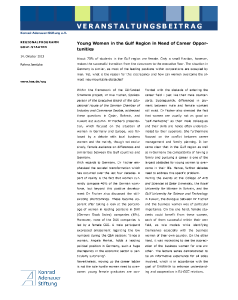