ECONOMIC PERSPECTIVES ON THE ARAB SPRING

The political impact of the “Arab Spring”, which began a little over a year ago in Tunisia, has been at the centre of academic and political reviews. KAS Regional Programme Gulf States took the analysis to another level and invited Raed H. Charafedinne, Vice Governor of the Lebanese Central Bank, to Abu Dhabi to speak about the economic aspects of the Arab transformation process. The Policy Breakfast "The Economic and Financial Prospects of the Arab Awakening - A Year On" had been jointly organised with the INSEAD Business School Abu Dhabi.
March 5, 2012 Ordering Information 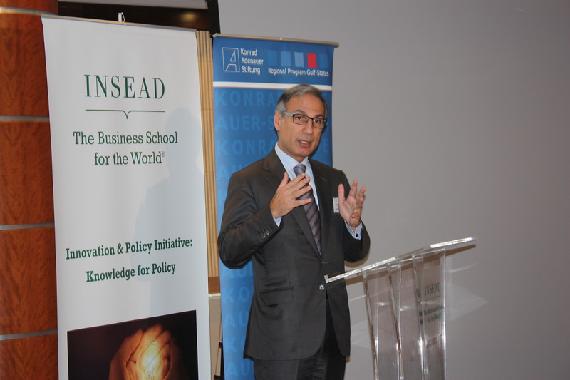 Regionalprogramm Golf-Staaten
Raed H. Charafedinne, Vice Governor of the Lebanese Central Bank, spoke about the economic aspects of the Arab transformation process at a policy breakfast in Abu Dhabi. 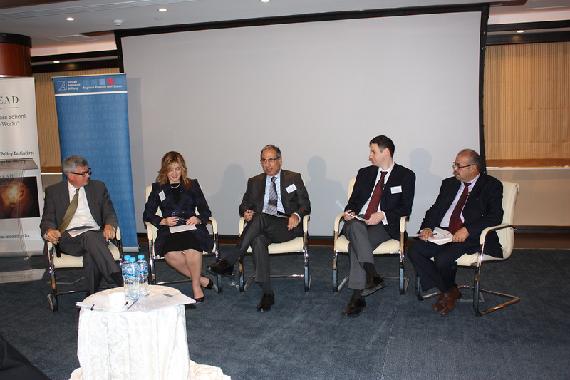 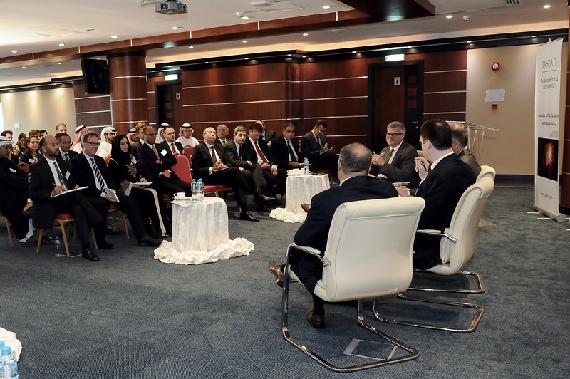 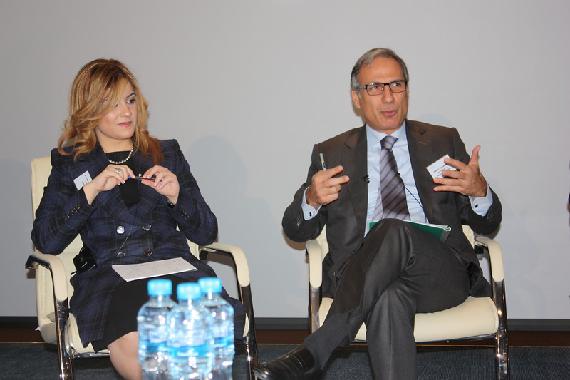 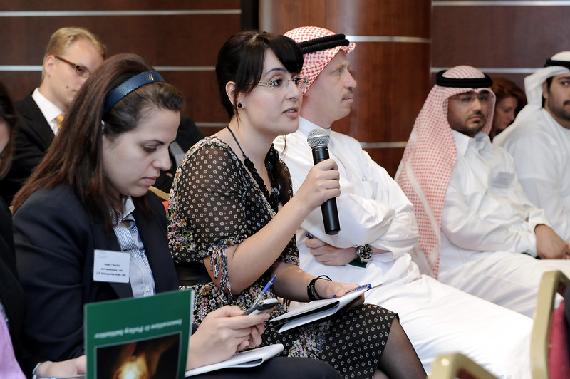 Regionalprogramm Golf-Staaten
Audience members contributed to the lively discussion with questions and comments.

In his speech Charafedinne pointed out the enormous economic costs of the Arab Spring. Due to political uncertainty the numbers of investments and tourists decreased and the costs to borrow money on the international financial market increased considerably for the affected countries. At the same time the national economies of the Arab states face structural problems in general. However, the situation differs from country to country.

While the oil-rich Gulf States have a very high GDP, their heavy dependence on revenues of oil exports pose a serious problem. Without a diversification of their economies, a strengthening of their private sector and the reduction of subsidies they will not be able to keep up their current level of wealth.

The MENA-states on the other hand struggle with a low GDP and challenges in the labour market and education. Hence, Charafeddine urges for reforms of the labour market and the educational sector in these countries. In Tunisia for example every year 40.000 adolescents under the age of 25 years graduate und try to find a job. However, on average only 9.000 new jobs are created annually. The unemployment among young people under 25 years amounts to 65%. Therefore, the reform of the employment sector poses one of the biggest challenges for the newly elected governments. In accordance with a report of the World Bank Group, 40 billion new jobs have to be created in the entire region by the year 2020.

As an answer to the extensive economic problems, Charafeddine called for the strengthening of regional Arab institutions, such as the Arab League or the Arab Monetary Fund. He pointed out that an assertive and joint representation of Arab interests has been missing. It is needed to coordinate regional interests and to implement them internationally. Charafeddine suggested an integrative approach that will include political, economic and social measures.

Reducing trade barriers between the Arabic countries and thus creating an integrated regional market is of particular importance, according to the Vice Governor. In turn, this regional market needs to be tightly knit into the global economy whereby Asia shows best potential as a major trading partner.

Careful attention was paid to the suggested reforms of the labour market and the educational sector. Dr. Eid Al Zyoud said that they were necessary for a lasting success of the ongoing democratization efforts. In this context, Dr. Abdulaziz Istaitieh noted, that the strengthening of the educational sector has to be top priority.

Dr. Mona Hammami alluded to the difficulties that prevailing political uncertainties pose to the successful implementation of long-term measures. However, short-term measures as a solution for financial problems are also not an option as the markets demand political stability. Therefore, Dr. Hammami called on non-government parties to play a pivotal role in solving the problems.

Both, the lecture of Charafeddine and the discussion panel, echoed a positive response. Almost 60 Emirati and international guests attended the event and contributed with questions and comments to the lively discussion.