The KAS Rule of Law Programme Asia held its 6th Alumni Lawyers’ Workshop on 25 and 26 June 2016 at Mandarin Oriental Hotel, Singapore. The theme for this year’s workshop was ‘Legal Approaches to the Refugee Crisis in Asia’, and it was indeed timely for us to discuss this subject in light of the 2015 European migrant crisis as well as the Rohingya refugee crisis of Southeast Asia. These events also brought the issues of human trafficking, irregular migration and the persecution of certain ethnic and religious minority groups to the fore and were topics that were actively discussed.
July 1, 2016 Ordering Information

This year, our alumni lawyers were also joined by members of the KAS Environmental Lawyers’ Group, to participate primarily in a session on climate refugees, which is a growing non-traditional security challenge both regionally and internationally. We were also privileged to have with us Professor Jürgen Bröhmer, Dean of the School of Law at Murdoch University Australia, who gave a Keynote Address at the start of the workshop. This added to the diversity of views and perspectives on the subject of refugees and irregular migration, as Australia was also a country that featured prominently in this crisis when it enacted controversial policies in an attempt to address the matter. In his address, Professor Bröhmer considered the refugee crisis in the context of ‘Brexit’ – a historic referendum that saw the United Kingdom leaving the European Union – as well as the international and regional legal frameworks on refugees and migrants in general.

Over the 2-day Workshop, the panellists and participants considered topics such as the challenges of ensuring adequate refugee protection in Asia and the Pacific, national approaches to the refugee crisis and some key regional developments, as well as the role of the rule of law and human rights in the context of refugee law and irregular migration. It was highlighted that the current legal framework for the status and protection of refugees, such as the 1951 Refugee Convention and 1967 Protocol to the Convention, is often criticised for its failure to include climate refugees and war-time refugees in its definition of a refugee. It was also alluded to in Professor Bröhmer’s Keynote Address, as well as the participants’ presentations, that the refugees’ crisis is the result of other fundamental problems that arise because of government, and governance deficits. This is still a national matter and countries are understandably wary of intervening in the internal affairs of another state – yet, this means that the problem continues to be ignored. It was therefore suggested that the challenge of the next decade, in the international and regional arenas, is whether a form of transnational governance and institutional frameworks can be established to address these transnational problems.

Following the panel sessions, our participants engaged in interactive wrap-up discussions which focused on the fact that the current international conventions and treaties governing refugees still lack strong protective mechanisms that will allow for the effective enforcement of their rights – this is especially the case at the regional framework when our participants considered the example of ASEAN. Our participants also considered whether there could be a way of importing the concepts and principles under public international law, such as that of state responsibility, into refugee law and a parallel was drawn with how environmental law frameworks have incorporated such concepts so as to hold countries accountable for breaches of environmental law obligations. The importance of international and regional cooperation and collaboration was also repeatedly stressed by our participants in this regard, given the trans-boundary nature of the refugee crisis and the fact that the recipient countries often lack the resources or capacity to effectively manage the large influx of refugees and irregular migrants into the country. Our participants also advocated for a greater ‘human rights consciousness’ when coming up with policy and legal frameworks, so as to ensure that the fundamental freedoms and rights of these refugees are adequately safeguarded.

The workshop concluded on 26 June with a dinner at Cherry Garden Restaurant together with Dr. Gerhard Wahlers, Deputy Secretary-General of KAS, and Professor Dr. h.c. Rudolf Mellinghoff, President of the German Supreme Court of Finance and former Judge of the Federal Constitutional Court, who engaged our participants in a discussion on the implications of the refugee crisis for Europe in the aftermath of Britain’s exit from the European Union (“EU”), as well as its impact of free movement and immigration within the EU. This dinner was also attended by our guests who had been invited to join us for our Programme’s Anniversary Symposium on 27 June 2016, as well as participants who joined us thereafter for our Programme’s inaugural research group session on ‘Constitutionalism in Asia’. These included constitutional law experts as well as former and current judges from the region, such as Chancellor Adolfo Azcuna from the Philippines, Grand Justice Chen Shin-Min from Taiwan, Judge Punya Udchahon from Thailand, together with former UN Special Rapporteur on the Independence of Judges, Dato Paramsothi Cumaraswamy, from Malaysia.

Overall, the workshop was a successful one as it provided the opportunity for our participants, drawing from their diverse professional backgrounds and levels of expertise, to reconnect with one another, establish new networks, and engage in dialogue and exchange of information. This emphasises the fact that the problem of refugees and irregular migration is an issue that ultimately warrants a global response and global thinking. 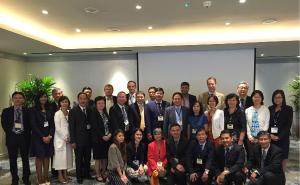