The Practice of Constitutionalism in Asia – Emerging Trends and Contemporary Challenges

2nd Workshop of the Research Group on “Constitutionalism in Asia”

On the 26th and 27th of February 2017, the second meeting of the Asian Research Group on Constitutional Law took place in Siem Reap, Cambodia. In contrast to the previous year, this time the focus was on current developments and challenges for constitutional practice. With 12 experts from ASEAN countries, as well as from Nepal, Australia and Germany, the role played by law and policy, institutional structures and the rule of law was examined in the light of the linkage between state governance and constitutional development.
March 3, 2017 Ordering Information 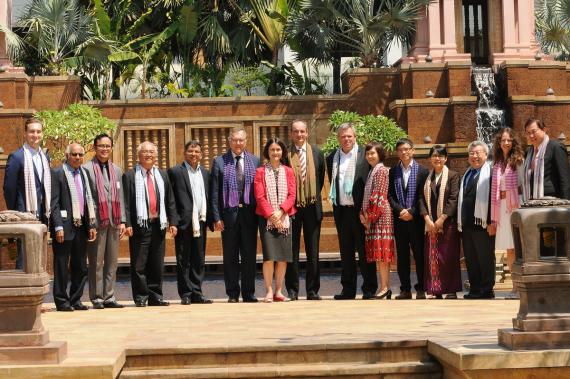 Participants of the 2nd KAS Research Group on Constitutionalism in Asia 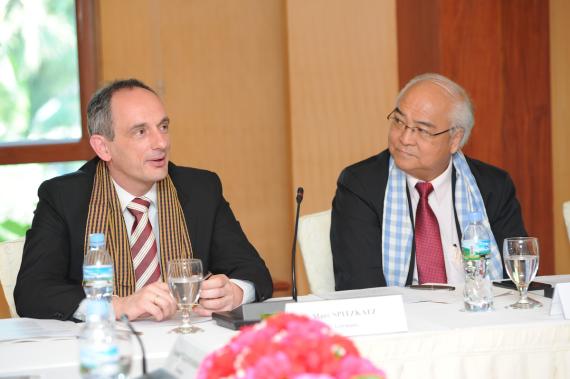 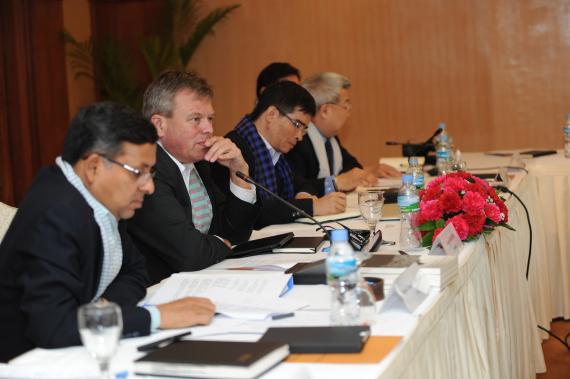 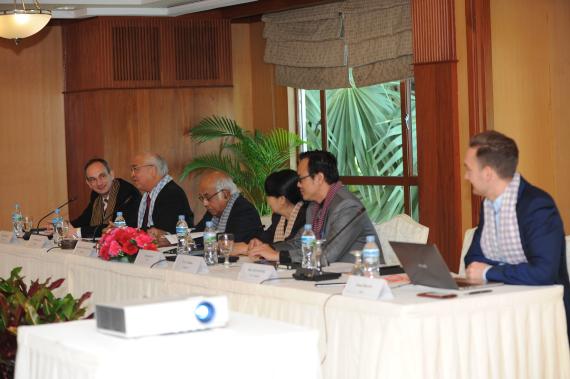 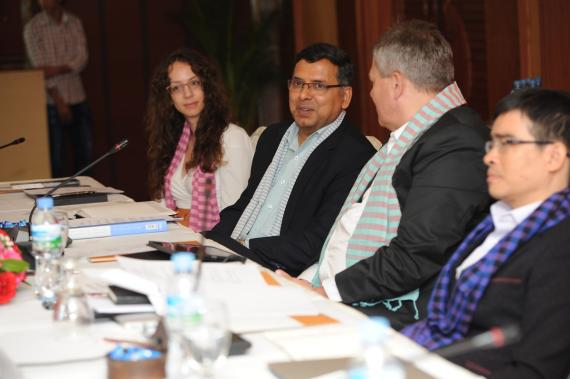 Participants of the 2nd KAS Research Group in discussion 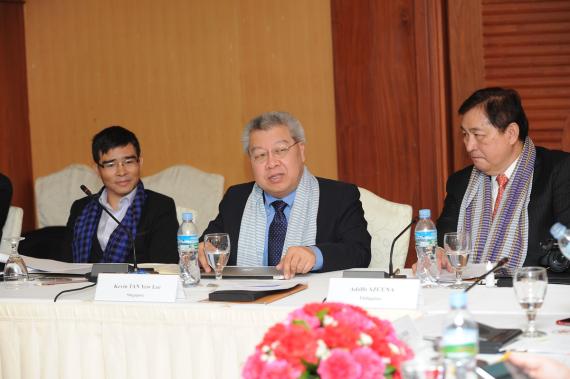 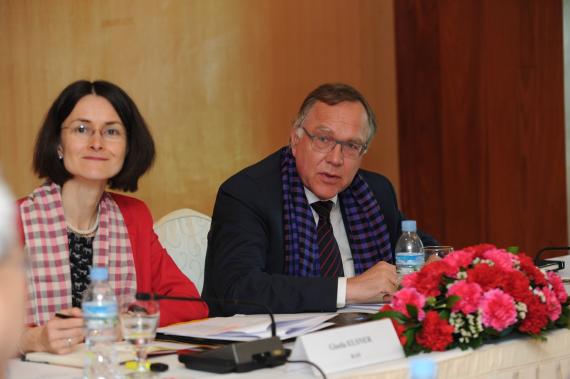 The promotion and development of new Asian perspectives with regard to these topics took centre stage here, with the emphasis on a practical approach as a supplement to existing academic research and literature.

After the newly launched research group laid the foundations for a dialogue in the context of constitutional development through comprehensive discussions in 2016, it was now time to build on that and address current issues of constitutionalism in the region. In view of the current geopolitical climate and the related threats to the understanding and practice of constitutional theory on a global level, it made sense to take an interdisciplinary look at identifying obstacles other than legal ones in order to seek out solutions and promote positive development.

The subject focal points included, on the one hand, the regime changes that have occurred and are impending worldwide and the growing influence of populism on the politics and constitutions of the region, and on the other hand, the need for integrating constitutions in the midst of increasing social, political and religious diversity in Southeast Asia in particular. In addition, the role of non-institutional actors such as political parties and civil society organisations or movements, which play an essential role in the creation and development of constitutions, should also be examined.

The workshop was divided into four sessions by theme. The first session, entitled “Challenges & Chances: Asia Between Popular Constitutionalism and Legal Constitutionalism”, was based on the theories prevalent in academic circles in the USA, and discussed the role and influence that should be taken by the people in constitutional decision-making, and the challenges and opportunities connected with this role.

There was discussion of the constitutional mobilisation of the people by civil actors in an authoritarian system, which was to be evaluated positively. The example used was Vietnam which, despite its political structures, is increasingly permitting the people to participate constitutionally through petitions and proposals in a national dialogue. At the same time, however, the experts pointed to possible problems posed by citizen participation, such as the fact that the very young Philippine population did not live through the Marcos dictatorship or does not remember its horrors. This fact, combined with poor education and awareness, means that there is a great susceptibility to populist tendencies that challenge the pioneering constitution of 1987, which was created in direct reaction to that regime. A return to states of emergency and the application of martial law, which the 1987 constitution clearly restricts as a result of abuse by Marcos, thus suddenly seems to lie once more in the realm of the possible.

Also discussed was a perennial challenge for the ASEAN region in particular, its considerable religious, ethnic and cultural diversity, and how a fair representation could be achieved for all those involved. Should minority rights be governed in the constitution? Does privileged status for ethnic groups lead to heightened expectations and result in less willingness to compromise? Could it be enough, just to regulate the equality of all citizens in the constitution? A single universal answer for the region cannot be found, so each individual country will still need to address this delicate issue critically.

In contrast to the foregoing, the second session, with the subject of “Courts as Guardians of the Constitution: The Fine Line between Primacy of Law & Judicialisation of Politics” involved not the role of citizens, but rather of the courts as protectors of the constitution between the rule of law and politics.

In lectures describing the role of the supreme courts in Malaysia and in Germany, the experts clarified the fundamental importance of these courts as pillars of our constitutional order. Thus, it was noted that the degree of civilisation of a nation can often be measured by the freedoms of its citizens, but that such freedoms are meaningless without an independent, vigilant judiciary which defends these freedoms, and an executive arm which respects the latter’s rulings. Also underlined was the role of the courts as a barrier between the force of the state and the population, and the need for monitoring mechanisms that allow all citizens to examine executive actions for violations of the constitution.

In the view of the experts, it is not possible here to avoid politicisation of the rulings of constitutional courts and supreme courts, precisely when the issue is the annulment of executive orders. However, this should not be interpreted as a violation of the separation of powers or usurpation of the government, but rather, this falls precisely within the truest responsibility of the courts. By its very nature, politics influences jurisprudence, which in turn exerts an influence on politics, so that a strict division of powers is often not possible in constitutional law, as both elements are inextricably intertwined with each other.

The subject of the closing session of the first day was deliberately broad in its definition, with the title “Inclusive Constitutionalism – Evolution through Contestation” and it was the task of the participants to present their interpretation of an inclusive constitution and to illustrate whether a constant external challenging of the constitution would promote this.

A very instructive contribution to this topic came from Nepal, which may have been faced with one of the greatest challenges with its new constitution, with regard to inclusiveness. A total of 103 ethnic groups are represented there, and all have been assured of equality, proportional co-determination, inclusion and social justice in the constitution of 2015. While this is in theory an exemplary approach, in practice the issue arises of how such a proportional approach, which applies to the entire governmental system, can be implemented. Proportional representation of minorities who constitute less than 1% of the entire population may be still possible in a large parliament, but in smaller committees its limits are soon reached. The participants shared the hope that Nepal will succeed in its transition from this praiseworthy constitution to a just implementation of the constitution.

A subsequent look back at history from a German and European perspective showed then that inclusive constitutions, as opposed to those that were individually dictated, were more successful and stable, to the extent that they possessed mechanisms for settlement of disputes and for further constitutional development. Germany itself was presented here as an example of a country with a constitution that was all-inclusive after the Second World War and at the same time implemented tools such as constitutional appeals and minority rights to enable challenges to itself.

Another concept that was brought in was that of specialised institutions that intervene between the legislative and the judicial arms and examine laws for their constitutionality even before they are passed, such as are usual in the Netherlands and the Scandinavian countries. Their purpose is to take the pressure off the courts and reinforce awareness of the meaning of the constitution on the part of the legislature and the population. These institutions are not completely unknown in Asia, as can be shown by the parallels to the Cabinet Legislation Bureau in Japan, which also acts in an advisory and monitoring function for the cabinet, or the Council of State in Thailand.

One goal of the research group is to address current legal policy issues, the resolution of which is a challenge from the point of view of the rule of law. Thus, with a view to the perceptible tendency in many places for the executive branch to assume or assign to itself more powers, there was discussion of whether there are situations in which the limitation of executive power lapses, such as under conditions of a fundamental threat to the existence or security of a country. Still unanswered is the question of a possible resolution to the conflict between the necessity for transnational regulation and the uncertainty as to its constitutional legitimacy. The doubt as to this legitimacy, combined with a widely-held attitude of anti-globalisation, leads to a lack of acceptance for transnational structures. No patent solution is apparent – as can be seen in international politics as well.

The workshop closed with the fourth and final session on the subject of “The Influence of Tradition, Monarchy & State Ideology in Asia’s Constitutional Development – Challenges & Considerations”. In Asia in particular, law and politics, and thus also the understanding of the constitution, are inextricably intertwined with history, culture, tradition and ideology. For that reason, it was essential to illuminate these factors as well in order to understand the broader picture.

The experts from Myanmar and Cambodia impressively presented the situation in their home countries in this regard. In Myanmar, there is the struggle against the remnants of the military dictatorship, which still make it impossible to change the constitution without the approval of the army. Another example was the peaceful change from Hinduism to Buddhism as the state religion in Cambodia, which permitted elements of both religions to flow into the monarchy and thus into the understanding of governance. In Cambodia, fundamental elements of our understanding of law, such as the separation of powers, are ascribed to the early kings.

Lastly, in a closing wrap-up discussion, the knowledge gained in the previous two days was summarised and an attempt was made to incorporate it into the overall context of constitutional practice and development in Asia. It was generally agreed by the experts that the research group should become a long-term institution in the region.

The Practice of Constitutionalism in Asia: Emerging Trends & Contemporary Challenges 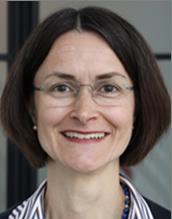