The New Romanian Government Coalition between Center-Right and Center-Left

In the governmental equation there were two major parties: Democratic–Liberal Party (PD-L) with 166 parliamentary seats and Social Democratic Party (PSD) with 163, and two other smaller parties, National Liberal Party (PNL) with 93 seats and Democratic Alliance of Hungarians in Romania (UDMR) with 31 seats. In the Romanian Parliament, there are also 18 national minorities’ representatives.

This parliamentary landscape allowed a relatively wide space for different governmental formula. As by Constitution, in Romania the head of the state is nominating the Prime Minister, the negotiation table was completed by president Traian Basescu, who conditioned the frame work for forming the government coalition by constantly announcing that he would only nominate a person coming from a center – right party, and of course from the best ranked one. The president also shaped the negotiation by presenting a short list of politicians that he would never nominate as a PM: PSD president Mircea Geoana and PNL president Calin Popescu Tariceanu.

Although not official, the negotiation started already in the voting night, immediately after the exit poll results were published. PSD, PD-L and PNL entered the negotiation having as non negotiable demands the Prime Minister position and some points from the electoral political program. UDMR expressed in favor of PD-L / PNL / UDMR government coalition.

After almost one week of negotiation, the only certain outcome was the agreement between PD-L and UDMR. As the negotiations between PSD and PD-L with the liberals reached a dead lock (officially because PNL asked for the PM, naming for this the present PM Calin Popescu Tariceanu), the only other two possibilities were that either PD - L, UDMR and the 18 national minorities would form a minority government, negotiating for extra parliamentary support or PD-L / UDMR and PSD form a big coalition.

PD-L and PSD leaders decided to form a large governing coalition arguing that the economical and financial crisis demands for a stable government. UDMR was no longer included in the governing formula, that being a non negotiable PSD term. It is important to stress out that this decision has, under no circumstances, any ethnical grounds. It is a political decision coming from the PSD need to secure its position in a government headed by PDL Prime Minister, making in this way the government more dependent on the social-democrats parliamentary support.

Following the constitutional procedure, president Traian Basescu was informed about the strong parliamentary majority reached, of over 70% parliamentary support. On December 10th the head of the state nominated Theodor Stolojan – prime vice president in PD-L, the as the next Prime Minister and 4 days later PD-L and PSD signed the coalition protocol, named “Partnership for Romania”, a paper that sets the rules of the internal cooperation between PD-L and PSD in the governing coalition.

Only one day after, while the two parties were negotiating the concrete administrative mechanism, Theodor Stolojan surprised the entire public opinion announcing that he renounces to the prime minister mandate entrusted by the president. He justified his decision by the fact that the two party presidents that signed the protocol should also assume the entire responsibility of the government and held the main positions in the government, as Prime Minister and Vice Prime Minister. He also proposed that the younger generation of politicians should step forward.

As Theodor Stolojan did not offer a plausible explanation for his withdrawal, several scenarios have been disseminated by mass media and political analysts, but in the end the one that gain more weight referred to the diminished powers given to the PM by the protocol between the two parties: the members of the cabinet are appointed by the party and not by the PM and also the PM does not have the right to dismiss any member of the cabinet without the approval of the party that nominated him/her.

The same day, president Basescu made the second nomination for the prime minister, the nominee being Emil Boc, PD-L president. In this new formula, the allocation of government positions went forward.

The final agreement between PSD and PD-L settled the following establishment:

The biggest surprise in the new gouvernment is the reappointment of the liberal Catalin Predoiu as Minister of Justice, nomination that certainly is meant to be a signal to the Euro-pean Commission. The new Prime Minister Emil Boc is aged 42, being the youngest Romanian Prime Minister after the fall of the communist regime. He holds a PHD in political sciences and political philosophy and is a law university professor. Emil Boc was elected as MP in 2000 and in 2003 became executive president of Democratic Party. In 2003 he was leader of the Democratic Party parliamentary group in Chamber of Deputies; vice president of the Constitutional Re-form Commission. In 2004 and 2008 he was directly elected as mayor of Cluj – Napoca. In 2005 he was elected as president of Democratic Party. 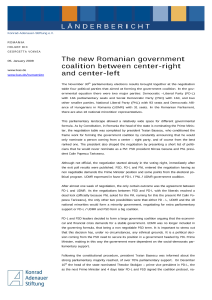