Where is Serbia's Vojvodina heading?

The Serbian autonomous province of Vojvodina has recently been in the headlines. This week its parliament passed a declaration aimed at defending its constitutional rights and autonomy. At a moment when Belgrade is finally starting to normalize relations with its former province (and now independent) Kosovo, the issue of decentralization is – willingly or unwillingly by some Serbian politicians – falsely associated with separatist tendencies of the Vojvodina government.
May 22, 2013 Ordering Information

Rather, a power struggle between Serbia’s two biggest political forces has now come to the surface and put the spotlight on one of the key challenges that will determine the success of political and economic modernization in the whole country.

A dispute has erupted between the province and the state: the Serbian episode in the classic struggle between the capital and the region, or between decentralization versus centralization. The centre-left – governing the province and being the biggest opposition force on the national level – champions provincial autonomy, while the nationalists (SNS) – governing the capital – regard further de-centralization as a threat to Serbian unity, especially in light of the April agreement made on Northern Kosovo (which both sides have supported). Although disagreeing markedly over the means, it is important to note that both sides seem to share a common aim: keep multi-ethnic and economically weighty Vojvodina within Serbia. It is through a dialogue that a compromise on the question of autonomy should be found.

Vojvodina, a region in the northern part of the country, is the breadbasket of Serbia and home to many minorities, notably a large number of Hungarians. In recognition of this ethnic diversity and economic weight, the province has enjoyed different degrees of autonomy, varying over the past several decades, and has come under renewed scrutiny since power changed hands on almost all levels in Serbia after the presidential, parliamentary, regional and local elections in May last year. The province, which is governed by a coalition headed by Serbia's opposition Democratic Party (DS), has been at odds with the central government in Belgrade, headed by the Socialists and Progressive Party (SNS), especially after the constitutional court ruled in the summer of 2012 some parts of the key law on the province’s jurisdictions illegal. The ruling was widely interpreted to curb some of the competencies of the provincial administration in Novi Sad, among them the opening of a representative office in Brussels to attract investors (other Serbian cities reportedly do the same, though).

The SNS and DS both seem to perceive their dispute as plain power struggle which could turn into a zero-sum game between de-centralization and centralization; a game that focuses on the distribution of public and fiscal revenues and the powers of the authorities of Vojvodina. Their quarrel escalated in April this year.

On 12 April, 10,000 people gathered in Novi Sad and protested against the alleged separatism of the provincial government. The day before, the DS-controlled provincial government, which is supported by the representatives of the regional Social Democratic and Hungarian parties, published a draft “Declaration on the Protection of (Vojvodina’s) Constitutional and Legal Rights” on the website of the provincial government. The document accused the government in Belgrade of violating the rights and competencies of the autonomous institutions in the province. It mentioned multiple violations of constitutional principles and legal regulations related to the rights and competencies of the Novi Sad authorities. This has reopened the long-running and latent struggle over the extent of Vojvodina’s autonomy.

A year after Milošević’s downfall, the first democratically elected government under prime minister Zoran Đinđić (DS) partially restored the autonomy Vojvodina had enjoyed between 1974 and 1990 – a move to learn from mistakes made under the Serbian dictator and his instrumentalisation of ethnic division and separation movements. This was supported by a large part of the population: In 2003 a poll held among Vojvodina residents claimed that 75 percent of the respondents were supporters of some degree of autonomy within Serbia.

Ten years later, according to a recent report by a regional NGO published in April 2013, the multi-ethnic character of the Vojvodina society, though changed, remains intact and that “in general, (...) minority rights are respected in educational, media, cultural and religious spheres.” Migrations have changed Vojvodina’s make-up over the past decade. Some of the region’s Hungarians emigrated during Hungary’s economic boom (up to 2008), while Kosovar and Bosnian Serb migrants settled in the area, making Serbs the majority in most of Vojvodina’s towns. But these processes have not lessened the economic weight of the province.

The province is at the crossroads of the most important north to south Balkan trade route connecting European Corridor 10 with the Danube canal system, a “geo-strategic knot” which has been targeted for special European investment funds. It houses both of Serbia’s oil refineries; the fertile plains of Vojvodina produce 80 per cent of the nation’s cereal products. Foreign investors have taken notice of this. There are currently over 240 foreign companies that have invested 6.7 billion euros – nearly a third of which in agribusiness – and are employing over 67,600 people. Back in 2002, proponents for more autonomy complained that Vojvodina provided 40 percent of Serbian state revenues, but only received 5 percent of the national budget in return. In ten years time this imbalance has barely shifted – the constitution guarantees at least 7 percent of the federal budget to the province in return for its contributions (estimated presently at around 25-30 percent) to the state budget economy.

After last year´s elections, the SNS formed a national government in Belgrade and managed to win the city of Vojvodina’s capital Novi Sad, but on provincial level the DS, under the leadership of the 43-year old incumbent prime minister and deputy party leader Bojan Pajtić, retained power there, as well as in numerous smaller municipalities. Losing control (by a margin of 3 mandates) over an absolute majority in the legislative assembly of Vojvodina, Pajtić now relies on the support of his coalition with the League of Social Democrats of Vojvodina (LSV) and the Alliance of Vojvodina Hungarians (SMV), the latter led by Ištvan Pastor, the speaker of the Vojvodina Assembly. After a heated debate, the regional parliament has with the votes of these parties adopted the controversial declaration on 20 May, one month after the political conflict between DS and SNS escalated and nearly a year after the restrictive judgment of the constitutional court.

Its text has been amended to suit the demands of the two minority parties as well as softened the disputed sentence on Vojvodina’s autonomy, “the historical and natural right of its citizens and of their will” having been removed. Even so, tensions remain high after the opposition street demonstrations one month ago and this month’s attempt by the SNS to force the resignation of Pajtić through collection of reportedly over 150.000 signatures. Pajtić has rebuffed the continuing accusations by his opponents of separatism and stated that “there never has been separatism in Vojvodina and there never will be” and that the SNS-led government in Belgrade was trying to “conceal its intention to take away (Vojvodina’s) autonomy." Serbia's Deputy Prime Minister and SNS leader Aleksandar Vučić countered that his party respects Vojvodina's autonomy, but that the constitution forbid anyone to "play separatist games”. Pajtić insists that the key reason for the Declaration is “Vojvodina´s funding”, which is “several times smaller than guaranteed in the Constitution”.

But the conflict between DS and SNS is not the only one, it seems. The young Pajtić, deputy party leader of the DS on the national level, takes credit for winning – against the national trend - 35 out of 42 municipalities in the province at last year’s elections. He seems to want to test the authority of his new boss in the party, Belgrade mayor Dragan Djilas, who took over from former president Tadic last fall. Djilas, who is still busy reforming his party after its disappointing performance during the elections and its continuing deteriorating popularity, did apparently not give his authorization for Pajtić’s declaration initiative . Whether Pajtić’s popularity will increase as a result of the successful adoption of the (non-binding) declaration, is not clear, even though it can be assumed (reliable polling data is not available) that on the provincial level the existing “transfer union” of money from Vojvodina taxpayers to the rest of the country is not met with enthusiasm.

What seems clear is that the outcome of the current power struggle(s) will not only determine the future success of the DS in Vojvodina and the rest of Serbia (not to mention the name of the party’s next leader), but also its level of cooperation with Serbia’s largest party, the SNS.

Despite all their rhetoric, accusations and public disagreement over the means, both political parties seem to share a common aim: keep multi-ethnic and economically weighty Vojvodina within Serbia. That should be the common basis for a necessary dialogue on how to reform the Serbian state. There are arguments for decentralising competencies and thus moving closer to the European principle of subsidiarity. Giving more power to the regions is one of the main objectives of the center-right coalition partner in the national government, the United Regions of Serbia, led by long-time economics minister Dinkic. He has not yet proven his determination to make this reality. Still, he has called on both sides to settle their disputes through dialogue. The (relative) economic success of the autonomous province, having - possibly with the exception of Belgrade itself - the most advanced economy and the most efficient state administration in Serbia, holds lessons for the underdeveloped regions of the Center and the South.

For the moment, the question of more (de-) centralization remains unresolved. After decades of seeing their rights and autonomy rescinded and restored, expectations among Vojvodina citizens for adequate autonomy may grow the longer this political stalemate continues. Playing up on highly unlikely scenarios – for Belgrade another Kosovo-like secession; or for Novi Sad, another Milosevic-like abrogation of autonomy – is not conducive to leading the whole country out of (economic) crisis. Regardless of their political color, politicians in Belgrade and Novi Sad should address their concerns over the future of Vojvodina’s autonomy through intensified dialogue between the capital and the province, leading to better coordination and cooperation. 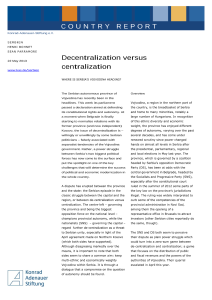