A Judiciary under Siege:

The paper traces the history of relations between the judiciary and other arms of government from the Mandela era in 1994 through to the presidential terms of Thabo Mbeki, Jacob Zuma and Cyril Ramaphosa. Focus then shifts to the themes emerging in the interviews. These themes are reflective of the challenges that the judiciary has experienced in recent times.
October 1, 2021 Ordering Information

Despite the ravages of COVID-19, the year 2021 is special in the calendar of South Africa’s democratic project. This is because the country celebrates 27 years after attaining democratic rule.
Twenty-seven is a magic number in South Africa. It reflects the number of years that the country’s founding father, Nelson Mandela, spent incarcerated for fighting apartheid rule. In addition, the country's globally acclaimed Constitution is turning 25. The Constitution of the Republic of South Africa (Act 108) was adopted in 1996 when then Deputy President Thabo Mbeki made the now infamous 'I am an African' speech.1 These milestones offer South Africa an opportunity to pause and reflect on the country's democratic project thus far. There are various lenses through which such an audit can be undertaken. These include processes such as the Judicial Commission of Inquiry into Allegations of State Capture (Zondo Commission) 2 and an economic lens as adopted by Brian Levy and colleagues at the University of Cape Town. 3 This paper seeks to add to the discourse on gauging the state of South Africa's democratic project by using a judicial-political approach. The Judicial Service Commission (JSC) interviews for judges held in April 2021 is used as a case study to analyze and reflect on the tensions between the judiciary and the other two arms of government - the executive and the legislature. 4

What emerges from the JSC judges' interviews is that over the last few years the judiciary has had to assume the role of defending the country's democratic project due to the dysfunction mainly in the executive branch but also in the legislature. This was a direct result of the other two arms of government not upholding their function in the country's democratic project. Theunis Roux writes that during the first decade of democracy the Constitutional Court and judiciary, in general, treated the two arms of government as' partners'.5 However, the courts have now assumed a vanguard role to protect the democratic project against subversion from the other two branches of government. The interviews, therefore, offer a condensed sense of what has essentially been a systematic attack on the judiciary since the Jacob Zuma era. 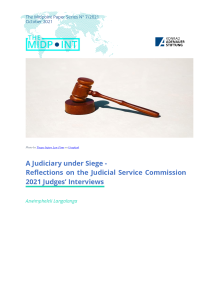