A view from five metropolitan municipalities

While voter abstention has been increasing, the findings of this report show it is a fluid phenomenon. There is only a small core of ‘hardened abstainers’ – only 14% of those who were eligible to vote in all three of the last elections abstained. As a result, most abstainers can be described as partial abstainers. On the question of the identity of non-voters, they are more likely to be young and students. They are also more likely to be Black African, Indian or Coloured than White. Income has a curvilinear relationship to abstention with non-voting higher at both the lowest and highest income groups. The majority of reasons for not voting related to a range of individual and administrative barriers. Of the individual barriers not being in your registered ward on Election Day was the most common, followed by being at work. The most common administrative barrier was not being registered to vote and this reason was particularly prominent among young people and students. Performance evaluations – that is reasons related to disappointments about service delivery – were the third most common explanation for not voting and more frequently discussed by poorer, unemployed and Black African citizens. Reasons related being uninterested and disillusioned were more frequently cited by men, amongst those with matric or higher education and among higher income earners. A lack of political alignment was mentioned in a small number of explanations overall but did more prominently feature in the explanations of higher-income earners. Publication by: Carin Runciman, Martin Bekker and Carol Mbeche
December 1, 2021 Ordering Information

The 2021 local government elections (LGE) witnessed the lowest turnout in democratic elections in South Africa, with a turnout of just under half of registered voters.1 This reflects a longer trajectory of declining voter turnout, which has been in evidence since at least 2009.2 As Collette Schulz-Herzenberg argues, voter turnout is a ‘crucial barometer of the vitality and health of a democracy’3 yet the reasons for voter abstention in South Africa are comparatively under-researched. Existing analysis has generally drawn from social attitudes surveys conducted prior to or sometime after the election in question.4 While such scholarship is valuable, it still leaves a gap in understanding what, precisely, is motivating voter abstention. This report seeks to address this gap through presenting an analysis of the profile of non-voters and their motivations for not voting. The analysis is based upon a telephone survey conducted within five metropolitan municipalities: eThekwini, the City of Cape Town, the City of Johannesburg, the City of Tshwane, and Nelson Mandela Bay. The survey was conducted between 2 November 2021 (the day after the LGE) and 16 November 2021. A full discussion of the methodology can be found in the methodological brief that accompanies this report. This report presents a preliminary insight into the reasons for abstaining in the 2021 LGE. 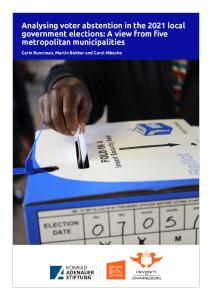