"This book pulls together the themes discussed at four conferences on the topic which were held from 2014 to 2018 and which were organised by the Konrad Adenauer Stiftung and the Institute for Accountability in Southern Africa , which campaigns as Accountability Now and of which the author is a co-founder and a director. The book succeeds admirably in achieving its main aim, which is to provide, in what the author calls ‘a digestible and easily accessible format’, the gist of those discussions." -Forward By: Mr Justice I G Farlam
May 21, 2021 Ordering Information

Corruption is one of the great scourges of our age. As this book makes clear, it is estimated that trillions of dollars are paid in bribes every year and that developing regions lose ten times more to corruption than they receive in foreign aid, with illicit outflows of the funds that they desperately need totalling more than 1 trillion US dollars per year. The reason for this is not a lack of laws prohibiting corruption in its various forms (there is no shortage of them) but the impunity enjoyed by those guilty of contravening them, resulting from their control of the institutions which are supposed to see to it that the law is enforced.

This book pulls together the themes discussed at four conferences on the topic which were held from 2014 to 2018 and which were organised by the Konrad Adenauer Stiftung and the Institute for Accountability in Southern Africa , which campaigns as Accountability Now and of which the author is a co-founder and a director. The book succeeds admirably in achieving its main aim, which is to provide, in what the author calls ‘a digestible and easily accessible format’, the gist of those discussions.

All persons with an interest in the combatting of corruption in its various forms will find much to inform them as to the nature and seriousness of the problem and as to how it may best be countered. They will be encouraged by the details which are given of countries where the necessary public will to vote a corrupt regime out of office has been created and where satisfactory measures have been, or are being, taken to root out corruption, to recover some at least of the proceeds thereof and to punish the offenders.

The book also contains an enlightening chapter on the protection of whistle blowers, by whose help many corrupt schemes can be frustrated and the miscre-ants responsible therefor punished. It is written by Cynthia Stimpel, herself a distinguished whistle blower, who saved SAA, and ultimately the South African tax- payers R256 million by courageously and to her own personal detriment disclosing a proposed illegal procurement transaction.
The book is being published at a very appropriate time because in June 2021 (unless the pandemic makes a postponement unavoidable) a special session of the United Nations General Assembly is to be held on corruption to deal with such issues as grand corruption, kleptocracy and state capture. Colombia has already given notice of its intention to propose the establishment of an International Anti-Corruption Court, modelled in some respects on the International Criminal Court, which was set up by the Statute of Rome. The book contains compelling arguments why this proposal should be accepted. A court based on the complementarity principle, as is the International Criminal Court, may prove, as the author says, to be ‘the most elegant solution to the problem’. This is because ‘(c)ountries not desirous of having their leaders internationally prosecuted would accordingly be incentivised to impose the anti-corruption and integrity measures on the home front.’ All persons involved in any way with the special session will be well-advised to obtain copies of the book. It will enable them fully to understand the issues at stake and to participate meaningfully in the debate.

A chapter which should prove of great assistance to those participating in the special session (whether or not they decide in favour of the establishment of an International Anti-Corruption Court) contains an account of a brilliant proposal by the Hon Kate O’Regan, a former justice of the South African Constitutional Court, that the sanctions scheme applied by the World Bank in respect of development projects funded by the bank should be followed and where necessary adapted by governments, lenders and procurers of goods and services when entering into procurement contracts.

The essence of the scheme as applied by the bank is that those to whom money has been lent have to account for every item of expenditure connected to the loan. If a credible and complete paper trail of the expenditure is not provided on a monthly basis, the bank simply stops advancing money and in the absence of an accountable explanation for the failure so to provide the borrower is blacklisted.

This system of sanctions effectively stamps out corrupt activities because the contractors, as it is put, ‘prefer the prospect of return business in future above the prejudice of being blacklisted’.

While this book records the joint conferencing efforts of Accountability Now and the KAS Rule of Law in Sub-Saharan Africa Programme, which is based in Nairobi, its relevance is global.
I G Farlam
(Retired) Judge of Appeal
South Africa 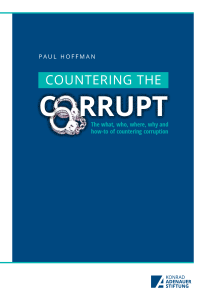