In 2019 general elections will be held in South Africa to elect the new National Assembly and new Provincial Legislatures in all nine provinces. While every adult citizen in South Africa has the right to vote, however the electorate must register to vote in order to be able to participate in the voting process. Under the motto #ICOUNT the Konrad-Adenauer-Foundation (KAS) in cooperation with the HDI For Good held seminars in various schools of Johannesburg.
October 13, 2017 Ordering Information 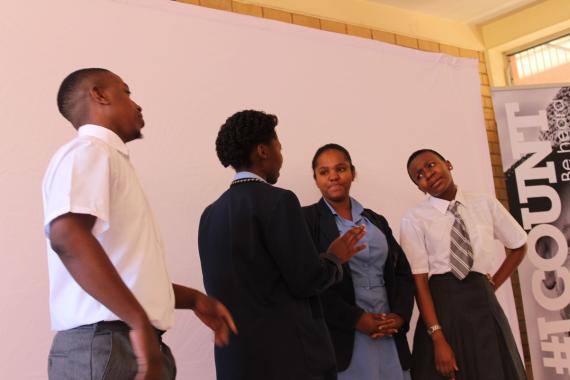 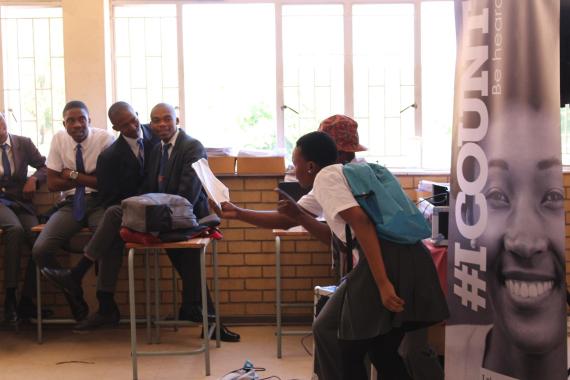 Ntsali and Pule playing Thandi and Sipho during #ICOUNT 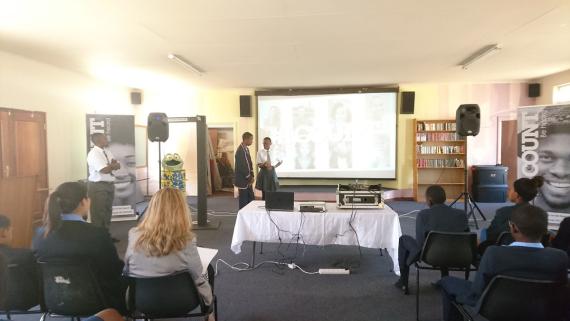 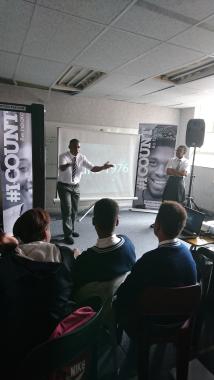 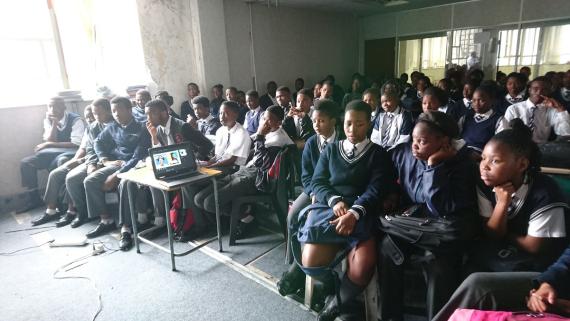 The aim of the #ICOUNT seminars was to empower and inspire high school learners with information about democracy, the electoral process and to highlight the importance of voting. The format of the seminar was an interactive play which sought to engage the learners, which was followed by a question and answers session and supplemented with information material. With the 2019 elections approaching, it is essential to give first time voters the necessary information about the voting process and to highlight the importance of the act of voting in itself. The seminar aimed at showing the learners that “change begins with you”. Every person who is eligible to vote has the power to use their vote to elect the leader/ party of their choice. If you are not satisfied with governance and service delivery in your community you must exercise your vote and elect a party which best represents your interests. Therefore, the seminar also focused on the fundamental importance of everyone’s personal opinion being expressed through a single, free and secret vote for each adult citizen and recalled the historical legacy coming along with the right to vote in South Africa.

Ntsali and Pule, both actors, were leading the seminar while playing the roles of Thandi and Sipho, two first time voters, reflecting on the act of voting through different stages of South Africa’s political history. Thandi and Sipho discussed the pros and cons of voting and interrogated the voting process. These discussion between the two characters, stimulated active participation with the learners, which were split into three time frames: June 1976 during the height of apartheid when the majority of South Africans did not have the right to vote, 1994 during the first democratic elections and 2019, the year of the crucial upcoming elections for South Africa, during which these learners will be voting for the first time. The seminars, structured around the representation of these three key moments, enabled the students and future voters to have deeper thoughts on the act of voting, to understand its importance as well as the responsibility it carries.

The seminar regularly emphasized the importance of voting through the “ICOUNT” motto that set the focus on everyone’s right to express oneself. It also offered the possibility to reflect on the limits of voting. Indeed, Ntsali and Pule actively engaged the students into participation, making them debate with the characters Thandi or Sipho or with fellow learners. During these discussions and debates, criticism towards voting was often raised. This led to sometimes heated discussions that enhanced the strength of this seminar. Discussing these critiques enabled their deconstruction and as it was the learners themselves leading the discussion and deconstructing their classmates’ arguments, their understanding of the importance of voting was guaranteed.

At the Sandtonview School for instance, learners defended strongly opposed opinions and were able to support these perspectives with valid arguments. Through their discussion they agreed on a certain consensus acknowledging the importance of voting, even if it might lead to disillusions. Through this discussion process, the seminar ensured the attention and enthusiasm of all learners.

In a later stage, the seminar provided technical information for future voters on the administrative requirements necessary for the voting act. As the procedure entitling South Africans to vote is quite complicated, this information was considered very useful by the learners. The seminar ended in an open round of questions which generally raised technical issues or learners needed more clarity on some aspects which were discussed. Nancy Msibi, representing the KAS, assisted the seminar in giving clear and enlightening answers to the learners’ inquiries.

The strength of the seminar laid in its clear linking of the importance of voting with everyone’s right of freedom of expression and in its provision of practical information on how to vote.