To commemorate Dr Frederik Van Zyl Slabbert, the FVZS Institute annually hosts an honorary lecture to honour his ideals and discuss current challenges. On the 19th of August, Marianne Thamm was invited as the keynote speaker on the topic Navigating your way in a world filled with untruths. The event was co-hosted and funded by the Konrad-Adenauer-Stiftung (KAS), a long-time partner of the Institute.
September 26, 2019 Ordering Information 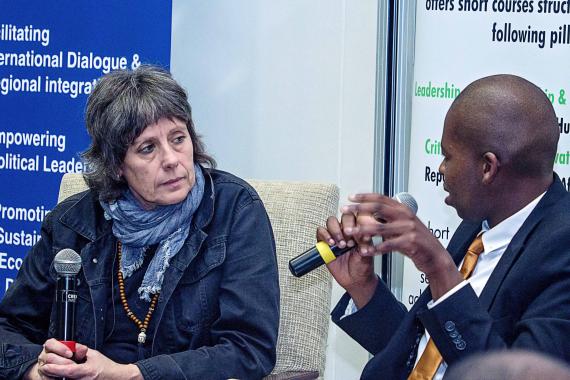 Marianne Thamm shares her insight in a Q&A session with the audience, moderated by Mkululi Nompumza 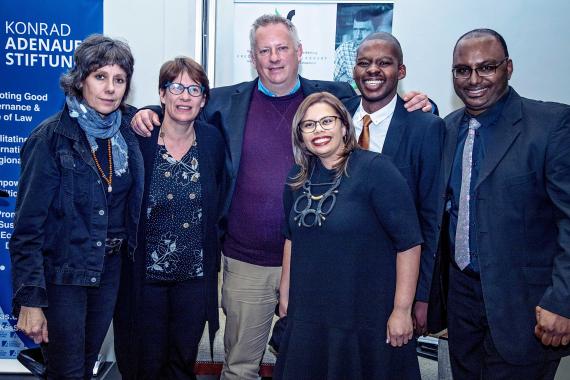 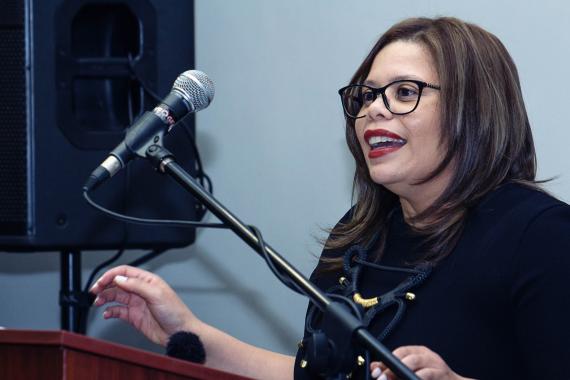 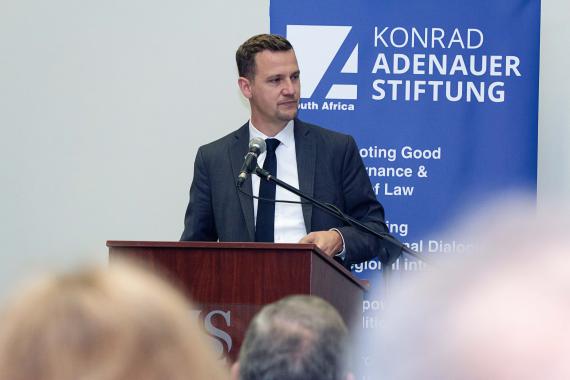 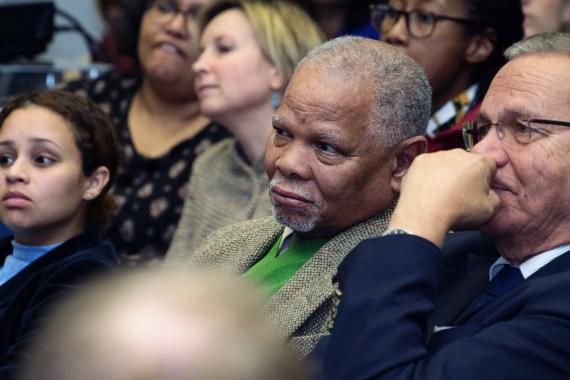 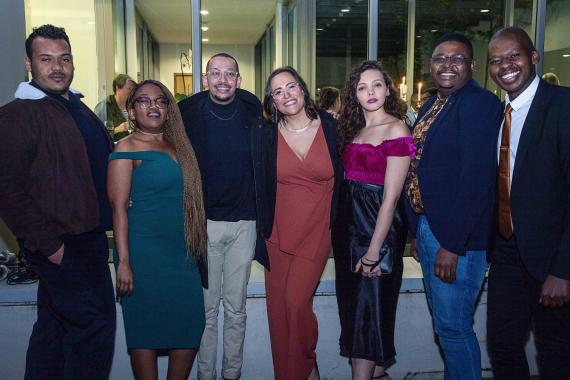 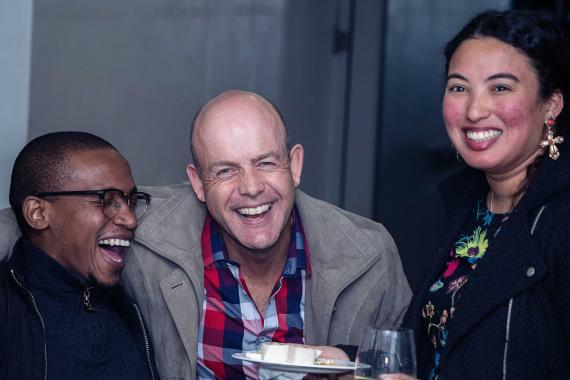 Much enjoyment in the meeting of minds
Dr Frederik Van Zyl Slabbert (1940-2010) was a respected South African politician, business leader and critical thinker. Promoting democracy and human rights, he was one of the most prominent opponents of the apartheid regime. Both inside and outside of Parliament he fought for the end of the oppressive system. Starting his political career in the early seventies, he joined the Progressive Federal Party, which he substantially moulded in the course of time. Resigning from Parliament in 1986, he continued his ambitions as part of various civil society organisations. His actions and ideals are internationally renowned and van Zyl Slabbert received several awards for his actions and his commitment to a free South Africa.

The FVZS Institute at Stellenbosch University, whose chancellor he was from 2008 to 2010, pays tribute to his person and continues his legacy. Founded in 2011, the institute promotes justice, democratic governance and human rights, encouraging partnerships and collaboration locally, regionally and across the African continent. The Honorary Lecture aims to initiate and fuel debates around Sub-Saharan Africa and South Africa in particular. Participants of the event are encouraged to internalise van Zyl Slabbert’s ideals, to follow his footsteps and enter into dialogue with each other. Students and representatives from academia, politics and economics as well as from the press and media are invited to attend.

Marianne Thamm was invited as the 2019 keynote speaker of the eighth honorary lecture. She is a well-known South African journalist, successful book author and stand-up comedian as well as the assistant editor of the online newspaper Daily Maverick. She is well known for promoting social courage and respected for the high quality of her research, which she presents in an outspoken, provocative style. She has won several awards for her work.

In her speech, Thamm spoke about the importance of honesty and free media. She observed an increasingly subjective interpretation of truth in the 21st century. Personal opinions and perspectives overwhelm the reference to verifiable facts. The border between truth and untruth is distorted and contested.

She stressed that objective facts must not be buried by subjective interpretation. South Africa’s fragile freedoms and peace are jeopardised by the tools of propaganda: the hiding of cold facts through altering and framing them in an untrue way. Corruption and lying, she claims, have already set the country and its young democracy back for years in its development. Millions have been deprived of the security and comfort the Constitution is to provide through what Thamm calls “organised lying”.

Due to the extended reach of modern news media a wholly different and alternative reality can be created based on fake news. This alternative world is delivered without balancing evidence, which makes it so dangerous. In the face of this variety of alternative realities, opinion makers such as politicians find themselves in a contest to wield the most effective narrative, rather than the closest reference to the truth.

This not only constitutes a new paradigm in politics but also equips the media with new power and relevance. Thamm views a free and accountable press, with principled investigative journalism that encourages the spreading of real facts, as the only effective response to disinformation. The internet represents an opportunity to uncover worlds of untruth, countering its current trajectory. While Russia has been aware of the opportunities and threats springing from the internet and extending its disinformation strategies for a while, we now see comparable tactics on the rise in the West thanks to Donald Trump and other populist politicians. Stealing personal data for surveillance and increasingly targeted electoral campaigning is part of the repertoire. State institutions end up significantly weakened. More benign forms of mass persuasion have to be strengthened and above all democracy must be sustained.

The media’s new power generates new dynamics. Journalists encounter increasing hostility worldwide as the manufacturers and distributors of disinformation are threatened. Traditional media, with a culture of editing, fact-checking and accountability, is being dismantled by global information behemoths such as Google, Twitter and Facebook and openly undermined by some political leaders.

Thamm clarifies that nowadays journalists have to decide for themselves which side they want to serve, whether it is the government, the Constitution, the people or something else. In order to navigate one’s way in this world of untruth, each of us must search for the hard facts and reality.

Why has KAS supported this event and what was the aim of the Annual Honorary Lecture 2019?

Frederik Van Zyl Slabbert achieved progress through critical thinking. His legacy is contains to stimulate critical thinking. The Konrad Adenauer Foundation supports a questioning and discerning attitude among young people and strives to initiate this through events. This year's annual honorary lecture was held under the theme of Navigating your way in a world filled with untruths and is in keeping with Van Zyl Slabberts' credo of scrutinising social conditions: “The values that guide the intellectual investigation have been distilled over time in a rigorous debate: Objectivity, openness to contradictory evidence and critical examination of assumptions.”

In a time of fake news it is especially important to question what is presented as facts and hold on to the truth. The Konrad-Adenauer-Foundation regards it as one of its responsibilities to foster an open and critical mind-set. Through educational and advisory measures, the Foundation encourages young people to take an active, responsible and knowledge-based part in the political shaping of their country. In a world increasingly affected by organised lying and disinformation it is vital to stimulate challenging thoughts on politics and society. 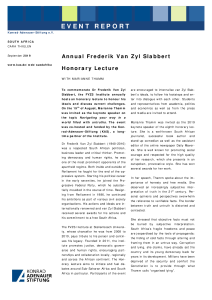