The brand-new key reference work on the South Africa election, titled “Election 2019: Change and Stability in South Africa’s Democracy, edited by Dr. Collette Schulz-Herzenberg and Prof. Roger Southall, is now out in the bookstores. The book provides an indepth analysis of the 2019 elections. The contributors are well respected experts in their own right, some of whom have contributed chapters to the previous books on elections. During the week of 19th-23rd August, the Konrad-Adenauer Stiftung (KAS), hosted book launches in cooperation with Jacana Media, Exclusive Books and Ike’s Books and Collectables where some authors presented their chapters and engaged with the audience.
September 6, 2019 Ordering Information 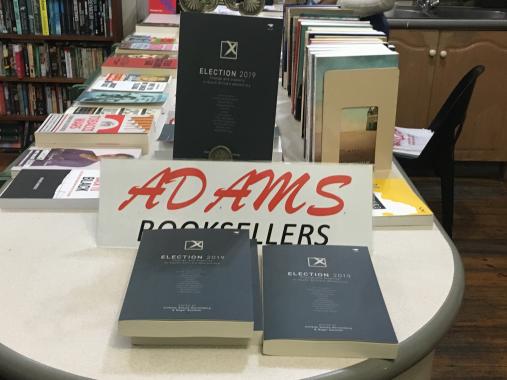 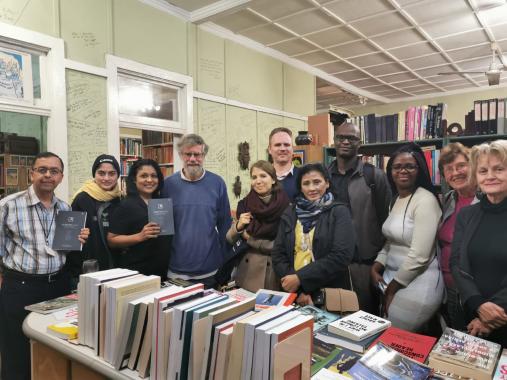 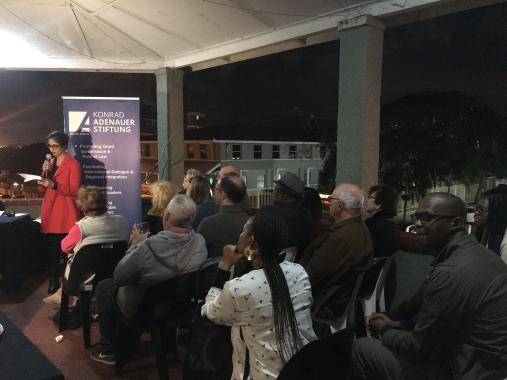 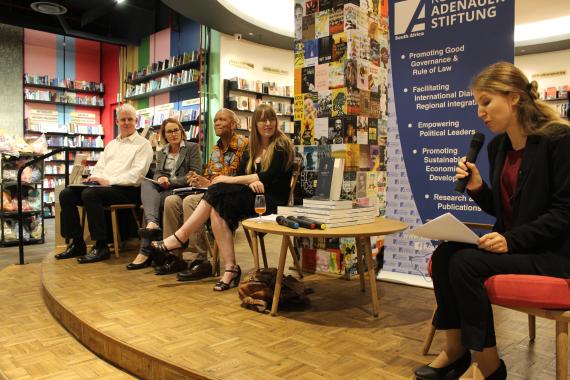 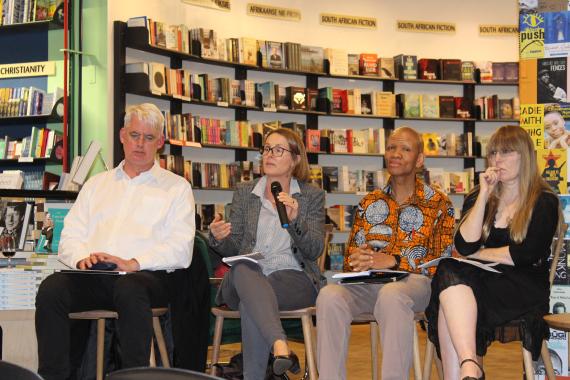 The panel in Johannesburg 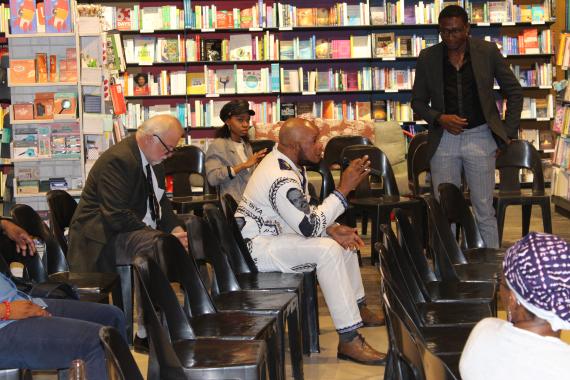 The audience in Johannesburg 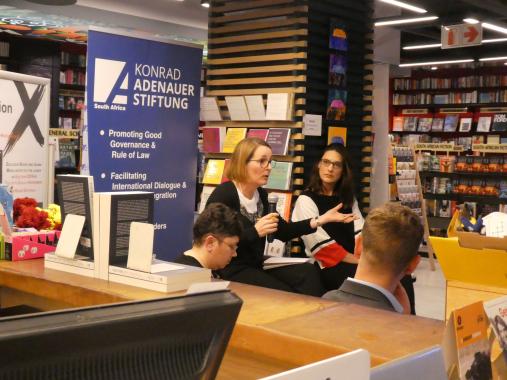 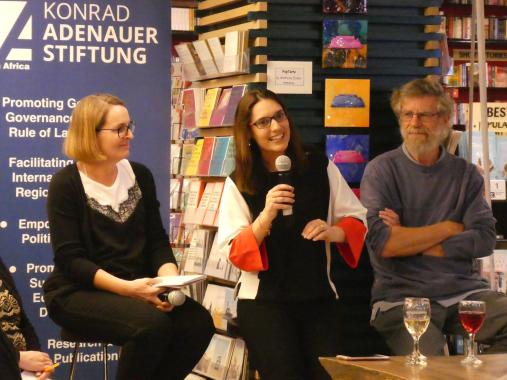 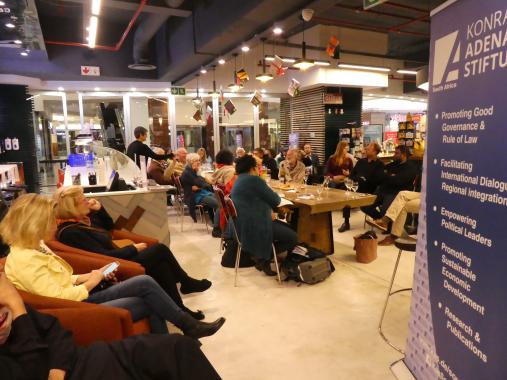 The audience in Cape Town
ELECTION 2019 is a peer reviewed publication and it is the third book in a thematic series published by Jacana Media with the support of KAS. It follows Zunami! The 2009 South African Elections, Election 2014 South Africa: The Campaigns, Results and Future Prospects. Although the Electoral Commission of South Africa (IEC) provides excellent data, care needs to be taken to ensure that the there is a proper compari-son of the various elections. KAS also funded the publication of Local Elections in South Africa: Parties, People and Politics which was based on the Local Government Elections of 2011.

The sixth general election in 2019 since the advent of democracy occurs at a critical moment in South Africa’s history. Therefore the immediate question this book poses is: will the ANC manage to secure a sixth electoral victory despite its disastrous record in government since 2014? The answer lies in the popularity of Cyril Ramaphosa, the African National Congress’s (ANC) capacity to forge political unity when confronted by the risk of losing power, established voting trends amongst older voters, a sharp decline in participation among the youth which might otherwise have produced electoral shifts and the failure of opposition parties to present themselves as viable alternatives.
Therefore the subsequent question in this book is what will be the consequences of a sixth successive election victory for the ANC for South Africa’s democracy. Will the ANC’s triumph provide a sufficiently strong mandate for Ramaphosa to turn South Africa around, or will he fail to overcome Zuma’s allies within the party? Whether he succeeds or fails, will the ANC manage to hold itself together? Is the future and quality of South African democracy dictated by whether the ANC stays together or splits into rival factions?

The three events were attended by over 70 participants. The first event was held at Exclusive Books in Sandton, Johannesburg. The panel was comprised of Dr. Collette Schulz-Herzenberg (University of Stellebosch), Prof. Anthony Butler (University of Cape Town), Prof. Jane Duncan (University of Johannesburg), and Prof. Kealeboga J. Maphunye (University of South Africa). The discussions were moderated by Dr. Siphiwe Dube, Head of Department of Political Studies, (University of Witwatersrand). Michaela Braun, Project Manager, gave the welcoming remarks on behalf of KAS.

The second event took place at Ike’s Books and Collectables in Durban, the panel was comprised of Prof. Roger Southall (University of Witwatersrand) and Dr. Benjamin Roberts, Human Sciences Research Council (HSRC). The discussions were moderated by Dr. Shauna Mottiar, Director of Centre for Civil Society.


Henning Suhr, Resident Representative of KAS South Africa and Michaela Braun of KAS pointed out in their welcoming remarks, that democracy needs continuous engagement and participation by citizens – especially in the context of elections. Therefore, ELECTION 2019 produces accurate and comparable information about South Africa’s 2019 election. It is highly recommended as teaching material for institutions of higher learning.

Dr. Collette Schulz-Herzenberg introduced the South African elections of 2019 and presented the trends in voter participation, in general the registration, turnout and the disengaging electorate, as well as the 2019 national election results. The polls before the elections suggested a clear rise in independents, or ‘floating voters’ in South Africa. While independents are harder to mobilize, they are more open to persuasion and shifting their vote across parties. These voters were also likely to have been late deciders, making a decision about which party to support towards the end of the election campaign. There was a substantial decline in voter turnout from 73% in 2014 to 66% in 2019 (voter turnout is the pro-portion of registered voters that cast their vote).
Only 49% of eligible voters voted in this election. The possible reasons for the decline are decreased party loyalty and party identification, increased importance of party performance when the voting population is less partisan and hence more discerning, as well as, the impact of unregistered young voters.
Reviewing specifically the African National Congress (ANC), only 28% of eligible voters cast their vote in support of the ruling party. Furthermore, evidence shows that some people who would ordinarily not support the ANC chose to vote for the ANC because of Ramaphosa. Another factor that kept the ANC in power is that voters failed to identify with any of the other options available, according to Schulz-Herzenberg. On a positive note South African elections are going to become unpredictable in the future. This will lead to more competition between the parties and this is healthy for democracy in general.

Prof. Kealeboga J. Maphunye, author of Credible but flawed: The management of the elections. There were around 23 000 voting stations. Whereas voting generally proceeded well there were some incidents like the arrest of nineteen people for alleged "double voting" in three KwaZulu-Natal municipalities, the elderly woman who died while trying to cast her ballot as well as the tragic death of an Eastern Cape deputy presiding officer. Furthermore, during the elections there was some controversy over the quality of the indelible ink used to mark voters and prevent double voting.

Prof. Jane Duncan, author of Beyond the botnets: The media and the 2019 general elections. In her presentation she mentioned that social media was widely used by political parties and their members to fur-ther their agendas in the 2019 elections. Twitter was commonly used as a platform for campaigning, although the number of followers didn’t translate into actual party support.

Prof. Anthony Butler, author of A campaign born of desperation: The ‘good ANC’ battles the ‘bad ANC’. The leadership of Jacob Zuma was plagued by corruption and a lot of scandals. There was evidence of state capture and influence from the Guptas and other influential business people who had close ties with Zuma. There were fears of a possible split of the ANC. Still, the ruling party remains sharply divided between the pro- and anti-Zuma factions. This inner conflict was still an influential factor in the campaign of the ANC.

Prof. Roger Southall, co-editor of the book and author of South African democracy at risk? The troubled context of the 2019 general elections pointed out that political extremism and right-wing populism are on the rise globally. However, South Africa did not follow this international trend. Seventyeight percent of the votes cast were in favour of the ANC and Democratic Alliance (DA) - that shows centrist tendencies instead. Likewise, the more radical Economic Freedom Fighters (EFF) did not grow in expected margins. The electorate imposed its discipline on fringe parties, as only 14 parties achieved representation provincially or nationally out of the 48 parties on the ballot paper.

Dr. Benjamin Roberts, author of The Economic Freedom Fighters: Authoritarian or democratic contestant? pointed out that the EFF was the party that grew the most since the 2014 election with major inroads in Kwa-ZuluNatal, Mpumalanga and the Northern Cape. Through investments in party branch and regional infrastructure it reflected a determination to escape the regional and ethnic confines of its early supporter profile. Although the EFF has set the political agenda in some fields, their manifesto pledges remain largely symbolic and despite gender parity in party structures, only two members of the central command are women. Although the ANC, the EFF and the (DA) received 89% of the votes cast, smaller parties still got attention because of their potential as king makers in coalition governments. Especially in the contested provinces of Gauteng and the Western Cape they saw media attention for that reason. As it panned out, all provinces were won in absolute majorities, so no coalitions were needed added Schulz-Herzenberg.

Dr. Cherrel Africa, author of The smaller parties: Who’s in and who’s out? said, that smaller parties tend to blame their modest success on a lack of resources. However, a better explanation of their failure to gain support is to be found in organisational depth, party structures, track record, communication strategy and leadership unity.

At all three events participants were actively engaged with comments and questions for the panelists.

• Credible but flawed: The manage-ment of the elections. Kealeboga J. Maphunye.

• A campaign born of desperation: The ‘good ANC’ battles the ‘bad ANC’ in the electoral last chance saloon. Anthony Butler.

• The Democratic Alliance at a cross-roads: The quest for afro-liberalism. Zwelethu Jolobe.

• The smaller parties: Who's in and who's out? Cherrel Africa.

• Beyond the botnets: the media and the 2019 general elections. Jane Duncan. 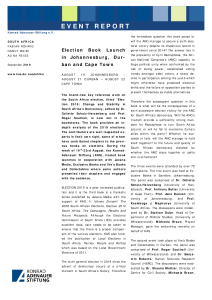