“Reconciliation and Restitution in South Africa” was the theme of a breakfast discussion, which took place on 5th October 2016 at the Townhouse Hotel in Cape Town. The event formed part of a breakfast discussion series, jointly hosted by the Centre for Constitutional Rights (CFCR) and the School of Public Leadership (SPL) at the University of Stellenbosch with the financial support of the Konrad-Adenauer-Stiftung (KAS).
November 10, 2016 Ordering Information

Under Apartheid many crimes and human rights violation were committed and still today South Africa is struggling with the Apartheid legacy, such as poverty, unemployment and inequality. However, the country tries hard to overcome its past and promote national unity and social cohesion. Many initiatives, often spearheaded by churches and faith based organisations, are under way that aims to foster Reconciliation and Forgiveness. Political and social actors are aware of the fact that reconciliation brings peace and recovery for societies such as South Africa, which are characterized by having to deal with a traumatic past. After the end of Apartheid, the Truth and Reconciliation Commission (TRC) was established based on the National Unity and Reconciliation Act from 1995. The purpose of the Commission was to document and uncover human rights violations under Apartheid, bring closure to the relatives of victims and finally to restore the dignity of victims.

The two speakers of the event were Henry Matthys, Chairperson of Freedom Park Western Cape and Kevin Chaplin, Managing Director of the South African Ubuntu Foundation and the Amy Biehl Foundation. First, Mr. Matthys focused on the development and challenges of the reconciliation process. He explained the preconditions for a reconciliation process. After the first democratic elections took place in 1994, the nation first had to understand, that a young democracy can only succeed if people have the intention to live peacefully together. He emphasized, that reconciliation alone is not enough to unite a nation. What is additionally needed for a nation to develop a sense of unity is closing the gap between rich and poor and essentially provides equal opportunities for all members of society.

The second speaker, Kevin Chaplin focused on the psychological aspect of reconciliation. In his opinion we have to look where we and others are coming from and what different experiences have shaped us. Only by being able to look through the other persons eyes we can understand how they feel and how they perceive the world that surrounds them. That is why the issue of reconciliation is complex and requires all of us to engage and interact with other people with different backgrounds. 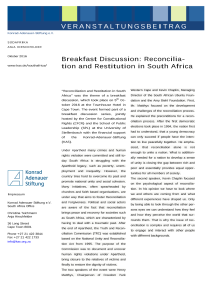