Book launch: "Democracy under Threat - A Crisis of Legitimacy?"

On the 20th of September, the Konrad Adenauer Foundation South Africa (KAS) in cooperation with the South African Institute of International Affairs (SAIIA) and Transformation Research Unit (TRU) - University of Stellenbosch hosted the book launch of “Democracy under Threat – A Crisis of Legitimacy?” edited by Ursula van Beek. The event was held at the Headquarter of SAIIA. It was attended by over fifty delegates consisting of diplomats, politicians, academics as well as students.
September 26, 2018 Ordering Information 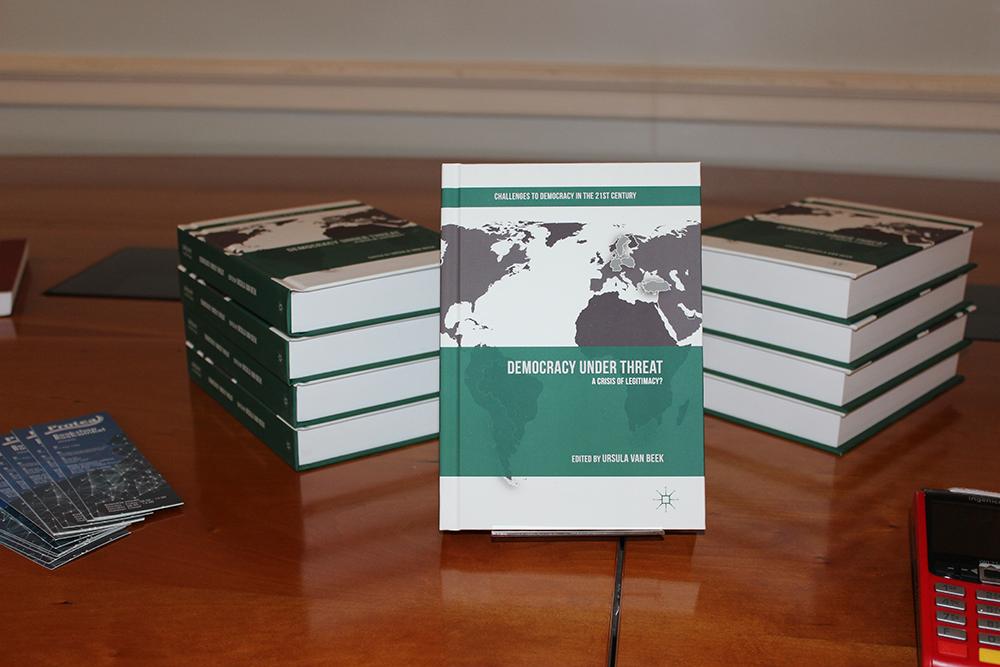 "Democracy under Threat - A Crisis of Legitimacy?" edited by Ursula van Beek. 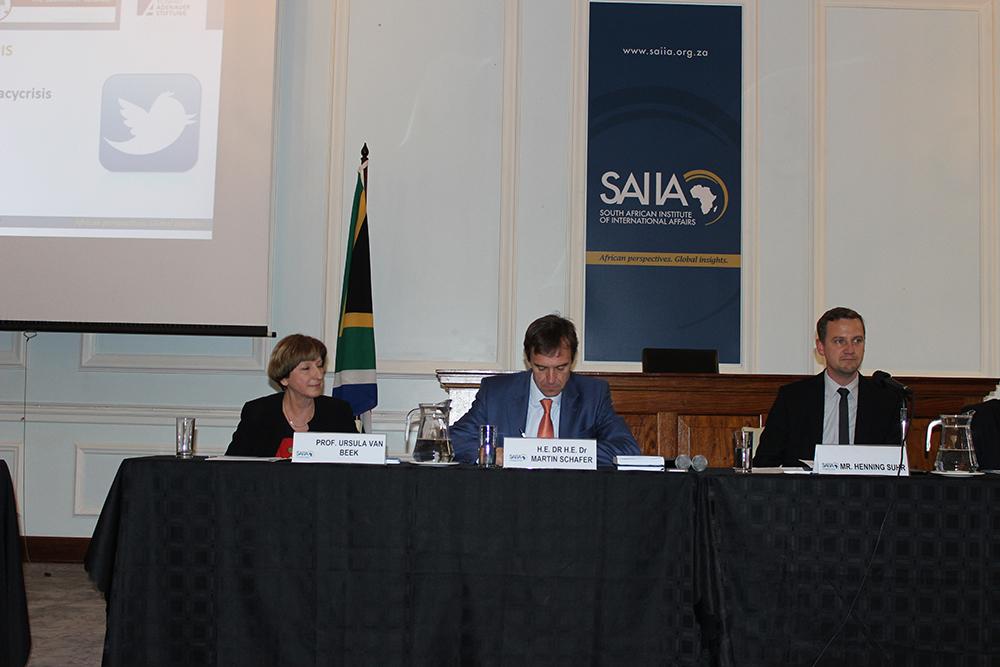 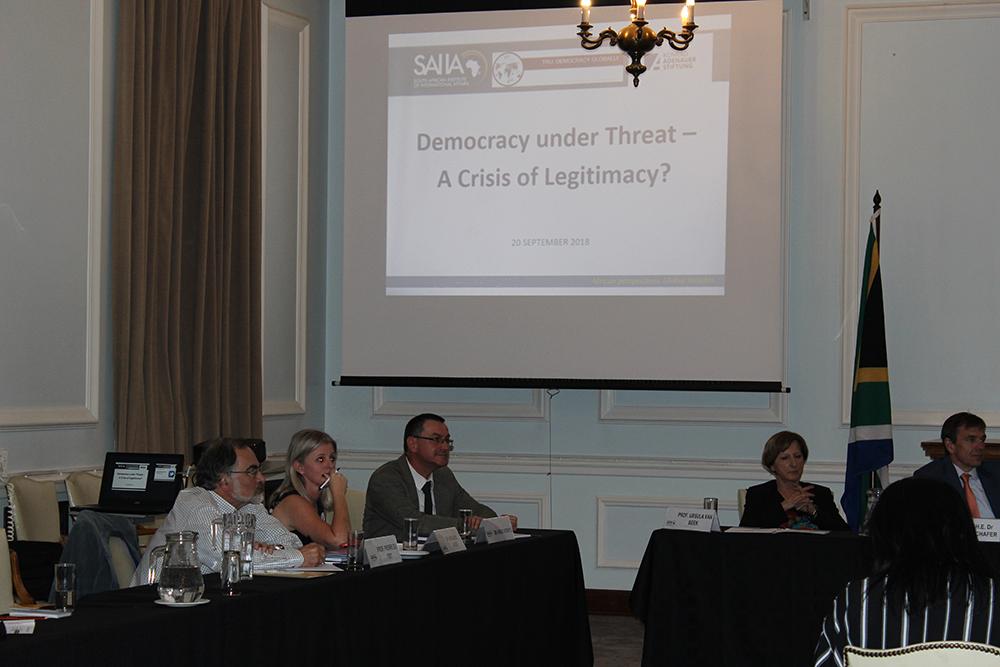 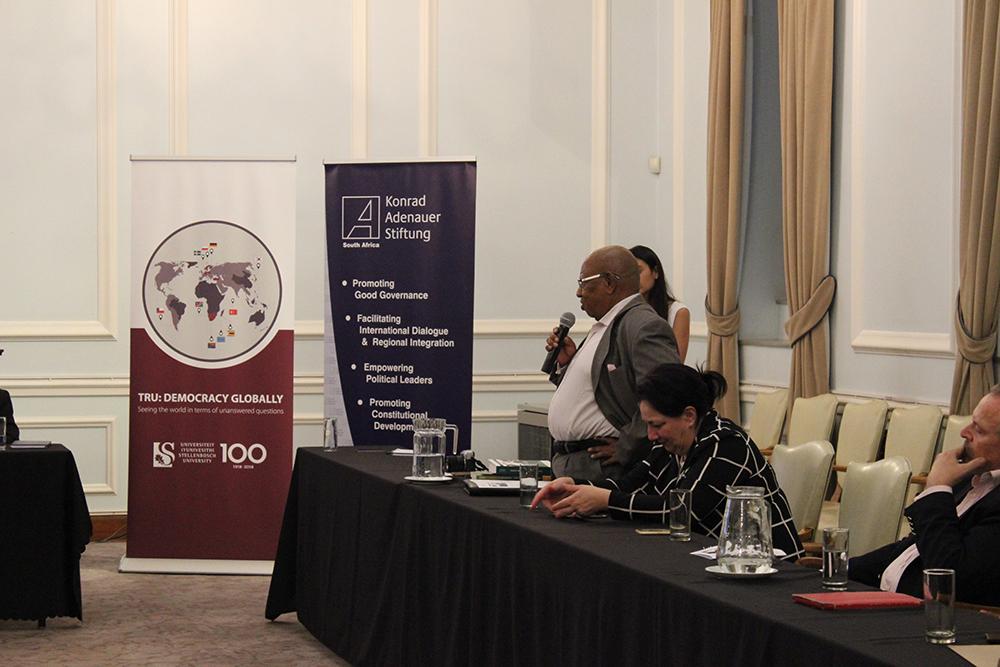 A guest during the Q&A session. 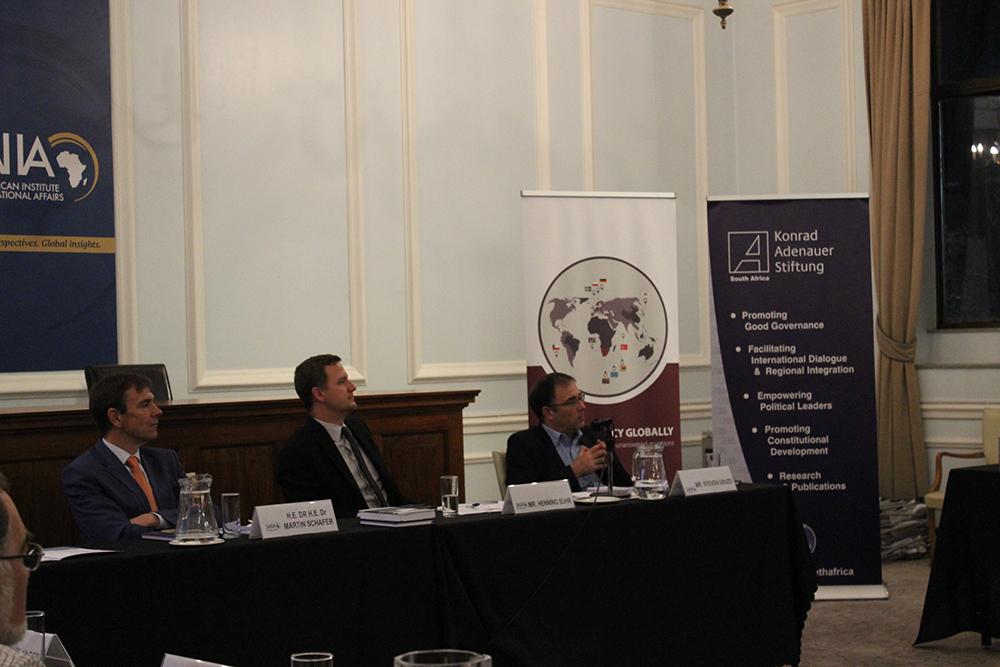 The panel engaging with the audience during the Q&A session. 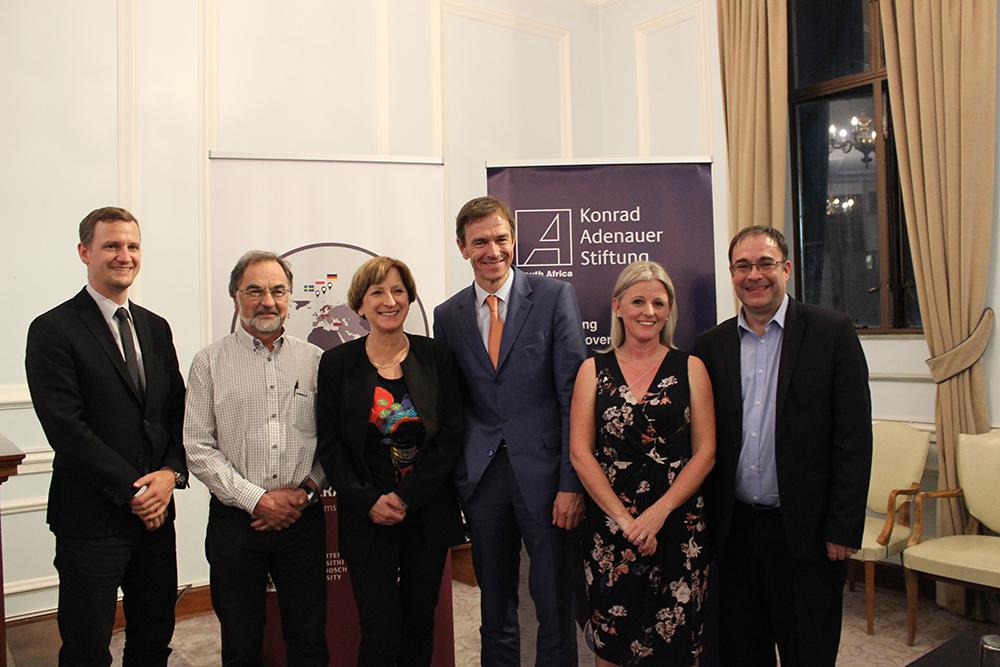 Building on nearly two decades of studying democracy across major global cultures, this book addresses some of the challenges that democracy and the legitimacy thereof are confronting in the current global and regional context. This book launch not only provided a platform to introduce this academic work to the audience but also facilitated a dialogue about the democratic landscape of the world and South Africa.


Steven Gruzd (Head of the Governance and APRM Programme, SAIIA), welcomed the guests. He was followed by Henning Suhr (Country Representative, Konrad Adenauer Foundation) who expressed his gratitude towards SAIIA for co-organizing the event and appreciation to the authors who contributed chapters to the book especially also to the four authors who attended the book launch. He emphasized the importance and necessity of a democratic system, on which KAS is working with many partner institutions all over the world. Not only the government but also the quality of democracy should be studied thoroughly, which has been carried out in the studies compiled in this book. Among the threats looming large for democracy, Mr Suhr’s talk focused on the phenomenon of rising populism, which might put South African’s young democracy at risk. He said “it is time to reflect on how we can create a stronger social cohesion and achieve political compromises between the different forces for the greater good”.


H.E. Dr. Martin Schäfer - German Ambassador to South Africa gave the opening address. He highlighted the shared history of Germany and South Africa as the beacon of hope for democracy. Reflecting on the era of globalization, the two countries also profit from the many changes this process brings about. However, the long history of German democracy has been challenged by the changing political landscape, which was influenced by the rise of the right extremist and populist thinking, the problems of identity and the migration crisis. This trend in the German political landscape came unexpectedly as the country has moved on from the dark chapter of the 20th century. The similar change was also observed in other European countries like France, the Netherlands and Poland as well as the UK. On the other hand, South Africa is facing the threat caused by the incapability of political leaders in delivering their plans and promises they make during election campaigns. Hence, the transformation process has been standing still due to inadequate or insufficient effort from the government. Consequently, social and economic injustice still lingers on after the dawn of democracy, which, unfortunately, puts the democratic regime under threat. The Ambassador suggested a number of solutions but he emphasized the most important factors such as good governance, accountable political leaders and a political framework that gives the guideline to the governing regime. Strong and robust debates must serve as the basis of democracy in contrary to populist thinking. To conclude, he highlighted the engagement of both South Africa and Germany in international orders and the liberal, democratic orders as the guideline to maintain a sustainable democracy.


Thereafter, Professor Ursula van Beek (Founding Director, Transformation Research Unit – University of Stellenbosch), the editor of the book, delivered the introductory remarks on the publication. This book is built on a history of monitoring democracy for more than two decades in several countries across all major cultural regions of the world. The consecutive projects on democracy were first conducted by an international team of researchers known as the Transformation Research Initiative (TRI) based at the University of Stellenbosch. Since 2015, the informal team has been institutionalized at the University as the Transformation Research Unit (TRU). This collective work of fourteen contributors does not only examine and analyze democracy in the case study countries; it also takes two aspects bearing heavily on democracy that receive much attention on the global level. The first considers the nature and severity of which globalization puts the sustainability of the welfare states under with regard to the emergence of populism. The second aspect is the impact of the “screen culture” on the legitimacy of the democracy, embedded in television and internet. On one of the limits of the book, Prof. van Beek stated that the data used for the research was only available until 2014. In this book, Prof. van Beek also wrote a chapter examining the liberal democracy of Poland and co-wrote a chapter on the question of legitimacy in temporary democracies.


The introductory remarks of Prof. Ursula van Beek were followed by the presentations of the other authors presenting at the event. Prof. em. Pierre du Toit (University of Stellenbosch) gave the audience a brief overview of the chapter he conducted: “Global Electronic Screen Culture: Legitimacy at Stake?”. In the era of digitalization, the digital world offers a platform for social cohesion, a channel to mobilize people for causes and communities where like-minded people are connected. Also through this channel, the state or political parties can collect data of users and utilize it for propaganda and manipulative purposes. Under these circumstances, a regulation proved to be necessary, however, is difficult to be implemented. Dr. Nicola de Jager (Senior Lecturer, University of Stellenbosch), the co-author of the chapter “Political Radicalism: Responding to the Legitimacy Gap in South Africa”, presented her studies on certain indexes showing the challenges to democracy in South Africa. Using data from the World Value Survey, Dr. de Jager indicated a tendency of declining in government performance assessment and institutional trust, which led to the outcome of decreasing favorability of a democratic government. Dr. Krige Siebrits wrote the chapter titled “Globalization and Social Protection: An Economic Perspective”. In his chapter, Dr. Siebrits discussed the conjecture that globalization has exposed the citizens of high-income democracies to more severe economic and social risks via labour market effects and by inducing contractions in the scope and generosity of social protection systems. These effects were linked to the legitimacy of democratic systems in OECD countries and the resurgence of populism in some of those countries.


Adjacent to the presentations were various questions and comments from the delegates. One of the concerns that were addressed to the panel was the sampling frame used in the research, whether it was representative of the adult population in South Africa and also whether the views are a true reflection of the perceptions of South Africans as a whole. Overall, the event was successful in introducing the book and giving a brief overview of the topics covered to the audience. 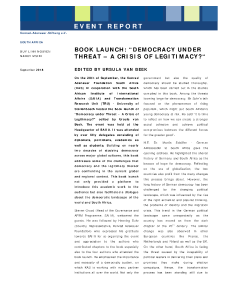 Democracy under Threat – A Crisis of Legitimacy? in Johannesburg