On September 17th, 2019, the Konrad-Adenauer-Stiftung (KAS) together with the South African Institute of International Affairs (SAIIA) and the Mountain Club of South Africa invited Tim Hughes as a keynote speaker on the subject of corporate diplomacy. During his speech he pointed out how multinational enterprises (MNEs) increasingly influence individual lives and political power.
October 7, 2019 Ordering Information 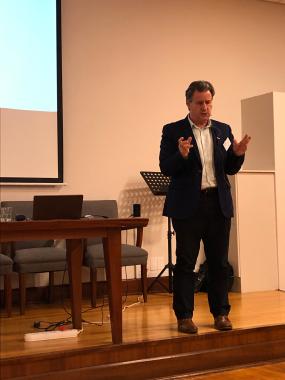 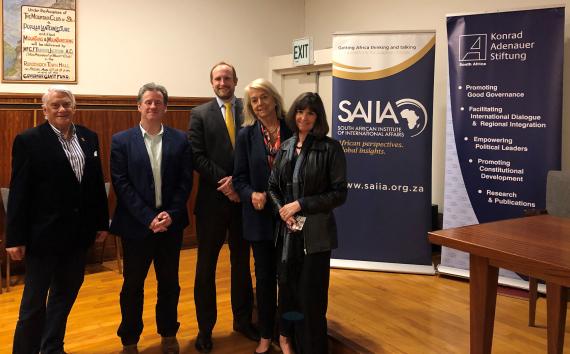 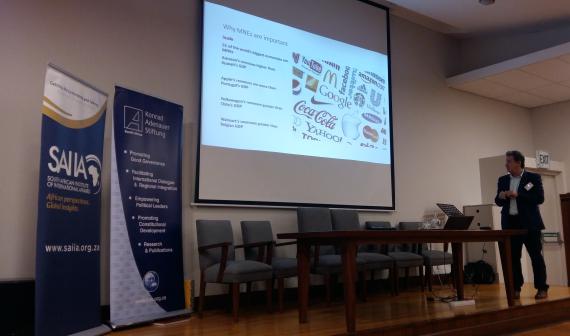 During Hughes' speech
Tim Hughes is a former researcher at SAIIA. After working in academia, he founded and managed SAIIA’s Parliamentary Office. In this function he ran several important areas within the organisation, including the research department and the section for investment advisory and provision of government relation services to corporate members like MTN and Woolworths. As the lead researcher on the SADC Futures Project he was the head of the team that drafted possible future scenarios for the South African Presidency. He served as Nelson Mandela Researcher for the BBC and has published two books as well as edited another 24.

Throughout his academic career, Hughes dug into various research topics and has gathered profound knowledge on diverse fields.

In speaking about corporate diplomacy, Hughes refers to the phenomenon of huge corporations that exercise a tremendous influence on everyday life. Often regarded as a special kind of threat, they have the potential to subvert the state monopoly of power. However, in the face of today’s far-advanced globalisation, multi-national enterprises are confronted with multiple challenges of cross-border and -cultural kind that remain to be explored.

The concept of corporate diplomacy itself is, according to Hughes, ill-defined. While diplomacy implies that respective firms operate in an international environment, they have to satisfy local governments and a much broader variety of stakeholders (e.g. customers, suppliers, employees, other local authorities…). By addressing different kinds of actors, MNEs can effectively change the rules of the system in which business is conducted, which facilitates the accomplishment of their goals. Hughes’ settles on definition of corporate diplomacy as the complex exchange of MNEs with different kinds of stakeholders, which are convinced, charmed and cajoled to seek a win-win result.

To provide insight into how MNEs operationalise corporate diplomacy, Hughes introduced the DIPLOMacy-model by Witold Henisz. The model’s name is an initialism, i.e. the first six letters are used to unpack further concepts that begin with the same letter. Hence “D” unpacks to: Through Due Diligence, a profound stakeholder analysis is completed. Relevant stakeholders have to be (“I”) Integrated into the core business and mapped accordingly. The relations to stakeholders must then be (“P”) Personalized to sustain them. Furthermore, (“L”) Learning processes continue steadily and must remain incomplete to adapt humbly to the feedback of the environment. Through (“O”) Openness MNEs communicate strategically to reinforce their reputation and the stakeholders’ trust in them. Finally, an outward-facing and long-term (“M”) Mindset has to be cultivated.

Proceeding from this approach, Hughes derives several assumptions about how corporate diplomacy works in practice. MNEs gain a tremendous amount of power in our current age by administrating their stakeholders. They not only intervene in the political decision-making processes, but obtain huge profits. Of the hundred biggest economies worldwide, 51 are corporations. This means that, for example, the company Apple earns more revenue than Portugal’s GDP, while the companies Volkswagen and Walmart outrank Chile and Belgium’s respective GDPs.

Enterprises thus nowadays have the potential, so Hughes, to manipulate and act on the highest scales of power. In comparison to governments, firms are more tangible to citizens because of the products they sell. Large-scale actors become directly integrated into the daily life of individuals. Furthermore, the global reach and value chains are only to a limited extent bound to national borders. They have the ability to produce flexibly and cross-jurisdictionally, sell globally available products on a local level and hence benefit from economies of scale and growth.

Hughes differentiates between three different kinds of power of MNEs.
First of all, MNEs hold instrumental power, which includes the deployment of resources and measures to achieve a specific aim. This also includes lobbying strategies. In the USA, publicly reported sums invested in lobbying amount $4 billion, while the dark figure is said to be about 30 times higher. For Brussels and lobbying on an EU level the numbers are constantly growing as well.

Secondly, MNEs have structural power, which refers to the power of investments, legal rights and taxing. Capital, people and technology are more mobile today and can be located strategically. All kinds of strategies are employed to save on tax, e.g. by acting in legal grey zones through parking money in tax havens. As a result, MNEs deprive states of resources that are due to them.

Finally, multinational enterprises exercise discursive power over consumers of their end-products. They have the ability to influence outcomes by promoting certain ideas and by setting and readjusting social norms. By framing messages in a certain way, individuals can be manipulated subconsciously. The way one thinks is tacitly directed, benefiting a pro–market, –capitalist and –business mind-set.

These powers are combined with professionally implemented stakeholder management. Everywhere a MNE is active, it requires a team of local experts to gather local knowledge and recruit local skills. Only this way can the necessary political and cultural sensitivity be assured. Stakeholder analysis and the identification of the local government’s key interests are thus eased. By knowing the state interest the MNEs economic interests can more readily be communicated as attractive.

However, despite of their significant power, MNEs also face a variety of challenges. Operating the way they do, MNEs have subverted what used to be conceived as business as usual. Unknown macro-economic risks arise and geopolitics generates the creation of a new economic dimension. Connected to economic and political novelties like trade wars, societies react to the conditions. Anti-capitalist and anti-globalisation protests grow and find more support for their protectionist agendas. Subgroups manifest that employ both right- and left-wing populist communication strategies or even draw on terrorism. Due to the uneven spread of the globalising trend, new threats like climate change, uncontrolled waves of migration and cyber criminality emerge. In the face of all these challenges MNEs naturally struggle to adapt to local conditions everywhere equally well.

Why did KAS support this event and what was the overall aim of the speakers meeting with Tim Hughes?

The aim of this event was to explore current and future developments in the interplay between politics and the economy. In a globalising world these two spheres slowly begin to merge and their borders grow increasingly indistinct. Due to the rise of economic giants like Amazon or Apple and the political power they assume, the reality of policy-making and regulation is changing.

The new dynamics sketched by Tim Hughes are thus very relevant for the future of politics. While it is at the core of the Konrad Adenauer Foundation’s mission to promote good governance, democracy and the rule of law new phenomena that have such far-reaching implications are naturally on the agenda. In a time when structures grow more complicated, it remains especially important to question roots and causes as well as possible outcomes and future scenarios.

KAS supports a questioning and discerning attitude and seeks to initiate new threads through its work. The Foundation regards fostering an open mindset as one of its responsibilities. Through its educational measures, KAS encourages audiences to take an active, responsible and knowledge-based part in the political shaping of their country. 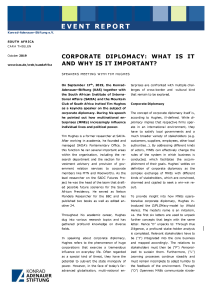