Struggles of the working class

“Struggles of the working class” was the theme of the third Discourse Café with Wendy Pekeur as the guest speaker, which took place on 15th May 2018 at the Stellenbosch University (SUN). The event formed part of the Discourse Café series, jointly hosted by the Frederik van Zyl Slabbert Institute (FVZSI) and the Konrad-Adenauer-Stiftung (KAS). The aim of the series is to promote a culture of informed debate on various topical issues.
May 18, 2018 Ordering Information

In her opening remarks Ms. Christina Teichmann (KAS) highlighted the importance of the agricultural sector for the South African economy; the agricultural sector accounts for 3% of the national GDP and provides directly or indirectly 8.5 Mio. people with employment and income. Due to this high relevance of the sector for the overall South African economy it is important to focus more attention on the living and working conditions of farm workers, especially female farm workers. Following the welcoming remarks the facilitator Monde Petje, SUN student and co-ordinator of the Discourse Café opened the floor to the guest speaker Wendy Pekeur.

Ms. Pekeur started her talk by giving some background information. She grew up on a state-owned farm in the Western Cape Province and her first job was on a fruit farm as a seasonal worker. There she experienced for the first time that seasonal workers could not join a trade union, a right that is enshrined in the South African Constitution in Article 23, only permanent workers were allowed to join a trade union. As a result the seasonal workers earned only 150 Rand per week. To change this inequity Ms. Pekeur founded a trade-union to lead the efforts for change.

In theory, South African workers can rely on a progressive legislation such as the Labour Relations Act, which aims to promote economic development, social justice, labour peace and democracy in the workplace; the Occupational Health and Safety Act and the Compensation for Occupational Injuries and Diseases Act (COIDA). However, seasonal farm workers and workers in the domestic sector often do not know their rights and have great difficulty to organize themselves in the form of unions. As a result these workers are very vulnerable to exploitation and often do not receive compensation after an injury which occurred during their work time.

Achievements of the trade unions

In 2013 strikes and uprisings of workers in the farm sector led to an 82% increase in their salary. This increase meant that the agricultural sector today is no longer the least paid sector. The least paid sector is now domestic work. As of 1st of March 2018 farm workers earn a minimal wage of 3,170 Rand per month. Notwithstanding, the al-ready implemented improvements, Pekeur pointed out that only 4-6% of the farm workers are organized in trade unions in comparison to 25.3% of the formal work force in South Africa. The mining sector is the sector with the highest percentage of workers belonging to a union. Ms. Pekeur criticized further that there are only 400 labour inspectors for all sectors in South Africa and that there are currently only 4 inspectors overseeing the entire Western Cape Province.

Ms. Pekeur also highlighted that there are also quite a number of progressive wine farms in and around Stellenbosch that make an effort to uplift the lives of their employees by giving them a stake in the farming business. She also mentioned some of the improvements that her trade union has successfully fought for, such as paid maternity leave for farm workers, day care for their children, toilets for female workers in the vineyards as well as other improvements concerning the safety and health of farm workers.

The power of consumers

As a last point Ms. Pekeur advocated for a sensitization of consumers since consumers have the power to promote fair trade practices by choosing the one over the other product. To better illustrate her point, she made the following example: If a bottle of South African wine is sold in Sweden for a sum equivalent to 100 Rand, less than 10% of the amount comes back to the wine farms. This small profit margin makes it very difficult for trade unions to negotiate minimal wages in the agricultural sector. Therefore consumers should exert pressure on retail companies to sell products for a fair price. Every consumer should become more aware and knowledgeable about the products that they consume, how they were produced and where the producers rank in the value chain. Consumers should also check the business practices of big retailers in their so called “Codes of ethics” and take this information into account when doing their purchases.

The Discourse Café ended with a question and answer session between Ms. Pekeur and the audience. 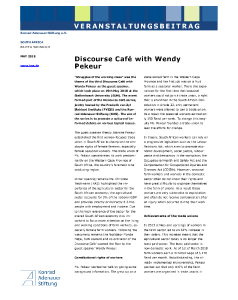