Release of the Afrobarometer Survey Results 2018 in Johannesburg

On the 13th of November 2018, the Institute for Justice and Reconciliation (IJR), the Afrobarometer Network and the Konrad Adenauer Foundation hosted the release of the Afrobarometer Survey Round 7 results of South Africans’ perceptions on land redistribution. At Crowne Plaza in Johannesburg, more than 50 participants representing the academia, media and civil society came together for this event.
November 29, 2018 Ordering Information 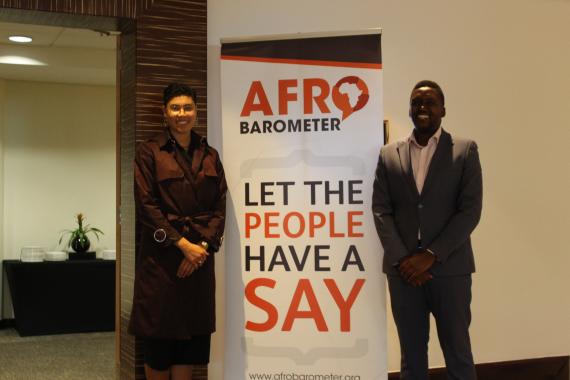 Afrobarometer staff welcoming the participants to the event 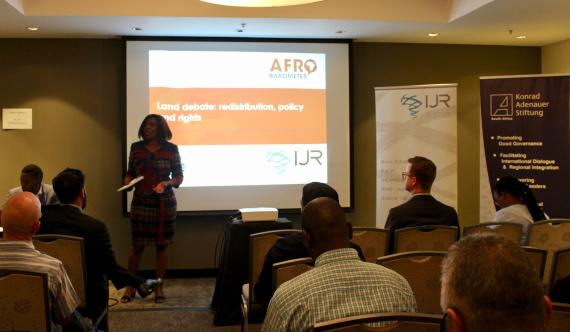 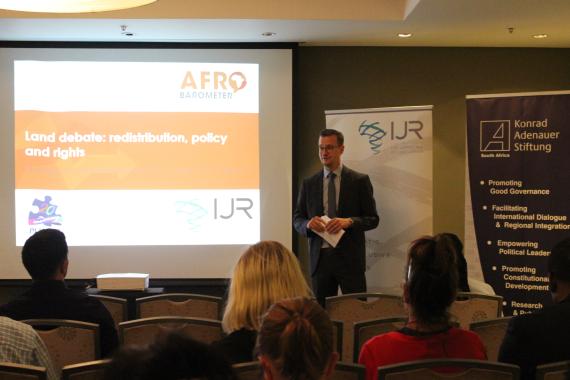 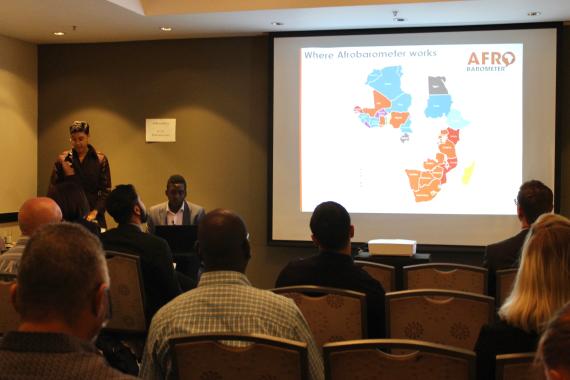 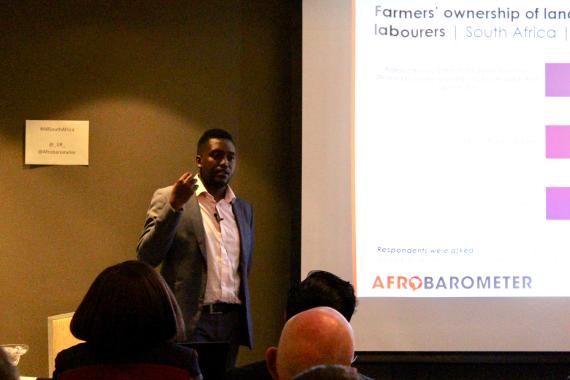 Sibusiso Nkomo (Afrobarometer) showing the results of the survey 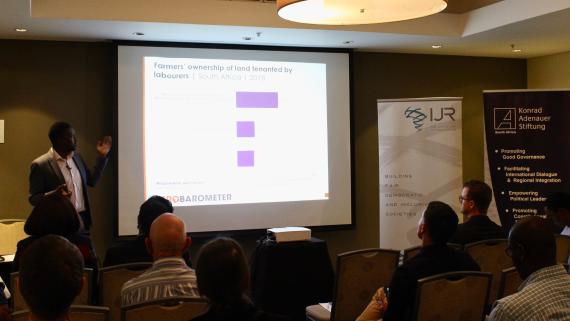 Much information about the public opinion on land redistribution being unpacked 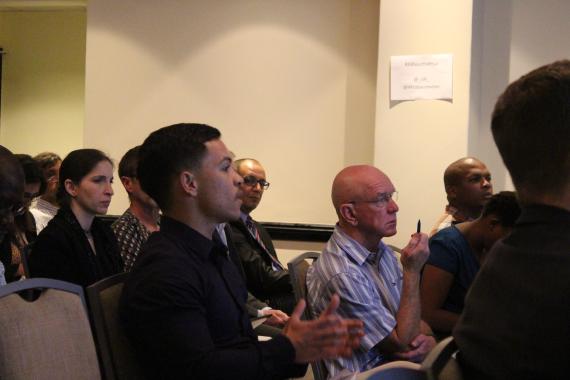 A participant posing his questions during the Q&A session

Anyway Chingwete (Senior Project Leader, Afrobarometer) welcomed the guests and opened up the event by giving a brief introduction of Afrobarometer. Afrobarometer is a pan-African, non-partisan research network that conducts public attitude surveys on democracy, governance, economic conditions, and related issues in African countries. Six rounds of surveys were conducted in up to 37 countries between 1999 and 2015, and Round 7 surveys wasere completed in 2018. Henning Suhr (Country Representative, KAS South Africa) followed the introduction with his welcoming remarks. He emphasized the importance of this survey ahead of the elections in 2019. The land issue has been on the agenda of many political parties and spoken of on behalf of the “people”. This survey would give the public a more realistic view of the perception of South Africans on land reform.

Dominique Dryding presented the methodology. Afrobarometer conducts face-to-face interviews in the language of the respondent’s choice with nationally representative samples. The Afrobarometer team in South Africa, led by Plus94 Research and the Institute for Justice and Reconciliation, interviewed 1,800 adult South Africans in August and September 2018. A sample of this size yields country-level results with a margin of error of +/-2.3 percentage points at a 95% confidence level. Previous surveys were conducted in South Africa in 2000, 2002, 2006, 2008, 2012, and 2015.

The results were presented by Sibusiso Nkomo (Project leader in the Research and Policy Programme, IJR) and focused particularly on four topics: land redistribution, land ownership, land acquisition and housing.

When Afrobarometer asked survey respondents which type of land the government should prioritize for redistribution, more than eight out of 10 (84%) state their priority; only one in 20 (5%) say that land should not be redistributed, while 10% say they “don’t know” or refuse to answer the question. The most frequently cited citizen priority for land redistribution, cited by 28% of respondents, is land taken away during the apartheid government’s forcible removals of black South Africans. The next-highest priorities for land redistribution, according to survey respondents, are agricultural land (21%) and urban vacant land (17%).

Until now, South Africa’s government has followed a “willing buyer-willing seller” policy to redistribute land from white owners to black beneficiaries. However, many landowners have avoided offering their land for sale for land-reform purposes and chosen to go to the open market instead. The survey shows that a majority (53%) of citizens want the government to maintain the “willing seller-willing buyer” policy, including paying the seller. Only one in four (26%) disagree, while one in five say they neither agree nor disagree or don’t know (Figure 3). Black African citizens are least likely to agree with keeping this policy (50%, vs. 62% of Coloured, 68% of Indian, and 73% of white respondents).

Farm laborers in South Africa tend to be tenants who do not own the land they live on or use. Labor tenancy goes back to the 1930s when farm owners started allowing people to live, raise livestock, and grow crops on their farms in exchange for their labor. Unexpectedly, Afrobarometer data show that a majority (55%) of citizens “agree” or “strongly agree” that the government should allow farmers to retain ownership of land on which their laborers live. About one-fourth (23%) disagree, while about the same proportion say they neither agree nor disagree or “don’t know”.

Acquisition and control of land

When asked what they consider the greatest challenge for people wishing to buy land in South Africa, citizens’ most frequent response is that land is too expensive (29%), followed by the scarcity (17%) of land and its “racialization,” or lingering effects of past racial policies that hindered land acquisition by non-White citizens (16%). One in 10 (10%) mention difficulties in getting title documents.

White and Coloured citizens, the employed, the highly educated, and the wealthy – in short, those most likely to be able to buy land – are more likely to cite high price as a challenge than are Black citizens, the unemployed, the less educated, and the poor. Land prices are of particular concern in the Western Cape (44%), Gauteng (36%), and Limpopo (36%), as well as among younger respondents (31%-35% among those aged 18-35).

When it comes to who should be able to own land, most South Africans believe in gender equality: Three-fourths (76%) of respondents “agree” or “strongly agree” that women should have the same rights as men to own and inherit land.

While land issues have sparked heated public debate, it appears that South Africans are far more concerned about housing than land. When asked to rank the most important problems facing the country that government should address, housing ranks as the third priority, cited by 24% of respondents as one of the three problems they consider most important, after unemployment and crime/security. The issue of “land” in general, on the other hand, ranks at No. 13, cited by just 7%. While relatively small, this proportion is more than three times its score in previous surveys.

After the presentation of the key findings, the floor was opened for questions and comments. In general, the data release event was successfully managed to provide much helpful information about South Africans’ perception on the land question that has a predictive meaning for political analysis as well as for civil opinions. 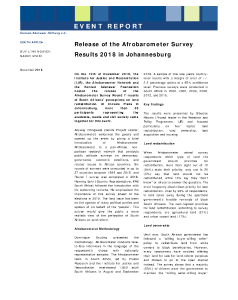