Freedom of Expression versus Hate Speech: Are we Striking a Balance in South Africa? - Foundation Office South Africa

Freedom of Expression versus Hate Speech: Are we Striking a Balance in South Africa?

On 17 October 2019, the Centre for Unity and Diversity (CUD) and the Konrad-Adenauer-Stiftung (KAS) hosted the third event of the Roundtable Discussion series. At the core of the presentations and the subsequent discussion was the question of where to draw the line be-tween freedom of speech and hate speech. The recent findings of the Courts and the South African Human Rights Commission (SAHRC) on hate speech rooted the event in current affairs. To dig into the topic of hate speech more thoroughly, legal, psychological and political aspects were addressed.
October 29, 2019 Ordering Information

Ms Christine Botha
The opening speaker was Ms. Christine Botha who is the manager of the Centre for Constitutional Rights (CFCR). In her function as a jurist she provided the legal perspective on hate speech. Freedom of expression is a basic right enacted in the foundation of every democratic constitution that fosters transparency and accountability. Her speech laid bare the discrepancy between international law, the Constitution and the Equality Act, which is the South Africa anti-discrimination law.
The Equality Act prohibits unfair discrimination, propaganda and the advocacy of hatred based on e.g. gender, religion, ethnicity, race, sexual orientation and disability. However, clear definitions of hate speech cannot easily be derived. Courts do not assist in solving this problem since they also apply different standards. Botha repeatedly emphasized that the Act must be aligned not only with the Constitution, which already defines standards for hate speech, but with international standards as well. Currently the state lacks consistent and coherent legislation and measures to effectively fight hate speech while, at the same time, protecting freedom of speech and expression. Without a strong legal foundation, so Botha, powerful prevention, prosecution and penalisation are problematic. She recommends an appropriate realignment of the Equality Act to respond adequately to the challenges of our time.

Prof Juan Nel
The second speaker was Prof Juan Nel. As a psychologist, he referred to the implications hate speech has for the individual. He researches at the University of South Africa and is the former president of the Psychological Society of South Africa (PsySSA) and, at this event, also represented the PsySSA Hate Crimes Working Group Steering Committee. Hate Speech and other hate incidents have been confirmed to have an especially traumatic effect on the mental health of victims, but also negatively influence communities and society. During his talk he unpacked the relationship between law and psychology, emphasising a need for their interaction. Regulation alone, so Nel, is inadequate to address hate crimes but can help to raise awareness and provide training services.
Prof Nel then discussed a study that he participated in (“The Hate & Bias Crimes Monitoring Form Project”, see at: http://hcwg.org.za/resources), which did not investigate incident rates across the country but, he believes, shows statistics indicative of the countrywide situation. In his sample, most hate crimes are based on nationality (45%), followed by sexual orientation (17%) and religion (14%). In most cases this kind of hatred manifested in robbery or theft (30%) and in damage of property (27%). In over 75% of cases the perpetrators are known by the victim or in some way affiliated.

The effects of hate speech are manifold. On the individual level they are cumulative, enduring and encompass emotional, mental and physical health and the economic situation. Families and communities are potentially debilitated and untied. Prof Nel stresses that, at the same time, they can also be sources of hatred. On the societal scale, an increase of hate speech and crime leads to a loss of social trust, spread of anger, fear and frustration as well as to a prevailing feeling of lacking security. By implication, sensitization must happen an all levels.

Prof Nel emphasized that hate crimes are identity crimes that, in their dismissal of labelled groups, stem from the innermost part of the offenders’ personality. Interventions thus have to be proactive and community leadership groups must focus on collaborating with one another as well as tackling the social sphere. Awareness for the severity of hate must be raised while opportunities for conversation and recourse among victims has to be facilitated. Above all, institutionalized prejudice should be interrupted while structural support for potentially vulnerable communities must be increased.
Ms Sara Gon

The third speaker was Ms Sara Gon. With a background in law, she is now a policy fellow at the Institute for Race Relations (IRR), a think tank promoting political and economic freedom. She agreed with Prof Nel that legal restriction of hate speech is problematic. Going beyond Prof Nel she took the position that hate speech, just like any form of speech, should not to be legally restricted, especially given the potential abuse of such legislation in the current South African political climate. Legislation, so Gon, only creates winners and losers rather than changing minds. Speech itself must never be illegal while its content might well be contested. Instead of trying to legally restrict speech and opinion she stressed the responsibility of leaders, who have an increasingly pivotal role in the shaping of attitude and behaviour. Political environments essentially determine the level of tolerance in a society. Thus, political and social leaders must be aware of their power with regard to hate speech. Hence, Gon adds a normative pressure to the ideal of a good leader. Not just leaders, society in general should regulate itself via stigmatisation and social costs. However, she relativizes that this also depends on the character of the respective media coverage.

What was the aim of this event and why has KAS supported it?

In the age of social media, hate speech is spread more easily than ever before. The internet provides anonymity and lowers barriers to send hate messages. This safe space for haters is also the basis for further radicalization and the committing of hate crimes. In a globalizing world, counter-movements increasingly react with populism and extremist groups are polarizing across borders. With these growing poles, hate grows. Governments to date have not addressed this growing hate properly, either through strong leadership or through consequent legislation. Psychological and social implications can be dramatic.

As sociocultural environments essentially coin personal identities, from which hate speech and crime originate, governments and courts cannot be solely accountable. Sensitization must happen on all levels by providing information and education. The Konrad Adenauer Foundation regards it as one of its responsibilities to contribute to educational solutions. Examining roots and causes of those phenomena, which pose a threat to the ideals of democracy and human rights is an integral part of the Foundation’s portfolio. 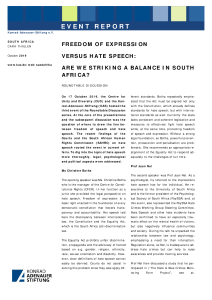