by Nancy Msibi
South African Institute for Advanced Constitutional, Public, Human Rights and International Law (SAIFAC) a partner of Konrad Adenauer Stiftung (KAS) has started a new initiative in 2019 which is funded by KAS named SAIFAC Africa Forum. This will be a se-ries of four events which will draw on the experience of South Africa and connect it with developments in a par-ticular country or group of countries.
April 18, 2019 Ordering Information

South African Institute for Advanced Constitutional, Public, Human Rights and International Law (SAIFAC) a partner of Konrad Adenauer Stiftung (KAS) has started a new initiative in 2019 which is funded by KAS named SAIFAC Africa Forum. This will be a series of four events which will draw on the experience of South Africa and connect it with developments in a particular country or group of countries. It will attempt to draw on both legal and non-legal experts to provide critical analysis of their societies and an understanding of how to move them forward. The goal is to stimulate greater public engagement on these questions as well as critical thinking on how to address challenges relating to democracy, the rule of law and constitutionalism in Africa.

On 19 February, the first seminar was held at Constitution Hill with the title"Does South Africa Welcome African Refugees?" The seminar was attended by over 60 delegates. In his opening remarks the Director of SAIFAC, Prof David Bilchitz said the South African asylum and refugee system is under pressure: in recent years, South Africa has become one of the top ten refugee-receiving countries; mostly from elsewhere in Africa. Quite unusually in the global south it conducts individual refugee status determination, resulting in more than 90% refusals. The system itself is slow, and inefficient. Worsening levels of xenophobic violence and other forms of intolerance towards foreign nationals has further aggravated the already desperate plight of these people. The 2017 White Paper on International Migration promises a system that is efficient, secure and respectful of human rights. Yet, at the same time, the White Paper proposes removing the right to work, conduct business and to study for asylum seekers.

Dr Fatima Khan lamented that there is a difference between the law and the daily experiences of migrants. In terms of legislation, refugees ought to live well in South Africa but the reality is different. There is perpetual marginalization of refugees. There seems to be a general narrative of labelling foreigners as economic migrants for instance in Musina 10 000 refugees applied for asylum but all applications were rejected. Some of the applicants were from Somalia and Democratic Republic of Congo.

Faith Munyati mentioned that the law dictates that asylum seekers must get an asylum seekers permit. With this permit they can live freely in South Africa pending a decision on the application for their refugee or asylum status. However, some asylum seekers are not provided with the permit at the Refugee Reception Offices. This has a negative impact on their life in South Africa as well as access to basic services like health.

Discussions were moderated by Cristiano D’orsi from the University of Johannesburg. The delegates were actively engaged with comments and questions for the panelists. The comments varied from foreign nationals who gave positive feedback about life in South Africa and others who were negative about the treatment they get at government offices as well as from the law enforcement agencies. 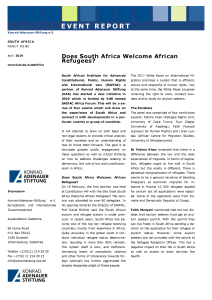