The Importance of Active Citizenship

The event organised by Konrad-Adenauer-Stiftung (KAS) in partnership with the School of Public Leadership (SPL) at Stellenbosch University and the Centre for Constitutional Rights (CFCR) brought together grade eleven and twelve learners from six different Western Cape High Schools to discuss young people’s concerns and political views. The aim of the discussion was to raise awareness for the need to become active citizens, social entrepreneurs and generally become more involved in the community.
August 12, 2016 Ordering Information

The audience was inspired by the fascinating stories of guest speakers Ms Chaeli Mycroft, a disability rights activist, and Ms Jessica Dewhurst, a strong advocate of Human Rights and Social Justice.

In the face of the upcoming local government elections in August, the speakers were eager to highlight the right to vote, as some of the present students were allowed to vote for the first time in their lives. One member of the audience described the dilemma of evaluating a party based on its achievements in the past versus evaluating it on its current performance. This inner conflict, she argued, is not only plaguing her parents’ generation, but also hers. Ms Dewhurst replied that the rich and painful history of South Africa must indeed not be forgotten. However, she believes, it is crucial to question the concept of loyalty in the context of elections. Moreover, she emphasised that one’s voice is insofar important, as one speaks up for the alienated, the poor, and the frustrated whose voices have been taken away. Therefore, the excuse that “nothing will change anyway” is invalid, because the youth in particular is significantly affected by politicians’ decisions. Ms Mycroft agreed and contended that students forfeit any right to complain if they abstain from voting. She further urged the youth to not simply accept information provided by social media, but to critically assess them instead, since assumptions spread via social media were often false and unreliable. Her colleague continued to share her thoughts on leadership; it should not be seen as a position of power but as a privilege to serve and lead by example. Another student stressed the importance of education and events like the Youth Dialogue that help young people form an opinion. He maintained that people were easily persuaded by small, short-term benefits such as tokens from politicians. Yet, they should rather make long-term decisions based on the country as a whole. Only if people came to realise that the prosperity of society is more important than that of individuals, the young man claimed, progress would occur. A fellow student complained that people often ignore that the right to vote had to be fought for. She reminded the audience that there are still countries where free and fair elections are not a matter of course.

"All you need is love"

Another central topic was, simply put, love. General consensus was that charity made it impossible to treat another person unfairly. Ms Dewhurst criticised that “we are so obsessed with finding differences that we are missing what we have in common.” She praised the importance of human rights, and asked the students to promote social justice, be it through campaigns or volunteerism. Only if the students exposed themselves to others, they would be able to comprehend their concerns and show more empathy. In this context, Ms Mycroft asserted that disabled people still live in a state of Apartheid, as they were not properly included in society, and countless establishments were, despite recent improvements, not accessible for handicapped people. Ms Rebecca Sibanda of the CFCR argued that the Constitution of South Africa was based on empathy, love, and respect for each other. She recommended the audience to actually read the Bill of Rights, since it “speaks to humanity.” Following this tenor, Ms Mycroft suggested that South Africa had enough of segregation and negativity, and should learn from the past to make history in the present. According to her, a new culture of love and acceptance is needed to overcome societal tensions.

The Youth Breakfast was a clear success and received very positive feedback from the learners. KAS project manager Christina Teichmann called attention to the fact that 30 per cent of the South African population are under the age of 15. If the young are politically active and make their voices heard, political elites will respond to their preferences. It is crucial to support this future generation and to make sure that it is equipped to make a valuable contribution to society. Events like this help young people understand the great merits of democracy in South Africa. Overall, the participants were confident that the future of this country looks bright. 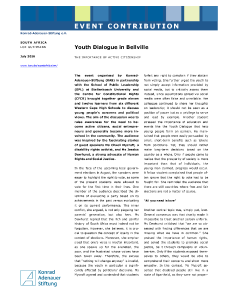