by Nancy Msibi
On April 17th 2019 the Konrad Adenauer Stiftung in cooperation with SAIIA (South African Institute for International Affairs) and CAMM (Center for African Management and Markets) hosted a panel discussion on “Digital Democracy vs Digital Dictatorship”, discussing the use of social media and the balance between positive aspects like the ability to foster transparency between citizens and the government but also propaganda and misuse connected to social media in recent years.
April 29, 2019 Ordering Information

On April 17th 2019 the Konrad Adenauer Stiftung in cooperation with SAIIA (South African Institute for International Affairs) and CAMM (Center for African Management and Markets) hosted a panel discussion on “Digital Democracy vs Digital Dictatorship”, discussing the use of social media and the balance between positive aspects like the ability to foster transparency between citizens and the government but also propaganda and misuse connected to social media in recent years.
With the ability to connect with audiences with a simple click, both citizens and politicians have found new methods for their messages to travel far and wide. Consequently, the hyper-connected nature of the digital world has made it easier to influence electorates with new and unconventional methods. The use of social media and networks has changed the nature of political communication and engagement – both globally and in Africa. In the context of a global crisis of democracy, this has resulted in a shift in the way voters are influenced and how political leaders are elected. Whereas technological platforms were initially seen as a force for greater accountability in the likes of Egypt, where the right to tweet became synonymous to the right to rebel and enabled citizens to hold underperforming and autocratic governments to account, they have since taken on a more sinister dimension in many countries.

Arab Spring and Social Media
Ronak Gopaldas, director at Signal Risk and a Fellow at the Center for African Manage-ment and Markets (CAMM) presented a summary of his paper “Digital Dictatorship vs Digital Democracy in Africa (via Skype). He described the Arab Spring as a game changer on how social media and politics intersect and how they can be empowerment for the citizens and bringing voters closer to their government. In 2010 social media was widely seen as a positive tool to enhance freedom of speech and democratic movements. Today in 2019, looking at Trump in the US, Brexit in Europe and the Facebook-Cambridge AnalyticaScandal, one needs to reevaluate the role of social media on Democracy and Freedom of Speech.
What are the implications for the African Continent? Gopaldas said that “African Dictators used to be afraid of Social Media, now they learned how to use it”! The biggest source of influence one can get is by information, so power means controlling information. Looking at frequent internet shutdowns and social media blackouts in several African countries and also worldwide the freedom of speech is no longer given to everyone on Social Media. Whilst there remain positive elements to social media, including the ability to foster the accountability and transparency between citizens and their governments, there is now a risk of negative factors surpassing these benefits.

Social Media and Dictatorships
At this point, he strongly emphasized the differences between Hard and Soft Dictatorships in regard to Social Media. In Hard Dictatorships governments exercise control over their citizens by denying access to data, whereas in Soft Dictatorships the Data would be used to manipulate, monitor and to create misinformation. He said that in Africa this tends to be rather reactive than active, in contrasts to measurements taken by countries like China. He focused on three African examples: first, the DRC, where as a result of controversial elections, internet shutdowns were frequently used in order to strip the power away from people andtransfer it to the government. Second the case study of Zimbabwe, where violent demonstrations against the political leaders also led to several internet shutdowns, which effectively results in cutting off resistance at the source. Third the social media tax in Uganda, leading to a drop in internet and mobile money users. Gopaldas summed up that those tactics are aimed at neutralizing political resistance and to monitor them at the same time. Additional to the danger those events pose to democracy he also considers it a huge economic risk, as payment via the internet gets more and more popular. These effects go beyond politics and also beyond the economy as it also has psychological effects and impact on the security of the citizens.

The latest Afrobarometer Studies
Ms. Gugu Nonjinge is a Communications Coordinator for Southern Africa at Afrobarometer and offered insight on how Afrobarometer works and what they do. She was proud to announce that Afrobarometer will cele-brate their 20-years-anniversary in 2020. She then continued bysaying that across Africa 68% of the population agree on democracy as the best form of government and 78% reject presidential dictatorship. Talking about the accessibility of Social Media and the internet in general she pointed out that 91% of all participants had access to a mobile phone but also 36% said that they never use the internet.

Social Media and Elections
The Panel discussion covered many topics, one of them being the upcoming South Afri-can Elections and the Role of Social Media - seeing Social Media rising to the top of the agendas for the first time. It was stated that information is first posted on Social Media and then shared in traditional ways and publication channels like online newspapers and print publications. In regard to the upcoming elections, the discussion focused on misinformation, especially regarding the discussion about land in South Africa.
Murray Legg, an entrepreneur and an expert on the digital sector was talking about the future of Social Media and Politics in South Africa, pointing out, that one of the biggest problems of Social Media is, that it is so intriguing, so powerful as a political platform but also a place with a huge level on anonymity and unaccountability which leads to people behaving in a way they would not seem fit in the non-digital world. Legg said, that in order to understand what is happening now one needs to go back to the Industrial Revolution, where suddenly the printing press increased the possibilities to spread knowledge and information. Today Social Media is taking this opportunity one step further with the ability: “to make the unpublished published”. Furthermore, he said, that this development is great in terms of accessibility but no one was taught the responsibility of publishing: People were given this huge responsibility and tool with-out guidelines on how to use it. Society needs to learn how powerful the possibilities of publishing are and how to use this power.

Panel Discussion
Ferial Haffajee is a South African editor and journalist, she has published a best-selling book called “What if there were no whites in South Africa”, during the discussion she emphasized the dilemma of a world that is more and more intertwined via the internet but at the same time, those who are isolated and don't have access to the internet growing more and more isolated in this world.
Nzinga Qunta presenter of business news at SABC News moderated the discussion and debated how the future of Social Media could look like: A few years ago Myspace was huge, now it is not really relevant any-more, what is going to happen to Twitter, Facebook and Instagram in the Future? “We went too far, too fast – We’ve created monsters”.
One person in the audience said: “There is so much information, that there is no information” –which led to a discussion on the low participation of younger people in politics and elections, who might feel frustrated by the lack of trustworthy information. The term “Post-Truth” was mentioned and was regarded as problematic because it is implying that there was a time, where there actually was truth. Participants were discussing a model where free access to Wikipedia is given and that Social Media in a way re-wards worst opinions much more than well thought out commentary or balanced discussions, which may be part of the human nature.

Closing remarks Henning Suhr
In his closing remarks, Henning Suhr (KAS) said that Social Media is shaping the ways how we access, share and circulate information, which has an influence on politics worldwide. He briefly mentioned the new EU Law on Data Protection and that opposition movements all over Africa rely on Social Media as a platform. He mentioned George Orwell and what he might have thought about Social Media in this Century. Also, Suhr mentioned the Media Programme of the Konrad-Adenauer-Stiftung in Sub-Saharan Africa, also based in Johannesburg and their work in supporting free and independent media.

The Technological Honeymoon is over
Summing up Yarik Turianski (SAIIA) said, that the “technological honeymoon is over” and focused on the importance of the interconnection of the physical and digital space. Still, people are braver on Social Media and also cowardness is encouraged on SM, because people don't feel like they can be held accountable for their actions, which is an extraordinary dilemma. Looking at Social Media in 2019 one can see both sides: Digital Democracy in Estonia vs. Face Recognition Technique in China. Also, 20% of the online comments are made by 1% of the users, so one needs to be careful when evaluating how real the online world really is. 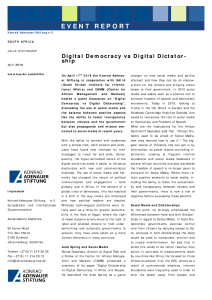