In the context of the "White Rose Art Project," the Cape Town Holocaust Centre in partnership with the Konrad-Adenauer-Stiftung (KAS) invited high school learners, parents, and teachers on 18 August to take part in the opening of the exhibition that showcased the students’ artworks. Through exposure to the history of the Holocaust and Nazi Germany, the project encouraged students from grade nine to twelve from schools all over the Western Cape to share their thoughts in form of poems or paintings regarding injustice in society.
August 13, 2016 Ordering Information 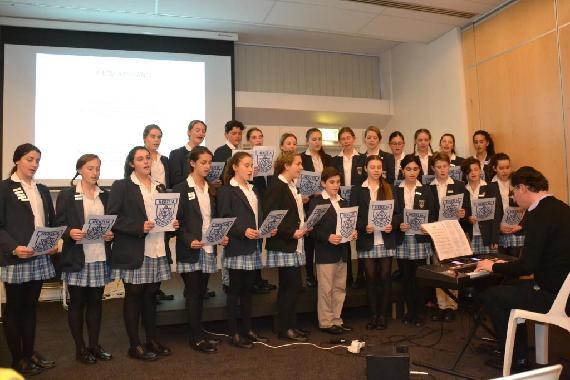 The Herzlia choir with Ivor Joffe 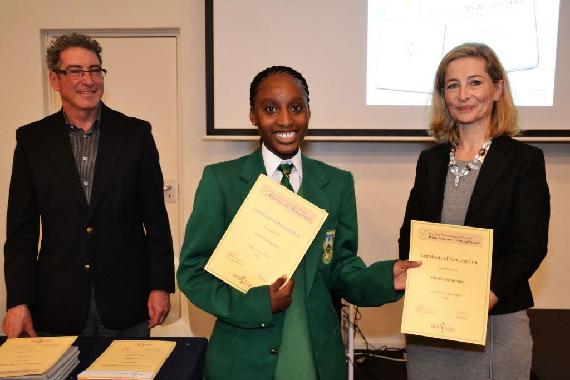 Yohali Hatungimana from the Stirling High School in East London came down from East London with her family to attend the awards evening. 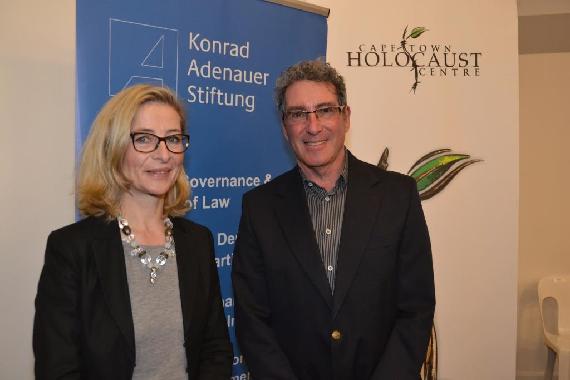 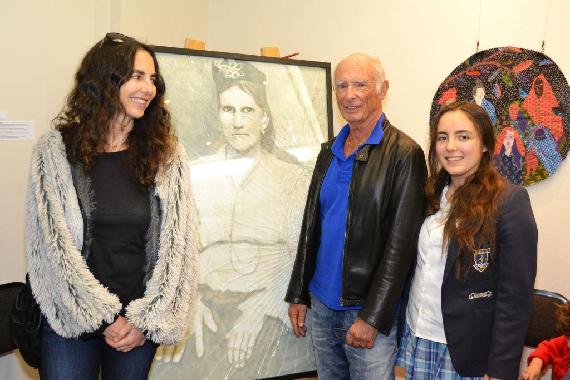 Mika Chesno from the Herzlia High School won the competition.

This awards evening not only created awareness of the importance of art in fighting exclusion, but also showed the extraordinary talent of the participants, who despite their young age understood that every discriminatory action stems from an irrational creation of a category of "the other."

KAS as a foundation has always been determined to promote democratic values and to strongly condemn racism, xenophobia, and discrimination. Therefore, it goes without saying that KAS was delighted to support a project highlighting the power of imagination in tackling inequity. Host Richard Freedman maintained that creativity, indeed, unlocks something "that cannot be expressed by words." He further argued that the jury received excellent submissions and struggled to announce winners, because every entry was of high quality. Moreover, Freedman claimed that art will never be liked by everyone; it does, however, always provoke a response. He praised the participating teachers, the "unsung heroes," who motivated their students to engage in an important topic that is still highly relevant today. Given that creativity can take many forms, he introduced a high school choir showing that the power of music is one that touches us all. Afterwards, the announcement of the winners filled the room with happiness and made for many proud students, parents, and teachers.

At the end of the ceremony, the Holocaust Centre showed an intense short film about Petr Ginz, a young Jewish teenager who was deported to the Terezín concentration camp in 1942, but still, against all odds, published the magazine “Vedem” in the camp, which was full of poems, paintings, and other original work. The movie revealed how people in chains still manage to use art as a form of resistance. Petr died at the age of 16 on 28 September 1944 when he was transferred to Auschwitz. The Holocaust Centre was eager to emphasise that his legacy will live throughout centuries. After all, his story should be a reminder of how great challenges can produce remarkable responses, which often are best expressed through art.

Relevance of the Holocaust

It was striking to see how the theme of the exhibition is still of major significance in today’s society. The students called attention to other examples of injustice such as homelessness, rape culture, racism, xenophobia, and misogyny. Projects like the "White Rose Art Project" crucially contribute toward making the youth aware of social ills and their implications. The horrific events of the Holocaust reminded the learners that exclusion has no place in our society and must by all means be prevented. 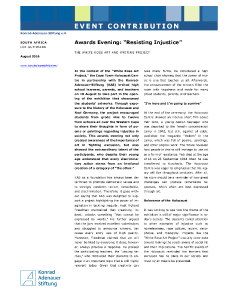