A Futures Scenario Discussion by KAS and SAIIA

On 27th July 2018, the Konrad-Adenauer-Stiftung (KAS) in co-operation with the South African Institute for International Affairs (SAIIA) hosted a workshop on the topic “The Impact of the Electric Vehicle on the Southern African Development Community”.
August 3, 2018 Ordering Information

The event took place at the Townhouse Hotel in Cape Town and attracted experts from very diverse backgrounds, ranging from economists and consultants over scholars and government officials to experts in the specific field of Electric Vehicles (EVs). Being an event launched in the context of the Regional Observatory, an initiative by KAS and SAIIA to anticipate key emerging disruptors in the Southern African Development Community (SADC), the purpose of the event was to explore the impact of the Electric Vehicle uptake on the SADC region.

At the beginning of the event, Henning Suhr, KAS Resident Representative for South Africa, addressed some opening remarks to the participants, introducing the Foundation’s mandate to promote democracy, good governance and socio-economic development in South Africa. Moreover, he highlighted the importance of the event for KAS given the Foundation’s eagerness to explore future trends in the country, especially before the background of the topic’s complexity and its wide-reaching implications.

Subsequently, Talitha Bertelsmann-Scott, Head of the Regional Observatory at SAIIA, welcomed the participants and gave some further insights into the aims and objectives of the expert roundtable. Ms. Bertelsmann-Scott introduced the workshop as the first event on the way towards developing a comprehensive report including certain future scenarios and respective policy recommendations for the South African government and SADC on the topic of the Electric Vehicle with a follow-up event to be held in September 2018.

The workshop was facilitated by Tanja Hichert, an experienced strategic Futurist, who guided the experts through discussing the “knowns” on the topic and through developing future scenarios addressing the related key uncertainties – the “unknowns”. In order to sketch the current scene of the Electric Vehicle, the participants were divided in four thematic groups, namely 1. the history of the topic, 2. the driving forces of the process, 3. the challenges ahead and 4. the key stakeholders affected by the uptake of the Elec-tric Vehicle.

In the course of these discussions, it became clear that a future rollout of the Electric Vehicle in the SADC region – as well as the effects of its current global uptake – can either hold many benefits for the region or it may leave the region lacking behind. In particular, the experts agreed that the Electric Vehicle can create new and beneficial markets within SADC, affecting the manufacturing and services working force. However, at the same time they also identified the need for extensive retraining and reskilling of the workforce to prevent the loss of jobs. Moreover, in case the region does not manage to catch up to global trends, the experts expressed their concern that the SADC countries might become a “dumping ground” for old technologies and vehicles.

In order to explore these potential developments in more depth, the experts then engaged in some detailed scenario planning, using double uncertainty matrixes for describing the plausible circumstances of certain future scenarios. The main variables identified in the earlier conversations included the question on whether the governments of the SADC members will adopt a proactive or a reactive stance towards the Electric Vehicle. Secondly, the uncertainty regarding the presence or absence of a complimentary technology was assessed by some experts. Moreover, two roundtables approached the inclusiveness or exclusiveness of the transition process, meaning whether the Electric Vehicle will be accessible for the whole society or only limited parts, in the context of the government stance and the state of the technology.

During this forward-looking part of the workshop, the diversity of the participants resulted in enriching conversations with many different perspectives and eventually leading to multidimensional and productive results. Thus, the variety of experts constituted a very suitable representation of the topic at stake, given its implications crossing sectors and including political, economic, environmental, sociological and ethical considerations.

The Road Ahead for SADC and South Africa

Following the extensive brainstorming and analytical sessions, Tanja Hichert closed the workshop by gathering the main conclusions of the day agreed upon by the experts. A crucial aspect in that regard was the expressed need for the governments to set a clear time frame and a concrete agenda, bearing in mind that with technology changing quickly, also the policies need to be adapted accordingly. In addition, the experts considered it essential that governments adopt a skills transition program to minimize job losses as well as constituting the path towards the Electric Vehicle in an inclusive and equitable way.

According to the experts, the benefits of the transition towards the Electric Vehicle in the SADC region will thus depend on the willingness and behavioral change of the players involved. Following from these insightful recommendations and the rich and lively discussions during the entire workshop, all participants as well as the hosts from SAIIA and KAS showed their content with the progress made, setting a fruitful base for further conversations in September 2018. 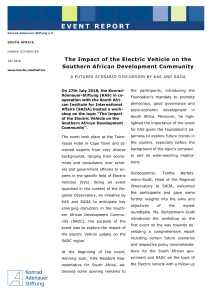