The Loss of Civility in Discourse

On 14 November 2018, the Centre for Unity in Diversity (CUD) and the Konrad-Adenauer-Stiftung (KAS) jointly hosted the fourth and last roundtable discussion of this year's series at the Protea Fire and Ice Hotel in Cape Town. The discussion focused on the topic ‘The Loss of Civility in Discourse’ with Professor Mills Soko, former Director of the UCT Graduate School of Business, as the guest speaker.
November 21, 2018 Ordering Information 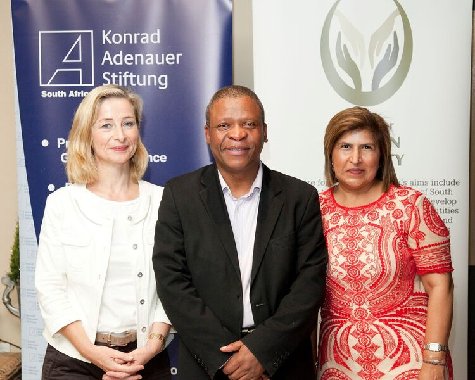 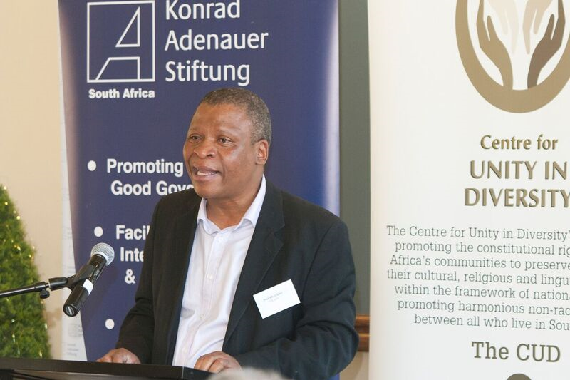 Prof. Mills Soko during his speech about „The Loss of Civility in Discourse“ 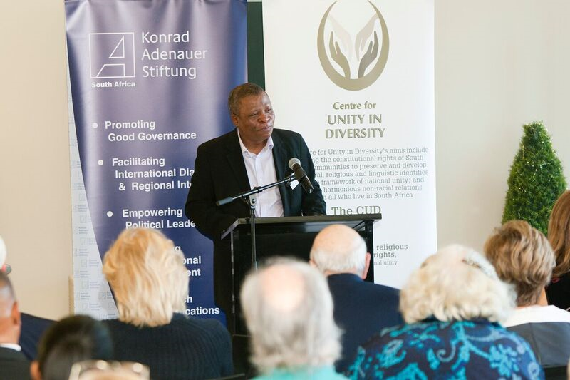 According to Soko, the emergence of the Internet plays a crucial role in reinforcing uncivilized debates and facilitating the spread of “Fake News” and media bias as it provides a large mouthpiece for everyone. 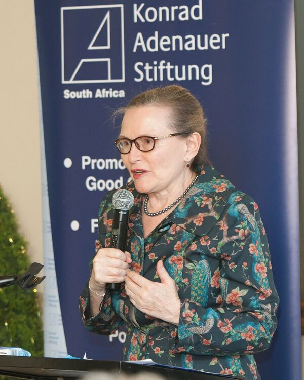 Helen Zille, Premier of the Western Cape Province, also picked up on the profound impact of the Internet on people, especially the new generation, through applications, Social Media and other channels.

Christina Teichmann welcomes the participants on behalf of the Foundation

Zohra Dawood, Director of the CUD, opened the event by pointing out that the loss of civility in discourse is a matter of great concern in South Africa and that civility and respect should not be seen as old-fashioned notions but that they lie at the heart of humanity and the commitment of South Africans to their constitutional democracy.

Afterwards, Christina Teichmann, KAS Project Manager, welcomed to the audience on behalf of the Foundation and explained why KAS as a German political Foundation supports these kinds of events by shortly reflecting on the meaning of civility. In her point of view, civility is not only about showing good manners or being friendly and polite, but also relates to how citizens should behave in public life, including showing respect for others. As the mandate of KAS is to promote Good Governance, Democracy and the Rule of Law active Citizenship plays a vital role since it forms part of a healthy democracy.

Decline in Civilized Debates around the Globe

In the following, Prof. Mills Soko shared some thoughts on this important topic. In his opinion, the quality of discourse in South Africa has declined dramatically. However, he also pointed to the fact that this widespread challenge also exists in many other parts of the world – whether under Trump in the United States or in Hungary. Instead of a respectful and civilized exchange of opinion within a discourse, interactions often are one-sided, full of self-selling messages or self-serving misinformation. What is even more worrying is that public discourse is frequently shaped by insults. The prevalent debating culture in Parliament, where MPs constantly interrupt each other’s speeches, hackle and insult each other is, according to Soko, one shattering example for the decline in civilized public debate.

Taking this development into consideration, the question of what causes the loss of civility arises. According to Soko, there have always been uncivilized discourses. However, television, radio and the Internet have fundamentally changed the circumstances. Particularly, the emergence of the Internet plays a crucial role in reinforcing uncivilized debates and facilitating the spread of “Fake News” and media bias as it provides a large mouthpiece for everyone. In this regard, Soko made mention of unseemly discourse on Social Media and stated that these platforms have become a forum where insults are the norm and threats are not uncommon. In his opinion, the preferences for shouting down divergent views rather than the sober consideration of issues can be partly explained by the fact that people are more likely to fight from home where they can hide behind a monitor than in real face to face discussions.

Civility as an Expression of Respect for Laws, Rules and Norms

In the following, Soko turned to the question of why a good discourse is important and emphasized that civility can be seen as an expression of a fundamental understanding and respect for laws, rules and norms that guides citizens in terms of what is acceptable and unacceptable behavior. These norms and rules are crucial as civilization would end up in anarchy by constantly disregarding them.

At the end of his speech, Soko emphasized that in order to tackle rising incivility, people would need to recognize that it is becoming a serious problem and that our civilization is going in the wrong direction. However, at the same time he stressed that the freedom of speech is one of the fundamental rights in a democracy and that uncivil discourses might be the price people have to pay for it.

Nexus between Civility and Freedom of Speech

Helen Zille, Premier of the Western Cape Province, also shared some of her thoughts on the topic and picked up on the complex interface between civility and freedom of speech. Premier Zille considers the freedom of expression as a fundamental right of an open society. However, it should also be acknowledged that this right often implies an uncivil discourse in some kind of way, as even without intention anything that somebody says, might offend somebody else. Therefore, according to Zille, the nexus between civility and freedom of speech, or more precisely between civility and the freedom to speak the truth, displays an irresolvable dilemma within this discussion.

The Internet as a platform for uncivil behaviour

Zille also related to the profound impact of the Internet on people, especially the new generation, through applications, Social Media and other channels. On the one hand, it is fascinating and opens up great opportunities that millions of people can be easily reached through the Internet but at the same time, these platforms not only provide and spread reliable information but also extensive disinformation. Hereby, she pointed to the massive interference in the U.S. Elections through hundreds of fake accounts that sought to change people’s opinions and voting preferences. According to Zille, this was not just about individuals being uncivil but a deliberate manipulated attempt to hijack the public debate. This extent of boosting and amplifying uncivil discourse through technology, so Zille in her conclusion, reaches a completely new dimension that needs to be understood and taken seriously.

Afterwards, the audience had the opportunity to ask questions, which ended in a fruitful and vivid discussion. 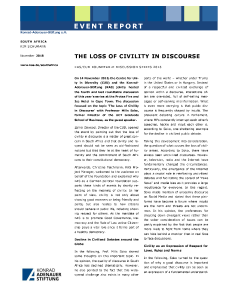