The Coexistence of Traditional and Local Governance Structures in a Democratic Dispensation: Challenges and Successes

On the 13th and 14th of September, the Konrad Adenauer Foundation in cooperation with the North-West University (NWU) hosted a conference on the topic ‘Traditional Leadership and Authority versus Local Government’ in Potchefstroom. The overall objective of the conference is to explore and engage in a practical fashion with the interactions between traditional leadership and a modern democracy based on constitutional values such as human dignity, equality and freedom. The conference was attended by 64 participants representing the academia, local government as well as traditional leadership.
September 20, 2018 Ordering Information Participants and organizers of the conference. 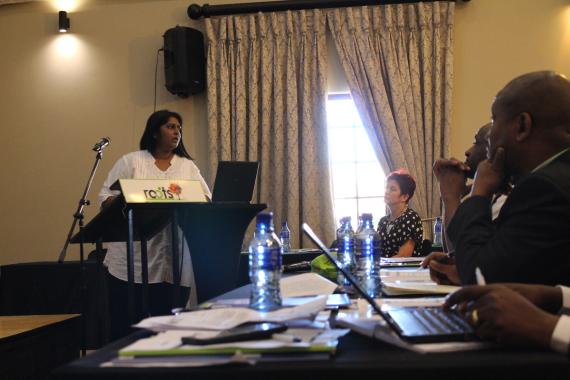 Mageshnee Iyer (City of uMhlathuze Municipality, KZN) with the speech on 'Shortcomings of the national building regulations in traditional areas'. 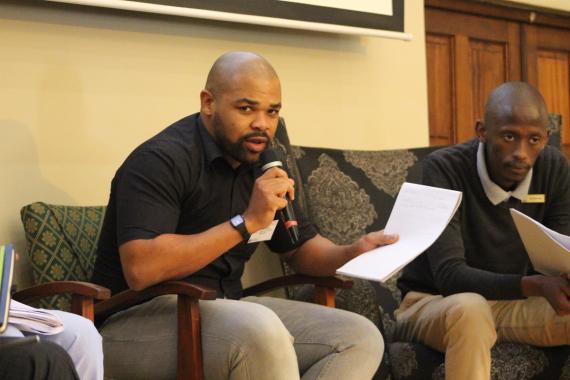 From left: Zotha Zondo and Mfundo Dube (City of uMhlathuze Municipality, KZN) on 'Incremental planning towards effective land use management in informal and rural areas'. 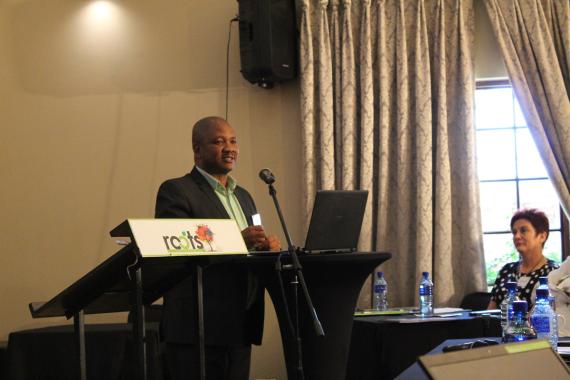 Inkosi Sipho Etwell Mahlangu (National House of Traditional Leaders) brings to the conference his speech on 'Areas of collaboration between local government and traditional authorities'. 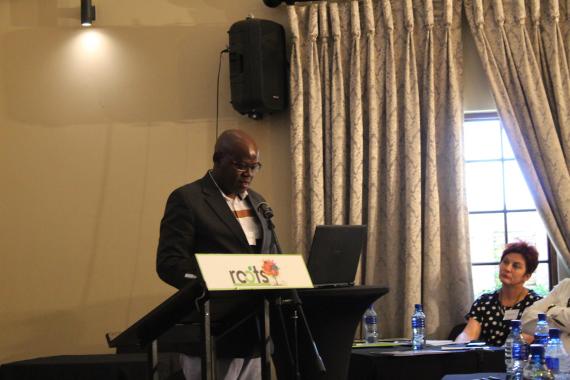 Rsimati Sam Khandlhela (National House of Traditional Leaders) with his presentation 'Traditional leadership in a democratic South Africa - a millstone around the neck of the ruling party or an integral part of governance in an African country? - A critical Analysis'. Jacob Rankedi Ngakane (Director and Lead Developer, Ndebele Kingdom) during his speech on 'Land Reform Requirements for Land Justice and Ethics for South Africa based on the Collective Wisdom and Strengths of South Africans. 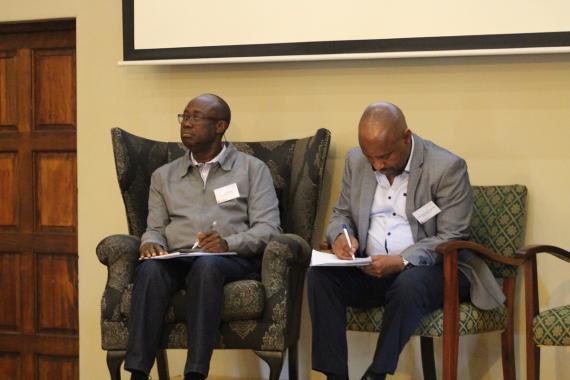 Kolapo Omidire (LLD Candidate, NWU) (left) with his speech on 'Exploring a case for a definitive role for traditional leadership in upholding human rights in hydraulic fracturing'. Part of the audience.

The long-run partnership between the North-West University and the Konrad Adenauer Foundation dates back to 1997, emphasized Professor Christa Rautenbach (Faculty of Law, NWU) during her welcoming remarks. Once again, with the support of the KAS, a successful event was made possible. According to Henning Suhr (Country Representative, Konrad Adenauer Foundation South Africa), it is also of great importance for the KAS to promote such events with the effort to consolidate democracy, good governance and the rule of law in South Africa. Under the circumstances of the specific historic and demographic context, traditional leadership in South Africa has always been an important part of the society and, yet, dealing with many challenges in cooperation with local government. Hence, this conference offered a forum for dialogue and discussion between the two parties for better collaboration and governance, a point mentioned by Professor Stephen de la Harpe (Executive Dean, Faculty of Law – NWU).


The conference consisted of three sessions with three main themes in two days: Local and Traditional Governance Issues, Traditional Authorities and Mining Issues (day 1) and Traditional Authorities and Land Issues (day 2). A problem in the legal system highlighted by Adv Kagiso Maphalle (PhD Candidate under the Chair of Customary Law, Indigenous Values and Human Rights, UCT) was the incomprehensive recognition of traditional leadership in the Constitution. Chapter 7 of the Constitution is devoted to clarifying the role of traditional leadership but fails to outline the functions thereof at the local sphere of government. During the conference other case studies also showed an ongoing tension between the two parallel systems on local level. In many cases, traditional communities are not included in planning and local politics. Traditional leaders, who are categorized as Public Officials, do not enjoy the same rights and benefits as their counterparts in local governments. These are some of the gaps in the legislative system which were pointed out by Inkosi Sipho Etwell Mahlangu and Rsimati Sam Khandlhela from the National House of Traditional Leaders. Local officials from the city of uMhlathuze brought to the conference insights in the challenges they had that resulted from the inadequate ruling power of municipal policy in traditional areas. It is worth mentioning that traditional communities, on occasions, challenge and undermine the power of local regulations, however, could play a crucial role in protecting cultural values and living environments in mining areas, according to Professor Willemien du Plessis (Faculty of Law, NWU) and Kolapo Omidire (LLD Candidate, NWU).


Alongside with outlining shortcomings, speakers at the conference also made suggestions for the gray zone in the current legal framework. Municipalities need to be more rural-focused and cultural-based with their policy making process and more proactive with their approach to traditional areas. A good cooperation between local government and traditional leadership is only possible when the role of traditional leadership in the development of the country is constitutionally clarified and not limited to advisory functionalities as it is currently.


The land issue, which came up in many questions from the audience as well as speakers’ presentations on the first day, was to be discussed more on the second day of the conference.


Overall, the event was able to facilitate in-depth understanding of the topic and fruitful debates between speakers and participants.