South Africa is currently under rising pressure from the economic, social and political sphere. Social movements, made up especially of young South Africans that are spilling from social media platforms into the streets demand affordable education and hold their political leaders to account. At the same time the Rand remains at a low of R15 to the US Dollar – a good point to evaluate how far South Africa has come in the past two decades and what direction it may take in the near future.
February 5, 2016 Ordering Information

South Africa is currently under rising pressure from the economic, social and political sphere. Social movements, made up especially of young South Africans that are spilling from social media platforms into the streets demand affordable education and hold their political leaders to account. At the same time the Rand remains at a low of R15 to the US Dollar – a good point to evaluate how far South Africa has come in the past two decades and what direction it may take in the near future. On this occasion the Ubuntu Foundation and the Konrad-Adenauer-Foundation invited former president FW de Klerk to draw on his experience twenty-six years after he lifted the ban of the African National Congress (ANC) and initiated a democratic transition.

At the Ubuntu Business Networking Lunch the former president reminded the ca. 200 participants that despite all the negative headlines, one should not forget where the country has come from and what achievements have been made in the last two decades. Some of these successful achievements include reducing the number of people living in absolute poverty, providing housing and sanitation, protecting minority and individual rights, as well as enabling religious freedom. A recent report published by Stats South Africa in 2014 shows that since 2006 the total amount of people living in poverty has gradually dropped from 57.2 % to 45.5%. In 2011 the ANC government has delivered 5.6 million formal houses and between 2005 and 2008 South Africa’s economy grew by 5%. De Klerk argues that these positive developments and achievements should not be forgotten in the current debate. South Africa, in contrast to other post-colonial states, has been successful in establishing a vibrant democracy, in which the economy grows and people of different colour and race live in peace and protected by the rule of law. Central forces aiding this development were the very core values enshrined in the South African Constitution of 1996, often hailed by the international community as one of the most modern and progressive constitutions worldwide.

These pillars of democracy include the freedom of education, the freedom of speech, and especially the criminalisation of discrimination against individuals based on their ethnicity, religion, gender or any other differences.

However, de Klerk highlighted the need to protect these pillars of democracy by upholding the constitution. He warned that current developments show that some of these very core principles are under threat. This includes for instance the rise of racial discrimination based on negative stereotypes. Particularly daily interactions on social media are filled with hate speech and indicate the challenges to the principle of freedom of speech in South Africa. Drawing on his experience during the transition period 1990 – 1994, FW de Klerk emphasised the importance of the values of constructive dialogue. A new culture of public discourse that is based on facts rather than emotions is needed in order to find a way out of the current crisis and pave the way for a strong democratic South Africa where all people feel accepted, safe and part of. This is particularly important as South Africa’s communities are living in symbiosis and must therefore consider one another when drafting future goals. In order to preserve meaningful dialogue de Klerk’s premise is that extremists from all sides must be excluded. Instead, modest leaders of all communities need to be supported and included into the debate as issues of this kind that are left unaddressed could have severe negative consequences when words of discontentment follow actions. An example of unaddressed discrimination in the public sphere in the recent past were the xenophobic attacks across South Africa.

However, dialogue alone is not enough to overcome the current crisis. The former president urged South Africans not to be bystanders but actively shape the future of their country. . The very first step, so the former president include to repair the dysfunction education system that leaves the majority of South Africa’s youth no opportunity for future employment. This does not only include tertiary education but also traineeships. A rising economy like South Africa requires not only academics and small entrepreneurs but also skilled workers to build a strong middle class. Although the ruling government has focused on social welfare grants to assist impoverished families (with 44% of all South Africans receiving grands in one or another way) this will not be a sustainable solution to reduce unemployment rates in the long run. Instead, a functioning education system can produce well-educated workers that carry the economy. On the other hand South Africa needs to attract foreign investors, who currently lack confidence to invest in South Africa. In order to achieve this goal political leaders and decision makers need to promote a climate of political, economic and social stability. 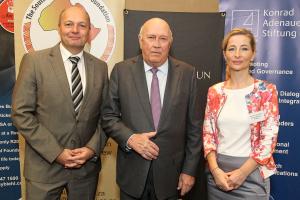