In South Sudan, KAS Scholarship Alumni Are Sowing Seeds of Peace and Stability

by Donnas Ojok
On 21st August 2013, Mawa George from Yei River State in South Sudan got a phone call from an administrator at KAS that would forever change his life. The phone call was relaying to him the great news that he had been selected as one of the four students from South Sudan to benefit from a scholarship programme by the Konrad-Adenauer-Stfitung at the Uganda Martyrs University. The greatness of the news laid in the fact that without the scholarship, George was not sure if he would even enroll for the programme, although he had been admitted to the university. To George, a university degree was a ticket to better life for himself; a gateway to the success of a small community organization he had founded and an inspiration to thousands of young people in his community.
March 4, 2019 Ordering Information 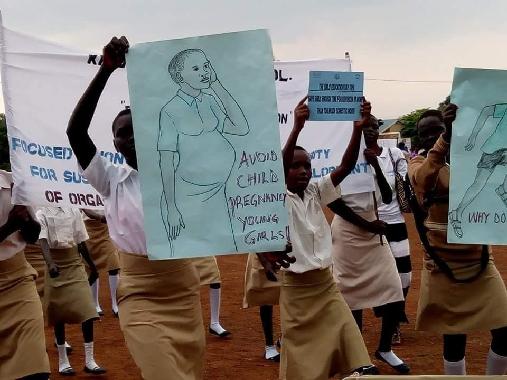 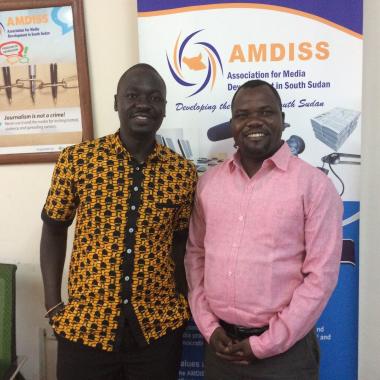 Earlier on in 2010 before South Sudan even became an independent country, George together with his colleagues started Community Empowerment for Rehabilitation and Development (CEFoRD). He had just finished his secondary education and he was a teenager disgusted with the plethora of social and economic challenges that riddled his people. ‘’At that time, everyone was clamoring for the independence of our country. I was worried about the development pillars that our independence would be hinged on…. I had to do something about it’’ George recollects.

The struggle for independence in Southern Sudan from the Khartoum establishment in the North meant that the young George together with a generation of other children in his small town of Yei had to seek refuge in other neighboring countries. George spent his childhood between refugee camps in Uganda and DRC. When they returned home, the social, political and economic fibers of the society had been weakened to the core. CEFoRD emerged as one organization with the core mission to rebuild and rehabilitate communities. Without any financial support, these group of enthusiastic teenagers traversed primary and secondary schools in the Yei River State region to sensitize children about the scourge of the HIV&AIDS pandemic which was a public health threat then using Music, Dance and Drama mediums. They also organized peacebuilding campaigns to promote unity and reconciliation among and between communities. Before long, CEFoRD was identified by a donor agency to be an implementing partner for a civic-education programme. That opened doors for other projects.

But there was one major challenge. The technical complexities of programme management and resource mobilization meant that the leader of the organization required an advanced education. That’s what motivated George to enroll for the Bachelor of Arts in Democracy and Development Studies at Uganda Martyrs University (UMU). The course enabled him to developed his human resource management, proposal development and project management skills – all of which laid a formidable foundation for building one of the leading local NGOs in South Sudan that is CEFoRD. Today, CEFoRD provides direct employment opportunities to 30 youthful South Sudanese in addition to implementing various projects cutting across areas of livelihood, emergency and humanitarian response, civic engagement and peacebuilding in many parts of the country.

To George, the scholarship was also a significant social and communal feat. When he completed the course in 2018, he became the first graduate in his village. ‘’Thanks to the gift of a quality education supported by KAS, I am now a role model to everyone in my community’’ George remarked with a delightful voice.

George is just one of the dozens of a network of KAS scholarship holders and alumni in South Sudan.

Justoson Victor Yuasa, a current scholarship holder in BA in Local Governance and Human Rights, one of the programmes we sponsor at UMU is also a budding civic leader and community mobilizer. His organization, Peoples Empowerment Centre runs agricultural development and local governance improvement projects in sub-counties across Yei River State. Currently, Peoples Empowerment Center is collaborating with CITIVM to sensitize the rural communities about the peace agreement signed by the warring parties in Sept 2018.

Michael Duku, another alumnus of the scholarship programme is the Executive Director of the Association of Media Development in South Sudan (AMDISS). Formed in 2003, AMDISS is a platform that brings all the media editors and owners of the leading media outlets in South Sudan to help address the news and information void in the country. The organization also builds the capacity of journalists to continuously be the authentic sources of information that will contribute towards building a more informed and progressive citizenry in South Sudan. One of the most compelling projects that AMDISS runs is the Media Development Institute (MDI), a training facility at their complex located in the heart of Juba City that trains aspiring and emerging young journalists in South Sudan. The center is the only training facility for professional journalism in South Sudan. Since its foundation in 2017, MDI has trained and awarded media certification awards to over 80 journalists who are all now practicing professional journalistic work with key media outlets allover South Sudan.

There is also a resource center at AMDISS where journalists in Juba gather to share ideas, do research and social networking. AMDISS also engages in media advocacy by organizing public dialogues and workshops targeting key media stakeholders in South Sudan with the objective of promoting a favorable environment for free and professional media to thrive.

The work AMDISS is doing in South Sudan is needed now more than ever before. As Duku reflects, ‘’While I am reminded every day of the huddles we need to encounter to fulfil the information gaps which is one of the issues that fuels conflict in our country, I also feel grateful that through AMDISS we are playing our role in media development and I am thankful to KAS for opening doors for me to receive a world class education that is a key asset for the success of our work ‘’.

Dara Felix, another MA in Democracy and Development Studies also works as a Programme Manager at the Centre for Development and Democracy in South Sudan (CEDED). CEDED organizes civic engagement trainings on various aspects meant to improve local governance such as promoting transparency and accountability, educating citizens about their rights as espoused in the constitution, among others. in an addition, CEDED also hosts a library and community resource center to promote literacy and access to information.

Another alumnus, Moro John has been working with UNHCR to verify data of Sudanese refugees and PoCs in South Sudan.

Now in its 15th year, the Uganda and South Sudan Office of the Konrad Adenauer Stifung has been partnering with Uganda Martyrs University to advance critical scholarship in areas of development studies, human rights, local governance to talented but needy students in the two countries. Since the programme is long-distance-studies in nature, students have the opportunities to study without interrupting their professional and work schedules. In 2017, a new course, an MA in Public Policy was also introduced and it has quickly emerged as one of the most coveted and the best training on public policy in Uganda. Altogether, about 300 Ugandan and South Sudanese professionals have benefited from the scheme and the alumni network is still growing.