Strengthening Relations between Refugees and Host Communities in Uganda

It's a Friday afternoon in the dry month of March in Northern Uganda. Under the scorching heat of the sun, 300 South Sudanese refugees from Palabek Refugee Settlement site and their host community members gathered at Palabek Ogili Trading Centre to deliberate and critically reflect about both the challenges and opportunities embedded in the dynamic and the evolving nature of their relationships.
August 1, 2019 Ordering Information

It's a Friday afternoon in the dry month of March in Northern Uganda. Under the scorching heat of the sun, 300 South Sudanese refugees from Palabek Refugee Settlement site and their host community members gathered at Palabek Ogili Trading Centre to deliberate and critically reflect about both the challenges and opportunities embedded in the dynamic and the evolving nature of their relationships.

The host communities and refugees dialogue was made possible through Kabake Community Radio programme, a flagship initiative by 102 Mega FM and the Konrad-Adenauer-Stiftung. Already in its 15th year, Kabake, a weekly community dialogue initiative aired all Sundays from 10-11AM brings community members in the various corners of Acholi Sub-Region, Northern Uganda to voice-up their concerns and constructively participate in public debates and discussions which is meant to strengthen and consolidate their participation in civic and governance processes.

In 2018, a town-hall edition was introduced to provide a platform for direct interface between the local leaders and the ordinary citizens. It is upon this background that refugees, host communities and various leaders from both local government and NGOs gathered to discuss the key aspects pertaining to how the relations between refugees and their hosts at Palabek Ogili refugee settlement site could be bettered. Key leaders who participated in the dialogue included the L.C 5 Chairperson who is the political head of Lamwo District Local Government, L.C 3 Chairperson of Palabek Ogili Sub-County, Residential District Commissioner (RDC) of Lamwo District and representatives from the Refugee Law Project.

According to the 2006 Refugee Act and 2010 Refugee Regulations, refugees are allowed and encouraged to integrate with host communities. Most importantly, children of refugees can go to the same schools with Ugandan children. They can also go to the same hospitals, fetch water from the same boreholes and most of all own farmlands to cultivate food which they can eat and sell to earn income. Refugees in Uganda have freedom of movement and are free to pursue livelihood opportunities, including access to the labor market and to establish businesses. In order to sustain and expand this progressive and generous out-of-camp refugee approach, Uganda seeks to strengthen the resilience and self-reliance of refugees and their host communities[1].

ReHoPE is a transformative strategic framework aimed at bringing together a wide range of stakeholders in a harmonized and cohesive manner to more effectively promote the resilience and self-reliance of the entire population of the refugee hosting areas – both refugees and Ugandan nationals[2]. ReHoPE supports the Government of Uganda’s integration of refugees into the National Development Plan II (NDPII, 2015/16–2019/20), through the Settlement Transformation Agenda (STA), thereby making refugees part and parcel of the development agenda of Uganda[3]. ReHoPE is a key component in the application of the Comprehensive Refugee Response Framework (CRRF).

As stated in the ReHOPE Framework (2017), ReHOPE aims is to coordinate a transition from humanitarian to development support in Uganda’s refugee-impacted districts. Its first goal is to foster sustainable livelihoods for refugees and host communities, thereby contributing to socioeconomic growth and increased individual income. It seeks to promote a transition within the refugee hosting districts from separate service delivery for refugees and hosts, which is the current situation, to integration of refugees into a strengthened district and service delivery system serving both refugees and hosts[4].

The Framework also notes that ReHoPE is an area-based approach that helps to align and support the district development plans and district planning processes in the refugee-hosting districts. Phase I of the ReHoPE strategy, 2017-20, is devoted to preparing joint programmes and action plans, beginning implementation, drawing lessons and making adjustments. Phase II, 2021-25, involves rolling out the programmes developed and tested in Phase 1, with a particular focus on district level planning and implementation. Phase III, 2026-30, involves consolidation of the programme and a focus on national service delivery systems[5].

Insights from a World Bank Stock-Take Report of the ReHOPE Programme highlight important data. For instance, the report noted that between 2014 and 2018, the government of Uganda directly allocated $302.7 Million to 11 districts hosting refugees. These allocations are in the form of direct grants to Local Governments (refer to table below for the breakdown of district level financial allocations).

Arua and Yumbe districts are the largest recipients of government financial allocation to support refugees and host communities. This is because they are also the largest refugee-hosting districts in Uganda. For instance, by March 2019, Yumbe and Arua districts were hosting 224,750 and 160,040 refugees respectively[6]. Bidi-Bidi resettlement site which is Africa’s largest refugee camp is located in Yumbe district. All the refugees in Yumbe are from South Sudan.

The largest portion of Government allocations goes to education and health sector. As show in this graph below, the education sector was allocated UGX 123bn, 126bn and 128bn in the FYs15-16, 16-17 and 17-18 respectively.

When Palabek Refugee Settlement site was opened in April 2017, it became Uganda’s newest refugee settlement. The site was set-up to following the rapid influxes of refugees from South Sudan. Until Sept 2018 when the various warring factions signed a peace deal to end a five year civil conflict that engulfed the country shortly after independence, up to 1.8 Million South Sudanese were seeking refuge in neighboring countries with Uganda alone hosting 1.5 Million. The exodus of South Sudanese refugees became the world’s worst refugee crisis. Uganda became Africa’s largest refugee hosting countries and only third globally. Palabek Refugee settlement which sits on a 50 square kilometer land hosts approximately 40,000 South Sudanese refugees. With the Lamwo district population of approximately 140.000 people, refugees’ make-up about 28% of the demographic composition of the district.

Uganda has one of the world’s most progressive refugee management approaches that has won international admiration and is fast being regarded as a blueprint. In 2016, Uganda’s approach informed the design of the New York Declaration on Refugees and Migration and in 2018, it contributed towards the refinement of the Global Compact on Refugees which reaffirms the political will of world leaders to save lives, protect rights and share responsibility on a global scale.

UN Secretary General António Guterres sees Uganda’s refugee policy as “a symbol of integrity of the refuge protection regime”, which he observes, is unfortunately not replicated in many places around the world. Uganda’s borders have remained open to refugees from all backgrounds. During the first ever International Refugee Solidarity Summit held in Kampala in 2017, Mr. Guterres praised that he had “seen the borders, doors and hearts of Ugandan people open to support refugees”.

The Costs of hosting refugees could taint relations with host communities

Uganda’s friendly refugee policy comes with attendant costs to the government and local communities. A recent study by United Nations Development Programme (UNDP) finds that the Ugandan government and local communities together spend 323 million dollars annually on refugee protection and management. The estimations take into account land, provision of social services (education, health, energy, and water), ecosystem loss and tax exemptions to United Nations agencies. Most of the land provided for refugee settlements does not belong to the government but to local communities who donate it for the purpose. This explains why refugee settlements are concentrated in areas with communal land ownership systems.

The increase in refugee numbers is putting much pressure on the country’s resources and social services. The unprecedented influx from South Sudan coupled with food shortages; drought and high unemployment means that hospitality is waning, especially in some areas where refugees now outnumber the indigenous populations.

The presence of South Sudanese refugees in Palabek Ogili Sub County in Lamwo district is imposing excessive pressure on overstretched state and host community resources, according to local leaders. This has sometimes resulted into conflict between the refugees and the host communities who feel burdens of hosting refugees on their land.

There is also issue of involvement of refugees in crimes like theft, resource-based conflicts, and competition for employment with nationals among others. Among the notable causes of conflicts between refugees and host population is the competition for land.

Furthermore, refugees have an impact on the environment in the host areas. Refugees depend on the environment for firewood, construction poles, cultivation and fishing in lakes, rivers and swamps. This leads to the abuse of the environment especially where refugee numbers outnumber the available resources. One of the impacts of refugees in settlements is the cutting down of trees for fuel and making makeshift houses. This has resulted into environmental degradation.

In her opening remarks, Innocent Aloyo, the host of the Kabake Community Radio programme expressed gratitude to the government for a progressive refugee policy that welcomes refugees and make endeavours to ensure that their rights are guaranteed. She also thanked the host communities for being receptive and supportive to the refugees in Palabek resettlement site emphasising that “our gesture of goodwill is a re-affirmation that we are active citizens who supports government programmes”.

The keynote address was given by Geoffrey Howard Okot, the Field Officer working with the Refugee Law Project in Lamwo district. In his address, Okot noted that despite the positive efforts to integrate refugees in host communities, the relationship between the host communities and refugees is has hit all time low. This is attributed to poor communication between government officials and the local communities which did not clarify on certain fundamentals like how the locals would benefit. As such, “many host community member feel like their expectations are not being met” he noted.

Highlights from Okot’s keynote address were also corroborated by community members who attended the dialogue. “The presence of refugees here has caused a lot of problem. Before refugees were allowed to settle on land offered by the local communities, there were five key issues agreed upon. Among them was to provide employment opportunity to the community who gave land and secondly, health facilities that will benefit both the locals and the refugees were to be constructed in the area. However none of these promises were fulfilled despite the agreements being put in writing”, lamented Omal a host community member.

Another community member, Lalam alleged that refugees are favored than the host communities in regard to access to social services. For instance, “whenever we visit the health facility, we don’t get the much-needed medical help. It’s the refugees who access treatment,” she decried. She also added that “refugee children study for free while children within the community are asked to pay”.

Meanwhile, John Ogwok Komakech, the Lamwo district LC V Chairperson who also attended the Kabake Community radio program said the issues raised by the community have not been brought to his attention. However, he promised to follow it up with the local council leaders before he can forward it to the Office of the Prime Minister (OPM) who is directly responsible for the welfare of the refuges in the country. Ogwok also urged the refugees to respect the laws of Uganda and urged them to desist from violent conduct.

The Lamwo Resident District Commissioner (RDC), James Nabinson who also doubles as the chairman district security committee promised to meet the refugee leaders and iron out the issues raised by the communities. “I will investigate the key issues raised and find solutions to it,” says Kidega.

In her closing remarks, Ms Irene Atek Jovia, the Station Manager Mega FM challenged the leaders to address the concerns raised by the communities. “These matters the communities have raised should be treated as something urgent and should be resolved,” said Ms Atek. 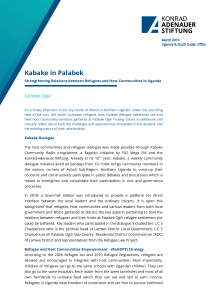