A national dialogue organised by the Konrad-Adenauer-Stiftung has brought together major political and civil society actors and academics to discuss party coalitions and power sharing, focussing on recent developments and the 2011 elections.
September 15, 2010

The Konrad-Adenauer Stiftung organised the national dialogue on party coalitions to provide a platform for forward-looking discussions among political actors as plans and strategies are drawn for 2011.

The following central questions were addressed:

1. How far is the current coalition between the opposition parties under the Inter-party Coalition (IPC) a timely and viable strategic step for those who aspire to deliver democratic political change in 2011?

2. How strategically effective is the decision by some opposition political parties not to join the IPC and still aspire for a victory in 2011?

3. Can a coalition between the NRM and any other party be considered a likely scenario? What would be the implications of such a scenario for multi-party politics in Uganda?

4. To what extent are concerns that Uganda might end in a power sharing deal similar to that of Zimbabwe or Kenya legitimate?

Specific issues which dominated the debate included the different strategies of the IPC and the Uganda People's Congress (UPC) in campaigning for electoral reform and the political parties' lack of consolidated organisational structures at the grassroots level. Several contributors called for a broad-based 'national convention' cutting across politicians, religious organisations, civil society, pressure groups and ordinary citizens alike, to address fundamental issues of governance in Uganda and create a critical mass. 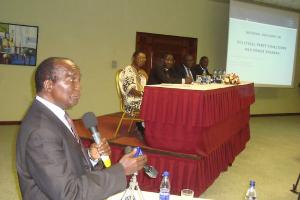