Despite closeness to their constituencies which should ensure better service delivery and accountability, local government units in Uganda face a gigantic communication roadblock which makes the concept of citizen-state engagement in the country an illusory catchphrase. This gap presents a unique opportunity to use social media to advance better local governance and better service delivery.
February 28, 2017 Ordering Information 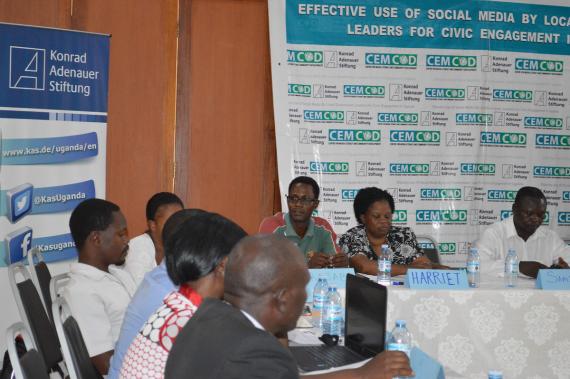 In recognition of the need to increase good governance and government accountability by closing the gap between information demand and supply, opening new channels of communication between citizens and their governments and enhance existing channels of communication, Konrad Adenauer Stiftung and its partner, the Centre for Media Literacy and Community Development (CEMCOD) launched a revolutionary project in 2016 to reach out to local government officials across the country. Dubbed “Promoting Good governance, Accountability and Civic engagement at the local government level through Media”, the project takes the form of trainings of local government officials in the effective use of social media, to improve good governance, transparency and accountability in the management of public affairs, citizen engagement and delivery of social services.

Picking up from a series of dialogues held in three regions (Busoga, Ankole and West Nile) the first workshop in 2017 was taken to Elgon region in Eastern Uganda where local government officials from five districts (Mbale, Budduda, Manafwa, Budaka and Sironko).

Maureen Agena, a social media consultant and lead facilitator of the training started by giving participants the general concepts behind web 2.0. Crucially significant was the fact the Web 2.0 has ushered in a new communication pattern which puts the user at the center-stage. She used the analogy of the two hands to demonstrate the significance and role of social media in communication. The right hand represents five tools each represented by a finger, namely: Blogs, collaborative working, tagging, feeds, and mash-ups. The other left hand represents the human components of social media, namely: people centered, access, participatory, self-content generation and the potential socio-economic change that social media promotes.

The rest of the two-day workshop focused on practical training sessions on using Twitter, LinkedIn, Google Plus, Facebook, Blogging and Skype.

The workshop was summed up with a public dialogue that brought together stakeholders from the local government units, civil society and the media fraternity who expressed their gratitude to KAS and CEMCOD for taking lead in supporting the districts information department which remains highly dysfunctional because of the meagre resources it receives. This predicament was well encapsulated by Rajab Namakhola, the Mbale District Agricultural Engineer who said it was the first time in his 15years experience as a local government worker to receive training on communication. “I will from now henceforth use social media as a tool to share information and opportunities on agriculture with the farmers and youth in my district” he committed.

Similarly, the Deputy CAO of Budduda DLG D also committed that 'the web.20 training I have got will be on top of my agenda with the district technical committee when I go back'.

Speaking as a panelist, Mr. Abubakar Mpoza, a senior lecturer of communication at the Islamic University stressed that the 'the potential benefits of social media like convenience, interconnectivity has proven that it is the best communication tool for enhancing citizen-state engagement”. He however also hinted on the challenges of innovation noting that the likely ills of social media like propagating fake news should be dealt away with. Mr. Mpoza also advised the leaders of various local government departments to share important information like job adverts, health alerts among others on social media to incentivize citizens to constructively use them.

On the need to go beyond the surface to acquire credible news, Maureen Agena, who was also part of the panelists maintained that ‘whilst SM promotes citizen journalism, a lot of relevant information is left out & this call for professional journalism to bridge the gap’

One of the key highlights of the workshop and the debate was the need for a radical paradigm shift by local government officials in uganda who been traditionally lagged behind in the technological advancement. Kevin Namutosi, the District Information Officer of Budduda District thus insisted that 'We need an attitudinal change as local government workers to realize the full potential of Social Media'. This was further reechoed by the Town Clerk of Mbale District who unequivocally stated that there is no way local government can run away from social media.

If there is any take-away, the social media workshop and public debate on Social Media for improved local governments has promised that despite the negativity associated with this new communication tool, the focus of governments, civil society organization and individual officers at local governments should be directed towards tapping into the enormous opportunities that it presents for effective communication and engagement for transparency and good governance at the local level. 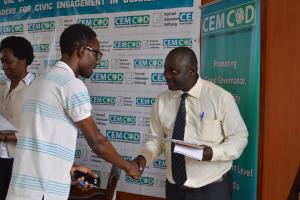 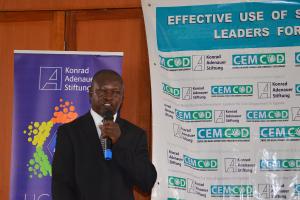 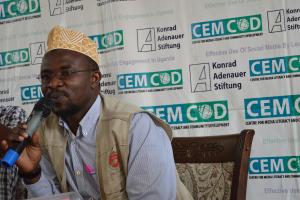 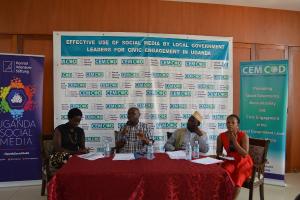 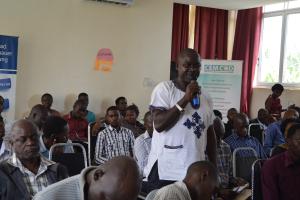