The National Youth Council in collaboration with Konrad Adenauer Stiftung facilitated a public dialogue in order to explore ways to improve communication between the NYC and its constituencies and to identify areas of synergies and collaboration with youth wings of all political parties.
March 31, 2017 Ordering Information 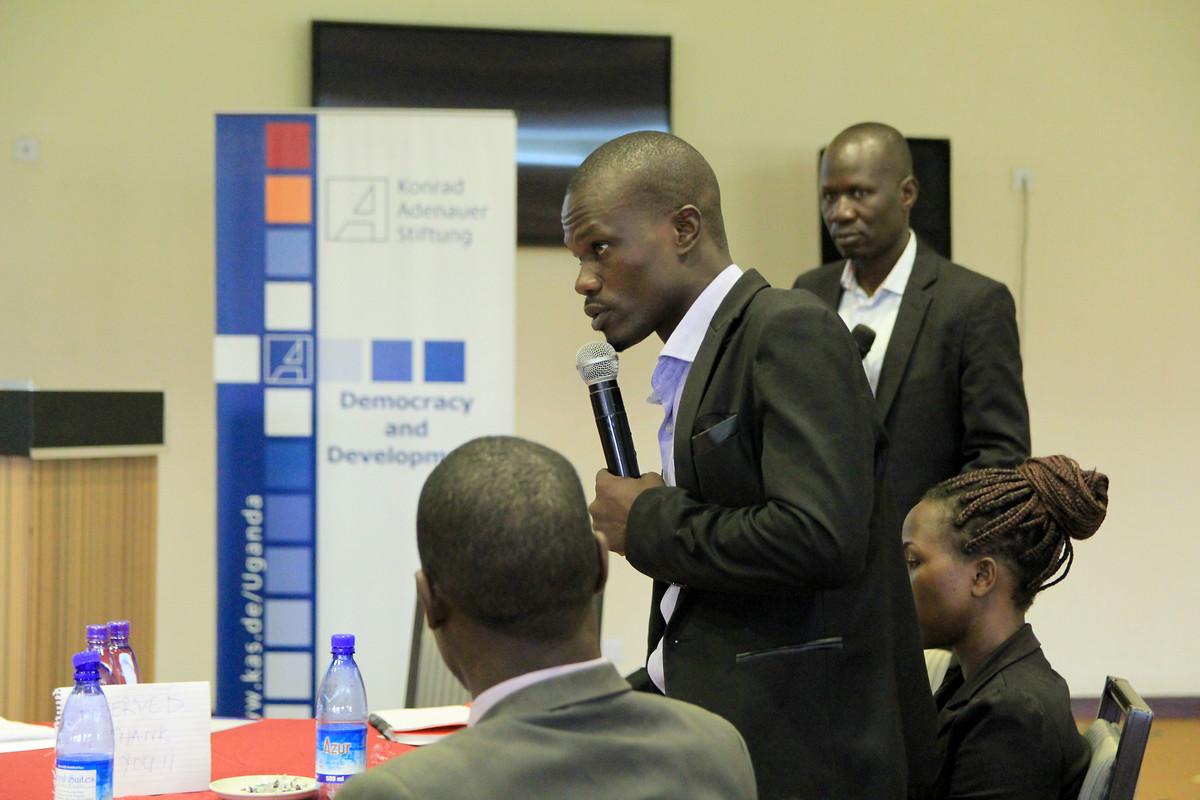 In any democratic system, the relationship between institutions and the constituencies they represent should be built on a mutual understanding of the institution’s role and on a basis of trust. In the absence of such trust and understanding, the relationship can become strained, leading to dissatisfaction among the public and a political disenchantment with the institution’s work. The National Youth Council as a public institution is charged with the representation of all youth in Uganda, regardless of their political affiliation. However, in the past it has seen itself faced with persistent criticism vis-à-vis its leadership, accountability mechanisms and alleged lack of independence from the government.

In order to address these concerns by creating a mutual understanding of the NYC’s role and mandate as well as to identify areas of synergy and cooperation between the council, youth wings of all political parties and civil society organizations, the National Youth Council in cooperation with Konrad-Adenauer-Stiftung Uganda organized a public dialogue bringing together representatives from the youth wings of all political parties as well as envoys of selected civil society organizations.

The beginning of the event was marked by the opening statement of NYC Chairperson Lillian Aber. She explained the nonpartisan mandate and objectives of the NYC and urged all participants to work together closely: “We cannot work in isolation; we have to work as a team.” Her remarks were followed by a statement by the Minister of State for Children and Youth Affairs Hon. Nakiwala Kiyingi Florence. She voiced her view that young people should be optimally facilitated to make their contribution to the country’s development. Regarding the fact that “the NYC is almost 90% one party”, she urged opposition parties to devise means for better representation. Before opening the floor for a Q&A session, she assured youth that their voices are heard: “The government won’t stop listening to your ideas.”

Following the session with the minister, the participants were addressed by Kararira Saidi who shared highlights of the National Youth Council Act and the role of NYC in today’s politics. He set the scene for the keynote speaker of the day, Dr. Salie K. Simba from the Department of Political Science and Public Administration at Makerere University. His presentation was focused on “Youth in a multiparty democracy”. He portrayed Ugandan history as containing various examples of successful youth struggles to liberate their countries. However, in terms of youth frameworks, current political parties of all affiliations leave much to be desired. Dr. Simba named the main functions prescribed to youth in the political landscape of today: As foot soldiers, potential source for parties, potential voters and people with energy for campaigning. In view of this, the youth activism in Uganda has not been translated into actual youth programs for youth political participation. Furthermore, he explained, the youth of Uganda is obstructed from political participation by three major constraints: the constitution, which sets a minimum age for voting and becoming president; senior politicians who are reluctant to make way for their younger counterparts and a lack of resources. Dr. Simba further called for action from the side of political parties: "If political parties are genuinely interested in including youth, they should adequately fight for it."

The afternoon session of the dialogue was opened by a presentation from Mr. Tamale Stewart from the Electoral Commission. He briefed participants on the function and composition of the Electoral Commission as well as the electoral processes for the NYC elections. He was then one of the participants in an interactive Q&A session with the audience, the other one being an NYC spokesperson. The discussion centered around some key questions, one of them being the perceived lack of voters’ education prior to elections that leads to many youth being insufficiently informed on the topic. Equally as heatedly debated was the question if the NYC can actually be a nonpartisan agency and be perceived as such.

Subsequently, a presentation by Dr. Peace Musimenta led everyone to take a step back from the dimension of party politics and consider the question of women’s involvement in political processes. According to Dr. Musimenta, despite a very gender sensitive constitution, women’s actual participation in politics is still limited. She labeled the focusing on reserved seats for women a “political ghettoization” and explained that despite an increase in female political leadership, actual change can only be brought about if women strategically use their influence. Naming the persistent barriers to female leadership in the political and party landscape, Dr. Musimenta then called upon everyone present for increased efforts to strengthen gender equal participation.

The day’s discussions and presentations were crowned by a panel discussion consisting of Dr. Musimenta, a Lecturer the school of Gender and Women studies Makerere University; NYC Chairperson Lililan Aber; Hon. Fred Mukasa Mbidde Vice President of the Democratic Party and Tamale Stewart from the Electoral Commission. The panel explored the gaps that exist between the youth leaders after elections and how the NYC can become more inclusive. The chairperson of NYC, Lillian Aber, implored the youth from the various youth wings to pick interest in the youth elections. She however noted that they needed to begin preparing early enough. Mukasa Mbidde, an accomplished politician, shared his journey to the apex of leadership in his party and the region. He attributed his success to the tenacity and deliberate decisions he took to build his capacity to voice the concerns of the youth. The panelists noted that the political terrain for youth in Uganda is not straightforward and that the youth should not expect anyone to make it even easier. Dr. Musimenta urged the youth to make use of their youthful skills and energy to position themselves strategically for leadership roles.

The dialogue ended with an appeal from the youth to the leaders to give more consideration to the youth or the youth will compel them to listen to them.