2019 SOCIAL MEDIA CONFERENCE: THE PROSPECTS FOR DIGITAL POLITICS IN AFRICA

On 25th June 2019, Konrad Adenauer Stiftung Uganda held the 5th annual social media conference at the Xanadu Collection hotel. The theme of this year’s conference was: Social Media and the Prospects for Digital Politics in Africa. In attendance were journalists, Media experts, bloggers, social media influencers, representatives from government, political leaders, Civil society and representatives from the academia. The conference followed a multifaceted program with parallel workshops in the morning, a keynote address and panel discussion in the afternoon followed by a series of parallel activities including lightning talks, digital campfire conversations and round table talks.
June 27, 2019 Ordering Information 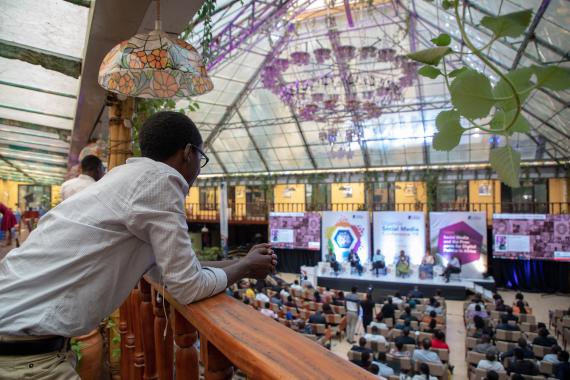 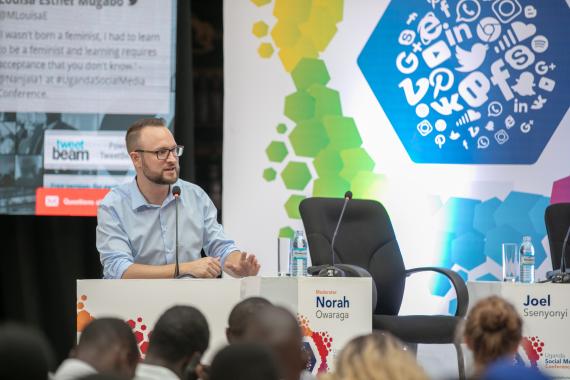 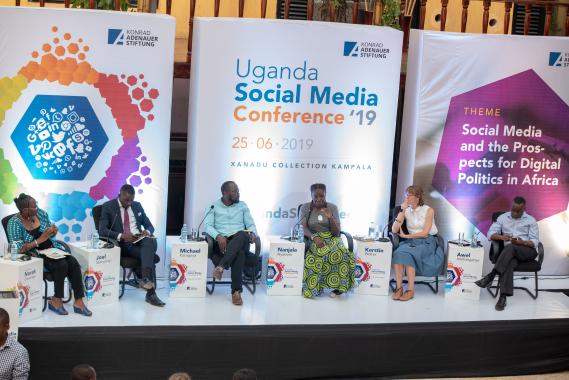 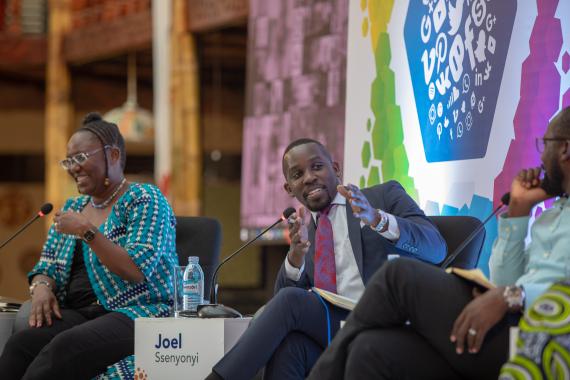 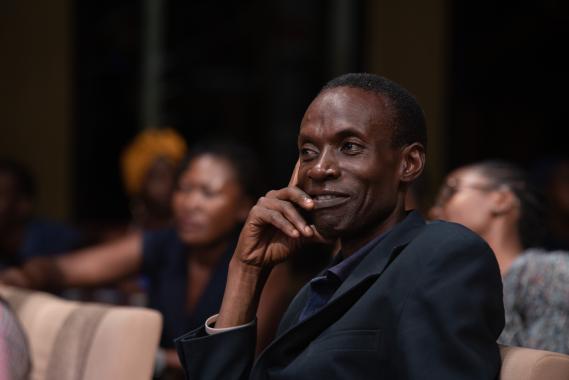 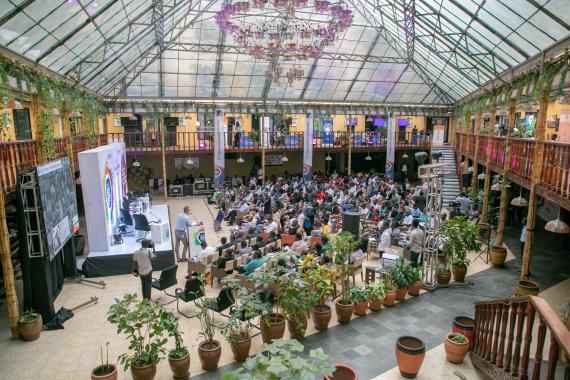 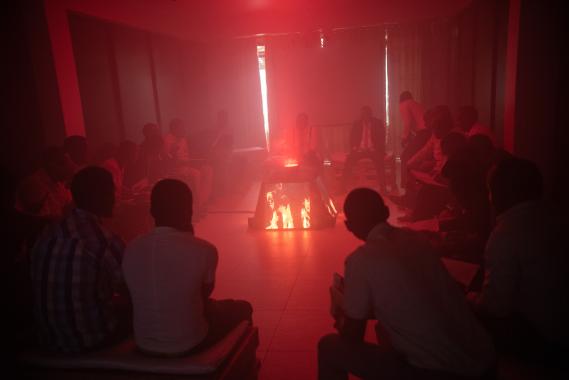 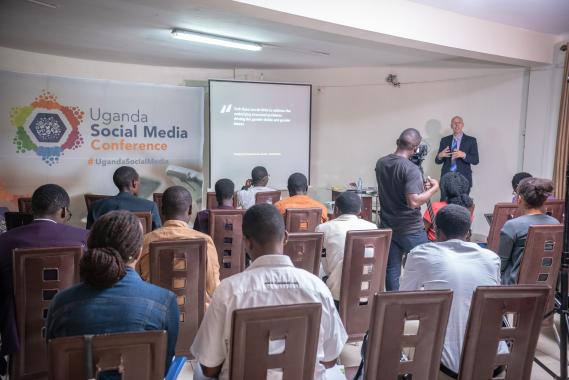 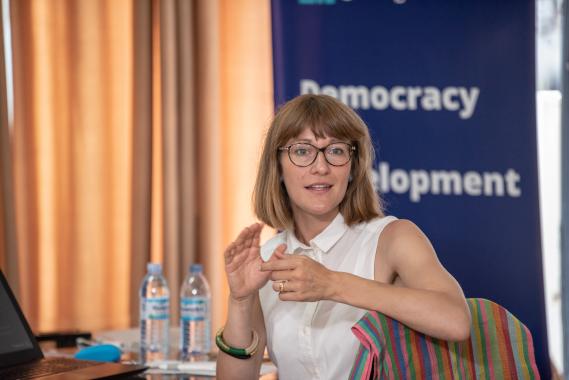 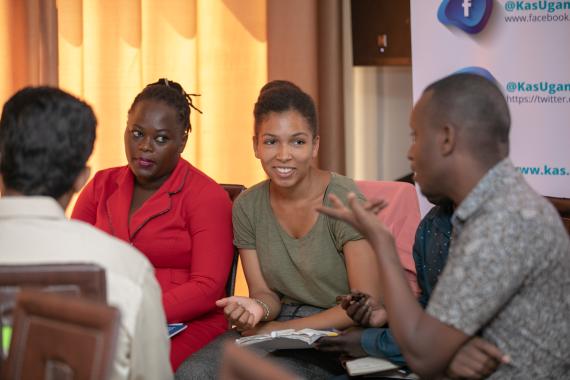 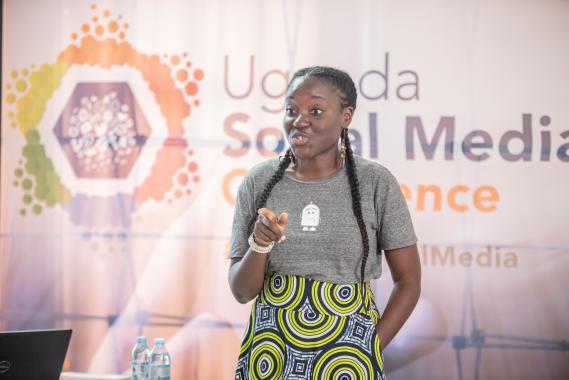 On 25th June 2019, Konrad Adenauer Stiftung Uganda held the 5th annual social media conference at the Xanadu Collection hotel. The theme of this year’s conference was: Social Media and the Prospects for Digital Politics in Africa. In attendance were journalists, Media experts, bloggers, social media influencers, representatives from government, political leaders, Civil society and representatives from the academia. The conference followed a multifaceted program with parallel workshops in the morning, a keynote address and panel discussion in the afternoon followed by a series of parallel activities including lightning talks, digital campfire conversations and round table talks.

The purpose of this conference was to facilitate a constructive exchange on the impact of social media on state and society, highlighting both opportunities and challenges.

The second workshop was hosted by David Girling, a Senior Lecturer at the University of East Anglia, UK. He explored how power and capital dynamics offline are reflected in online spaces. The people with influence offline tend to have power online as well which makes it difficult to gain influence online if you don’t have it already which leads to inequities in social media. He further explored the statistics of Ugandan internet usage, which show that the greatest number of Ugandans online use Facebook. He noted that despite the success of social media campaigns, the extent to which women’s online activism has been able to shape and influence policy-making remains unpredictable. Through group-based discussions, the participants identified strategies on how to reduce inequities in the digital public sphere, use the digital space to influence policy and how social media can reduce stereotypes and promote gender equality.

The afternoon session was kicked off by Mathias Kamp, country director of Konrad Adenauer Stiftung. He welcomed the participants and noted that the focus of the conference was the implications of social media on society, provision of information in the civic and political sphere.

The keynote address was delivered by Najala Nyabola, Author of Digital Democracy, Analog Politics. She addressed the complexities of digital democracy in the region and examined the benefits and dangers of social media. Free expression, political organizing and demand for accountability are some of the benefits of social media, however, the dangers should not be overlooked. Social media has enabled new forms of violence targeting women especially, who are normally the victims of cyberbullying and online harassment. As a tech realist, she is cognizant of the fact Technology doesn’t do anything, on its own, it is people who use it and the responsibility of shaping the outcome, tone of the social media space depends on the users.

The main panel discussed the perspectives for digital democracy in Uganda. Host, Norah Owaraga contextualized the digital reality in Uganda by quoting an article from the Guardian, “the problem is out in rural areas, people feel far from where decisions are made.” This shaped her conversation with the panellists who shared their varying opinions on the political usage of the internet in Uganda. While there is active engagement online, the digital environment in Uganda remains harsh with the introduction of the social media tax which has substantially reduced online engagement.

Participants raised their questions and comments in the active plenary discussion that ensued. The areas of concern were fake news, online surveillance, internet shutdowns, online activism and leveraging social media for political analysis.

The participants were then ushered into five break away sessions and an open market session where they could interact with various exhibitors working in the digital space.

The first roundtable discussion explored social media digital etiquette and the changing nature of human interactions. Social media has revolutionized the way people interact with each other. Through non-human interactions, the world has become a global village. Digital etiquette, however, would be difficult to implement because it is not possible to have full control of how people use social media platforms. Even with the laws and policies in place, their selective implementation leads to apprehension for selected people. The key issues raised in this session were; personal responsibility, responsibilities of the government and the proprietors of these social media platforms.

The second round table talk sought to articulate the professional and ethical implications of bloggers and influencers. The rotary 4-way test “Is it the Truth, is it fair to all the concerned, will it build Goodwill and better friendships, and Will it be beneficial to all concerned” was fronted as an ethical guide for blogging. The discussants encouraged integrity, purpose and finding a niche.

The campfire chats were a series of informal interactive discussions where participants shared their views on stimulating youth political engagement, social media as a tool and how social media shapes our perceptions of self and others.

In his closing remarks, Donnas Ojok, Programme Officer at Konrad Adenauer Stiftung thanked all the speakers, participant, service providers and his team at KAS for working together to create the social media conference. He encouraged everyone to implement what had been learnt to create meaningful change on the Ugandan digital landscape. He further urged everyone to constructively engage on social media.