From 26 to 27 January, LéO Africa Institute hosted the graduation seminar at Lake Victoria Serena Resort for the inaugural class of their Young and Emerging Leaders Project (YELP) in cooperation with the Konrad-Adenauer-Stiftung. YELP brings together 20 outstanding thought leaders from Uganda, Kenya and Rwanda that have backgrounds in media, social entreprise, the arts, and business.
February 2, 2018 Ordering Information 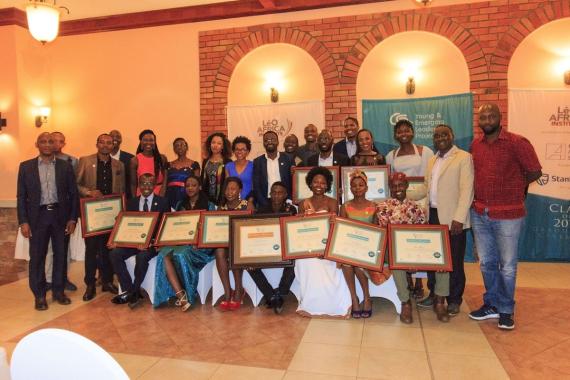 The fellowship program is designed to train and orient the young leaders’ values of self-advancement, integrity, social responsibility and socioeconomic transformation. The 2017 YELP fellows previously undertook two seminars addressing leadership from a personal point of view as well as achieving success as a leader. At the graduation seminar, the focus was placed on moving beyond individual success as a leader to achieving significance in society. The basis of each of the seminars is formed by readings of texts by prominent personalities, which are critically discussed and reflected upon by the fellows. To reflect the topic of the graduation seminar, among the readings chosen were texts by Theodore Roosevelt and Martin Luther King. Their perspectives on the responsibilities of leadership and citizenship were critically discussed by the 20 fellows in the context of their own respective experiences as business people, media personalities, activists or artists.

The reading sessions were complemented by inputs from invited guests. Alan Kasujja, BBC Journalist and presenter at BBC Newsday, spoke to the fellows about using media to shape the African narrative. More often than not, the African continent is portrayed in a negative light while its stories are primarily told by Western media. He encouraged the fellows, especially those working in the media sector, to keep telling their own stories, because "the more you talk about your own stories, the more the rest of the world will get curious and listen". Danstan Mugarurua, a Ugandan born entrepreneur living in the UK spoke to the fellowship class on ‚keeping sight of the thread’ – not losing one’s vision in the face of challenges and adversities.

The highlight of the seminar was the formal graduation of the YELP Class of 2017. Awel Uwihanganye, Director of LéO Africa Institute, emphasized the transformative role the fellows have been playing in transforming Africa, be it as journalists, architects, real estate agents or as filmmakers. Mathias Kamp, KAS Country Representative, underlined the deep and lasting personal connections the young leaders have been able to establish during the course of their fellowship. He also reminded the fellows to continue reflecting on their role in society as leaders, asking: “how can leaders use their privilege to transform society, contribute to the common good and help people beyond their own space?”. Alinaitwe Cleofash, a young and ambitious agriculturalist that founded an urban agriculture initiative was awarded with the first Magnus Muchunguzi Award for his outstanding leadership as a fellow. Speeches by various fellows showcased the impact of the fellowship on their personal growth and reflection.

Upon graduation, the YELP alumni form part of the Institute’s growing network of outstanding thought leaders across East Africa who are leading in critical sectors. The overall aim of the programme is to build a critical mass of individuals committed to personal development, advancement of career, and shaping a progressive future for Uganda and East Africa. 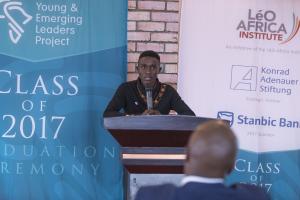 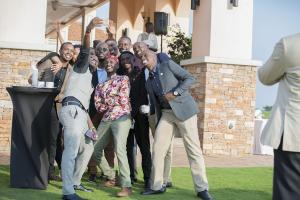 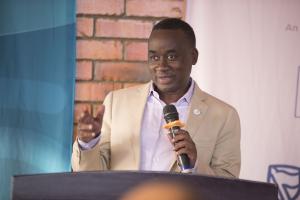