On the 10th of March 2017, the University Forum on Governance in partnership with the Konrad Adenauer Stiftung organised a roundtable discussion at Makerere University, Kampala. The discussion aimed at reflecting on the initiatives by the two dominate agencies – political parties and the civil society organizations in advocating for the fair representation of the youth interests at policy discussion levels.
March 14, 2017 Ordering Information 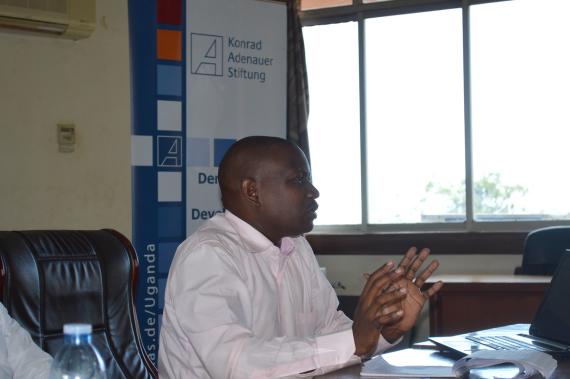 This followed a continued manifestation of the gap in national policies and development papers that can effectively solve the challenges that face the youth. The discussion was attended by selected representatives of youth from the different political parties, the civil society organisations as well as student leaders from Makerere University.

He also argued that the role of the civil society should be to mobilise the public and provide civic awareness on the different social programmes. Further noted was that the works of the civil society organisation is increasingly seen as destabilising to the democratisation process. This is because CSOs have created the need for democracy among the public without developed institutional framework in place to provide the need levels of democracy. This observation does not render the efforts of the CSO wished away, rather calls for commensurate effort in building the institutional frameworks (political parties) necessary to deliver to the interests of the public.