The Governance of Civil Society in Uganda

A framing workshop by the Centre for Development Alternatives and Konrad-Adenauer-Stiftung, critically evaluated the key question which the Reality Check research seeks to answer.
February 12, 2019 Ordering Information 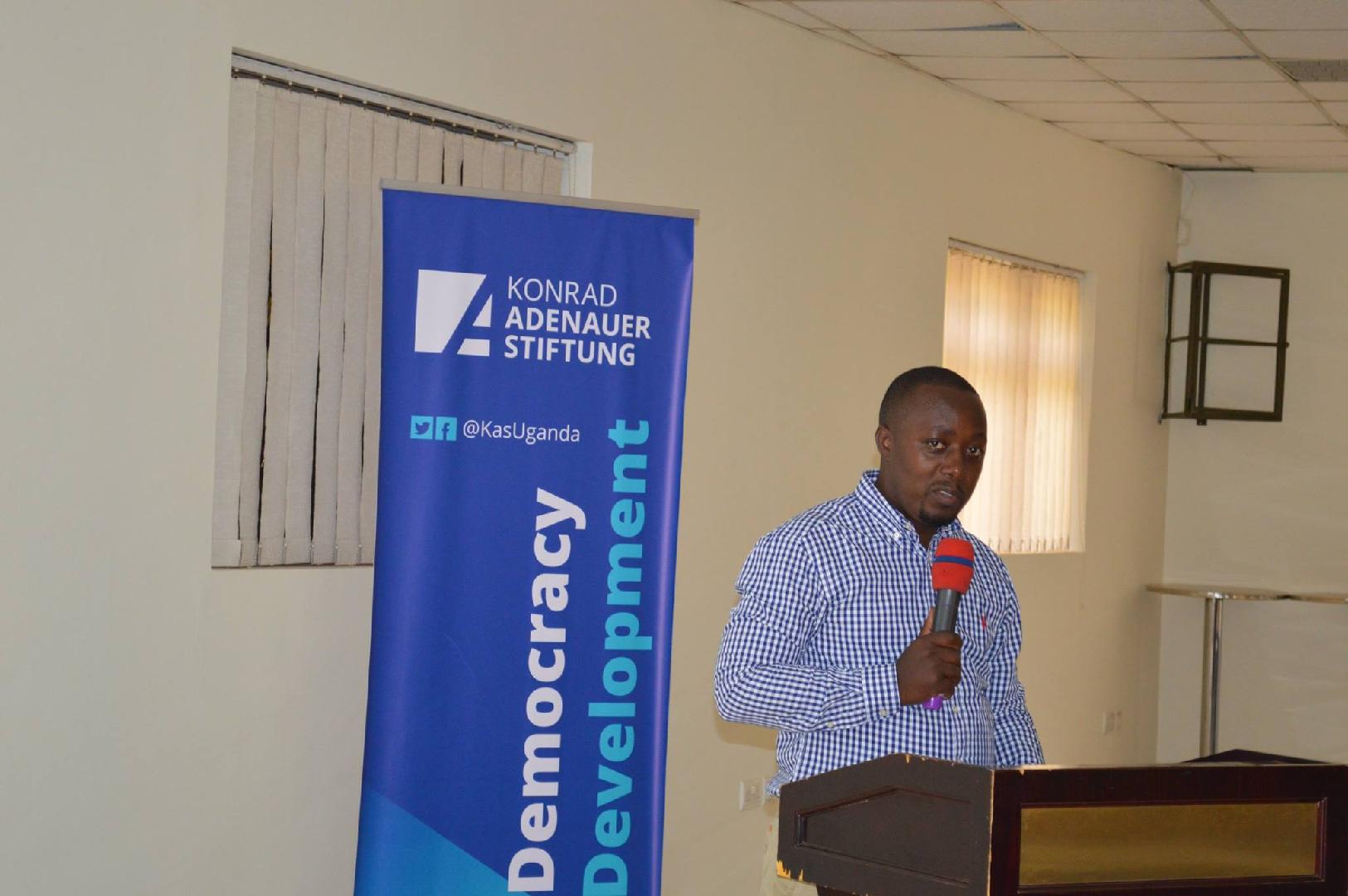 Bernard Mukhone presents the background of the Reality Check series 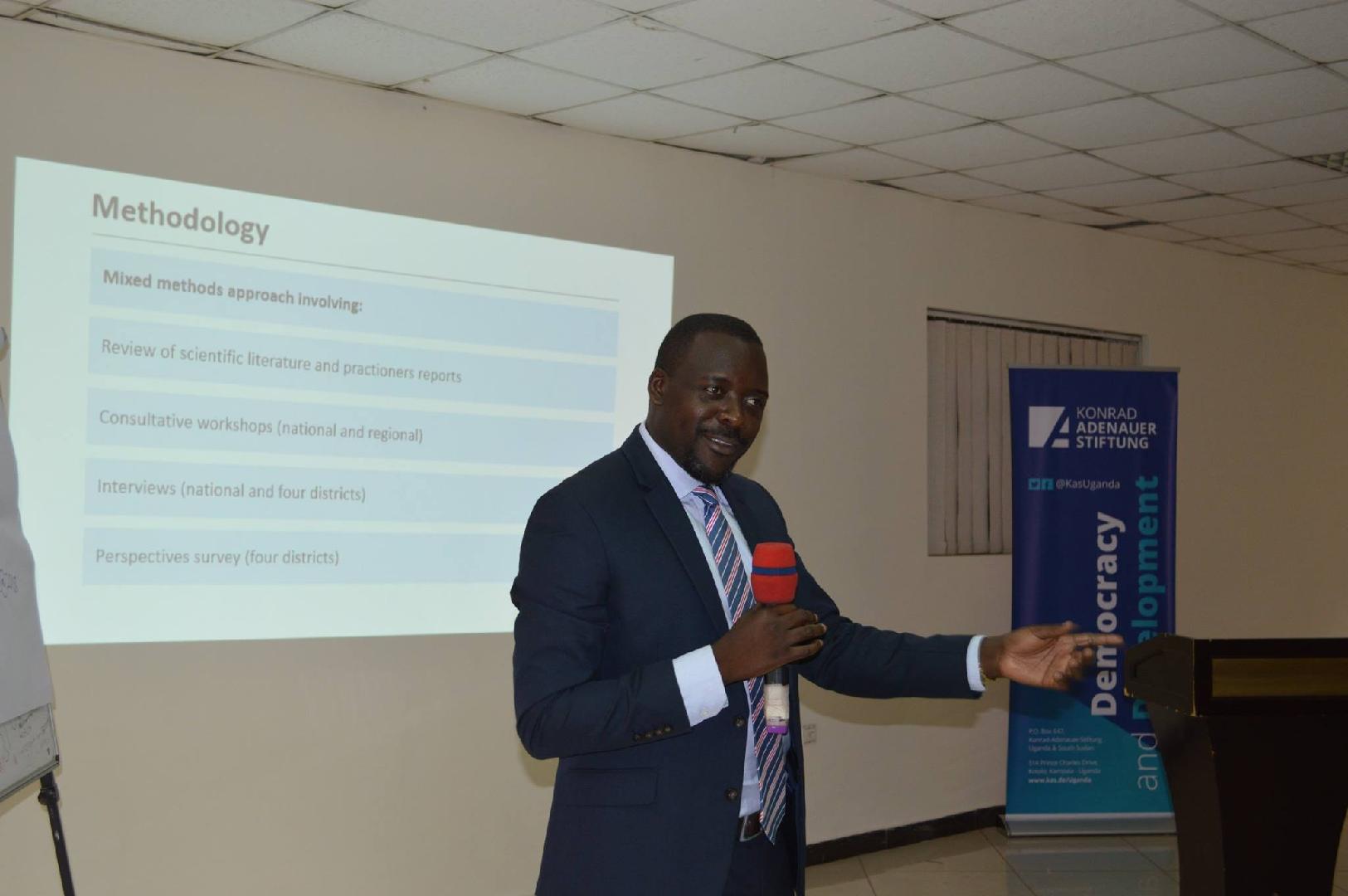 Research shapes knowledge and knowledge shapes the world. As KAS supports scientific research and promotes critical questioning of such, its own work is being reflected just as critical. This time the Reality Check will focus on the role of Civil Society, including NGOs, trade unions, and cooperative movements within Uganda.

Besides the researchers being directly involved in the paper, the workshop brought together 20 experts with different backgrounds, ranging from academics from Makerere University to people involved in civil society work. This wide range was intended to bring on board a broad range of insights on the current state of civil society.

Michael Mugisha, co-director of CDA, emphasized the chances and importance of Civil Society Organizations, referring to their role in driving inclusive development and as advocacy of pro-poor policies as well as a partner in the delivery of public goods and services. The organizations were identified as an important linkage between the government or politics and the population. Hence, their weak influence and lack of cooperation were criticized. As a result, the research aims at an improvement of this situation, to enable Civil Society Organizations a stronger impact on politics. This approach was strongly supported by the participants of the workshop, even if perspectives on how this should happen differed.

Yusuf Kiranda, the principal researcher, then raised questions about the main problems of the project. Despite the challenges concerning data access and the transparency of some organizations’ work, the research project was however strongly appreciated and supported within the workshop. This discussion was not open from the very beginning, but started in smaller groups debating the main issues of the paper, theoretical and empirical ones. In these smaller discussions, consensus has been reached and some unclear facts were clarified, but most importantly the different backgrounds of the participants were combined in a fruitful discussion to collect further questions.

Afterwards, the discussion continued with all experts, now involving all the different backgrounds. The participants engaged in the discussion and seemed highly motivated, giving many different perspectives on the topic. The huge amount of different insights and interests contributed to the conceptual structure of the research and specific points were discussed as anthropologists, political scientists alongside NGO representatives tried to find mutual positions on the issue. The motivation of all the participants was clearly visible, not only when they discussed the core concepts and methodology of the research but also extended the discussion to more general questions like: “What should development in Uganda look like?”

Combined, the participants were able to bring the research itself to another level and had a successful discussion on the issue. The report itself can be expected to give interesting insights as challenging questions remains, like the one raised by one participant asking if “civil society organizations represent the right people?” Such questions will hopefully be answered within the Reality Check, after the productive workshop.