The KAS scholarship programme gave my career a new direction

Since 2001, the Konrad-Adenauer-Foundation continues to offer scholarships to students in the various fields related to democracy in partnership with the Uganda Martyr's University, Nkozi. On 14th of October the annual KAS scholarship and Alumni holder meeting took place in Kampala. The programme supports the studies in Democracy & Development, Governance & Human Rights as well as the newly introduced Research & Public Policy offered at undergraduate and post graduate levels.
October 21, 2016 Ordering Information 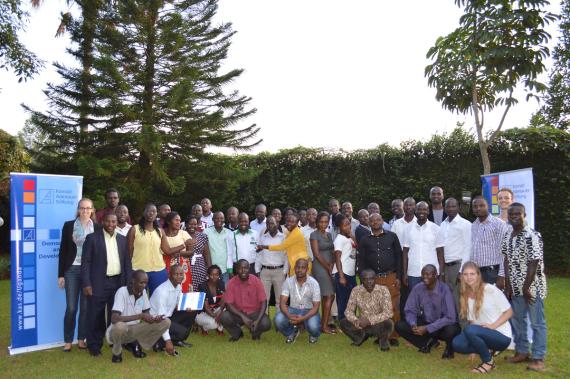 The scholarship scheme has led to the transformation of many students/scholars in their respective careers and political engagements. Every year, the scholarship holders and alumni come together to share experiences, update KAS and fellow scholars on some of the exciting developments in their careers as well as network with each other.

This year's meeting gave the participants not only a platform for the exchange and personal contact, but also informed the current and new fellows about the activities of KAS and its internal structure.

Joachim Buwembo who is a seasoned journalist and media consultant gave a key note address at this year’s scholarship networking meeting. He discussed the role of the media in promoting human rights in Uganda. Buwembo who revealed that the KAS scholarship shaped and gave his career a new direction alluded to the relevance of the media in continuously shaping relevant public discussions about key issues that affect Ugandans. He expressed his disappointment with parliament which he noted was in the process of handing their oversight role on key public issues to the minister of ICT and Information to decide what information is good and bad. Participants actively engaged him during the plenary discussion, pointing out some of the media challenges in their local contexts as well as suggesting practical ways of improving the situation.

The meeting ended with the ceremonial signing and handover of contracts to the new scholarship holders as well as a joint dinner where interesting discussions and networking continued. 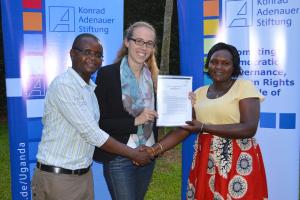 Handover of contract to Scholarship Holder 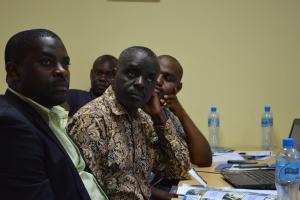 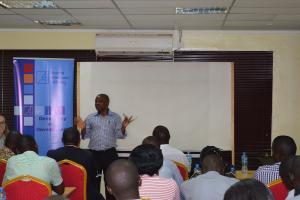