The third workshop this year on good governance in a multiparty system at district level highlighted possibilities how participants may assume their role in becoming active, patriotic and effective leaders, thereby successfully fulfilling their duties in fostering civic education in their communities.
June 21, 2018 Ordering Information 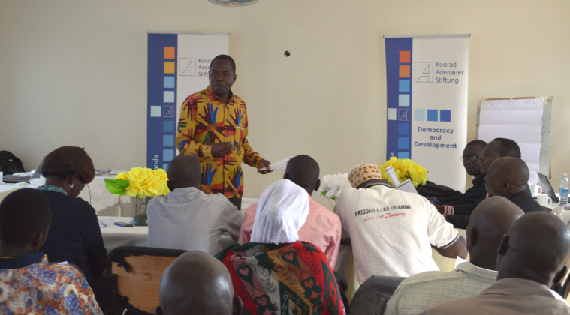 In cooperation with the Directorate of National Guidance (DNG), the Konrad-Adenauer Stiftung (KAS) aims to spread knowledge and practices in each of Uganda’s districts about the role of the different representatives in a multiparty system, to develop political pluralism in the country. The latest workshop took place in the West Nile Sub region with over 40 elected and appointed leaders from the three participating districts of Koboko, Maracha and Yumbe.

John Oyambi, project officer at the DNG, emphasized in his opening speech that leaders should take up their responsibilities to strive together to “make this country a better place”. Then, Dr. Milton Mutto, himself coming from the region and being a designated expert on the topic of decentralization, gave an interactive presentation on the role of civic education in nation building. To overcome persistent challenges such as illiteracy and school drop outs, land conflicts or corruption, leaders should raise civic awareness by communicating to people their rights and simultaneously their obligations. Building an active and patriotic citizenry is a continuous, long-term process, requiring continuous efforts and leading by example. Strengthening community action was pointed out as one way of forming a caring and considerate society in which citizens realize that “not the government gives”, but they themselves have the possibilities and means to give, self-governance being the key. Later, participants discussed local and central budget allocation as well as government spending responsibilities and priorities. Awareness that district leaders need to strategize and plan timely with their allocated funds to improve pressing issues was raised. Then, Elisabeth Ayume, representative of the RDC Koboko officially opened the training. After her speech, the development of a competitive market of mobile phone service providers in Uganda illustrated how the community benefits through the power of choice and competition. Generally, a strong opposition can enhance and challenge government policies. The first workshop day ended with a presentation and discussion of the understanding of the roles of leaders and related challenges. Mutual trust, respect and collaboration are the necessary basis in achieving a lasting impact within the local community.

The second day of the workshop started off with an interactive presentation by Ssango Ssali, representative of the DNG. He showed how district leaders can help to achieve Uganda’s national vision by 2040, transforming the country into a trade and tourism hub. John Oymbi then highlighted the negative as well as positive impacts of conflicts within a community: Opposing views may shake existing structures and lead to a re-evaluation of predominant practices. The workshop concluded by summarizing takeaways and recommendations: “a house is built by hands, but a country is built by an open heart and positive mindset”. 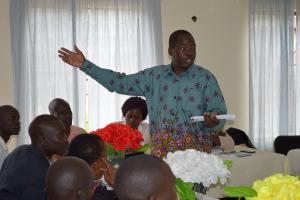 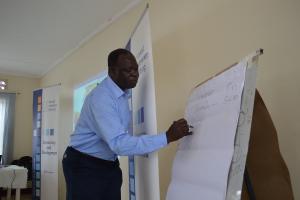