The KAS Scholars meet annually at a fora where the discuss topics that are relevant to their study and related to the areas where KAS works. On the 28th, the KAS fellows discussed the relevance of Social Market Economy to the Ugandan development trajectory making recommendations to improve the Ugandan economic models.
May 8, 2017 Ordering Information 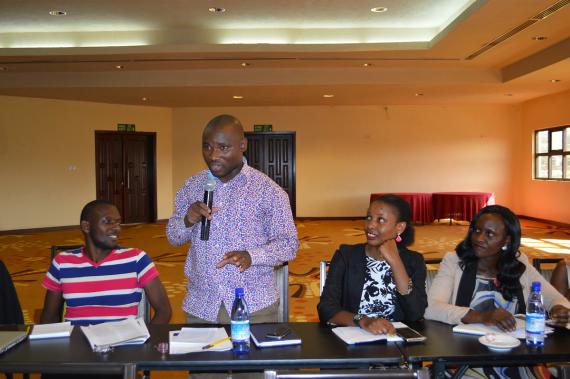 The KAS Scholarship Programme aims at enabling future leaders to attain higher qualifications in the various areas to become drivers for positive change in their communities and their country. Besides the regular courses and lectures at Uganda Martyrs University (UMU), the students are invited to a set of events that provides additional knowledge for them that may inspire them in their own work. This time the concept of Social Market Economy was the focus of the day to trigger discussions aimed at learning some lessons for improving the Ugandan economic model.

Michael Mugisha, a Development Management expert chronicled Uganda’s economic model and the different development strategies the country has gone though over the past decades. The economic model of Uganda was changing between rather socialist models and very liberal systems and is right now characterized by increasing division between the rich and the poor. The problem of no interference of the state into the market in most cases and the dependence of foreign donations for infrastructural projects causes a model that is rather reactive to upcoming crises while long term solutions have not been thought through by the government. This implies that increasing challenges such as youth un/under-employment, infrastructure development, poor healthcare and education systems among others cannot be effectively addressed without a clear system in place.

Following the background presentation of the Ugandan economic situation, Mathias Kamp Country Director of KAS Uganda and South Sudan made a compelling argument about the German approach that enabled the now world economic power to emerge out of their difficult history and economic crisis after the 2nd world war.. The Social Market Economy was established in the 1950s and has been the market system in Germany ever since. It combines different values that guarantee the maximal freedom of individuals in a solidary society that provides security for cases in which the individuals fail in their attempts to successfully economize. All of those are defined in a set of laws and have become part of the German culture to some extent. The market is therefore free and the performance of individuals is what improves their life situation. The state regulates the market in order to ensure that people have the same chances to this success and is able to absorb the failures of some individuals. With this the Social Market Economy can help to bring economic progress, fair opportunities and social welfare.

Mathias Kamp stressed that this approach is no blueprint for other countries since the cultural, economic and societal preconditions differ a lot and because the Social Market Economy as a concept is no set of rules but a set of values that do not provide a clear pathway. Instead, it required constant debates about all parts of the society to define to what extent the liberal market and the social welfare should be applied in every special case. Sometimes decision-makers must do unpopular things for the long-term welfare of the society, as Mathias Kamp puts it “It is easy to do something that people like. The question should always be: what should we do to transform our society.

The input presentation by Mathias Kamp triggered discussions about the likelihood of this model succeeding in a country so flawed without functional institutions. The most probable response to this would be the adoption of some of the values and principles that Uganda thinks would work for its kind of system. One participant summed up the roadblocks to this system in Uganda into one – bad governance. Scholars were challenged to champion the promotion of good governance in their respective spaces as ambassadors of change. There was consensus about the effectiveness of Social Market economy (SME) towards triggering economic transformation and progress for Uganda. Question would be, is Uganda willing to learn some lessons from this model and apply them?