A NEW PLATFORM FOR YOUNG AND EMERGING LEADERS IN UGANDA

by Donnas Ojok
What inspires servant leadership? As a political foundation, we are always in a relentless pursuit to not only find the answers to this question but always provide a platform for taking action. As such, we have, in partnership with the LeO Africa Institute launched the Young and Emerging leaders’ project (YELP) to act as a Launchpad for accelerating servant leadership in Uganda.
November 17, 2016 Ordering Information 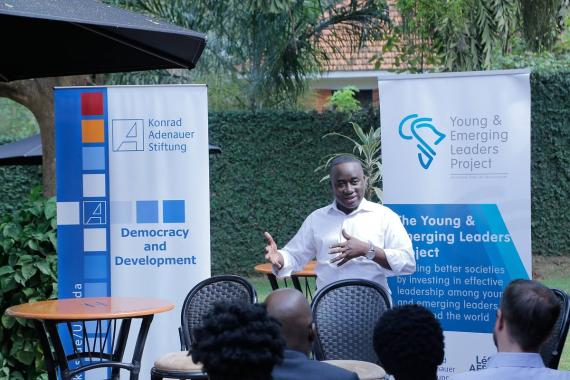 On the 12th Nov 2016, we pooled together 20 of some of Uganda’s most proactive youth from a wide spectrum of professional fields to attend the inaugural seminar held at Humura Resort. With backgrounds in architecture, medicine, law, journalism, social and political science among others, these young leaders learnt how to identify and cultivate the tenets of servant leadership in their day to day lives. They also had to opportunity to explore how to set values, shape mindsets and attitudes. Further still, the workshop enabled them to understand the theories, paradigms and practices that make transformative leadership attainable.

One of the main highlights was the discussion about Viktor Frankl’s leadership philosophies in his bestselling book Man’s Search for Meaning. “Between what happens to us and our response to it, lies a space - our power and our choice”, said Francis Egbuson, the session facilitator. He emphasised the prominence of choice, noting that everybody has an innate ability in them to choose how they respond, and that Leaders must learn to take full responsibility for their choices. “You’re a product of your decisions and choices, and NOT your circumstances,” he said.

Choices are facilitated by knowledge and information. However, in the age of information overload occasioned by digital disruptions and distractions, making these choices is ever becoming difficult. To this effect, Francis recommended the significance of what he called ‘practicing Presence’ - which is the ability to be attentive, to be able to have a full grasp of the situation, to inform your course of action. The consensus was that to make the best information and not be overwhelmed by it, a leader should be able to sieve and use that information that relates to their work, passion or niche, and make the best use of it.

What informs Leadership? Michael Niyitegeka noted that most times, our ambitions and aspirations are informed and shaped by what the world judges as success, but warned that what actually defines and distinguishes one as a leader is what they can do. He said that leadership begins from self, and that recognizing one’s abilities and what they can do is the first aspect of leadership. Most often, he noted, we make the mistake of living life for others, playing according to scripts written by society, which in the long run breeds frustration, & diverts us from discovering our innate strengths and using them to influence society.

One of the best highlights of the workshop was a reading of Patrick Lumumba’s letter to his wife. The letter extolled by virtues of passion, honesty, love and patriotism. His patriotism and ability at such an early stage of Congo’s Independence to judiciously analyse the deep problems afflicting the country was as subject of intense reflection.

Why do some nations fail while other succeeds? This political economy question derived from a classic text by Daron Acemoglu and A.J Robinson provided an important opportunity to reflect on some of the contextual and conceptual underpinnings of leadership. Mrs Mariam Luyombo who led the discussion argued that at the centre of transformative leadership are caring Leaders. Sharing from the book, she argued that she was convinced that deliberate government interventions can produce transformative leadership. She argued that inclusive politics brings about inclusive economics, which levels the ground for people to innovate and prosper.

She gave the example of Britain, noting that the democratic revolution of the 1860s had heralded significant positive changes in governance, aided by significant checks against abuse of power that enabled equitable use of people’s taxes.

In the ensuing conversation however, Michael Mugisha questioned the book’s choice of case studies, noting that Britain had had a long history as a nation-state using trade and capitalists and that the ensuing middle class had used their capital to influence reform, which coupled with a significant resource envelope thanks to its industrial revolution had enabled it to undertake delivery of better public services. He always opined that leaders often do not care but they only start caring when the citizen start to care by demanding accountability from their leaders.

Dubbed, “A Call to Action; Defining this Generation’s Cause,” the final session of the day was delivered by Mr David K. Mpanga. David started by warning that as a privileged group in society, everyone’s responsibility is to use harnessed their youthfulness because it is the most productive stage of life. He noted that from Jesus, to Martin Luther King, the most venerated leaders had optimised their youthful years, and that there’s no reason the participants shouldn’t. He enumerated the biggest dangers to youth productivity as inaction, doubts, procrastination and fear, arguing that while thinking is good, thinking without action would border on day dreaming. He dared the young people to dream and step out to pursue their dreams. In this pursuit, he cautioned, upholding and being guided by values is a pre-requisite.

Mathias Kamp advised the young leaders to be courageous and let go the fears that draw back. 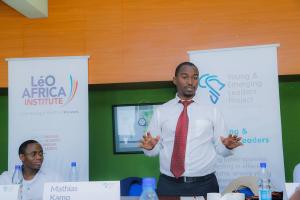 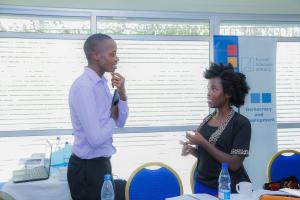 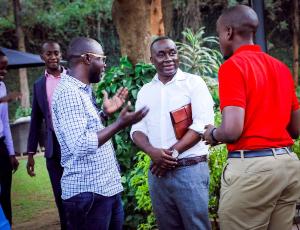 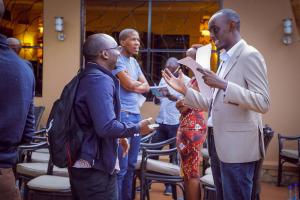 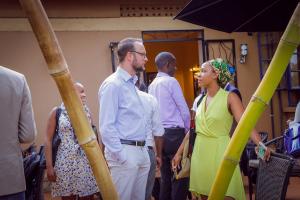