On 27 March 2015, a public dialogue organised by the University Forum on Governance (UNIFOG) and the Konrad-Adenauer-Stiftung (KAS) brought together secular and religious scholars to discuss the question of “Unity in Diversity: Perspective on Uganda as a Multidenominational Society”. While also discussing the roots and causes of religious radicalisation in Uganda, the dialogue was a strong call for religious tolerance, coexistence, and dialogue between people belonging to different faiths and denominations.
March 31, 2015 Ordering Information 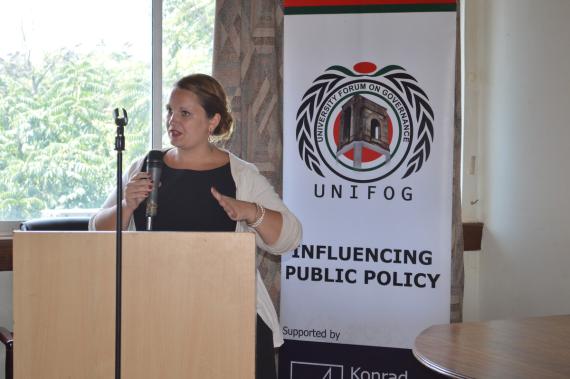 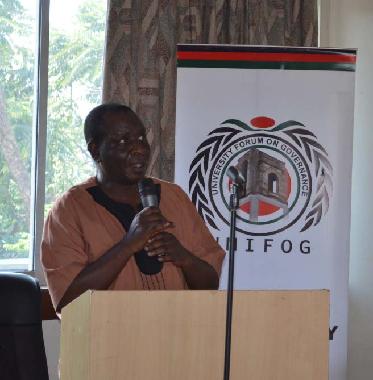 Mwambutsya Ndebesa holds the keynote presentation on perspectives for Uganda as a multidenominational society... 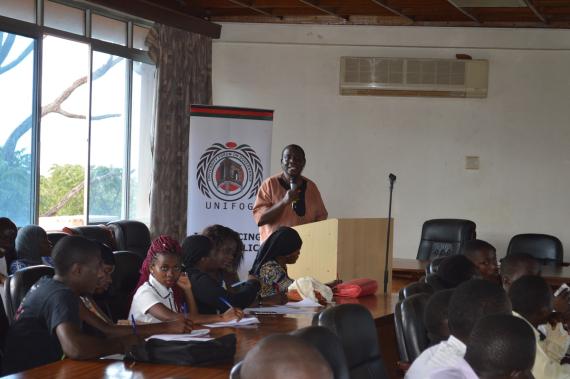 ... in which he emphasizes both the conflict and the peace potential of religions in Uganda. 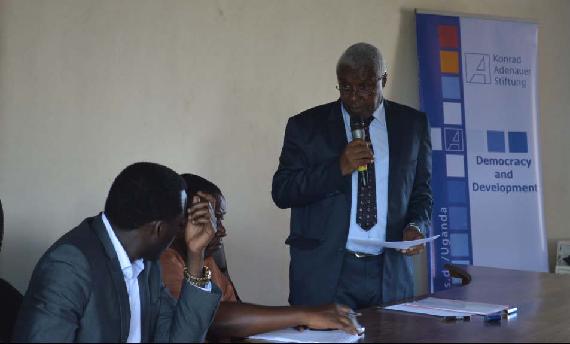 Assoc. Prof. Dr. Deusdedit R. K. Nkurunziza uses the panel discussion to state that being liberal and democratic is the best way for religions to coexist. 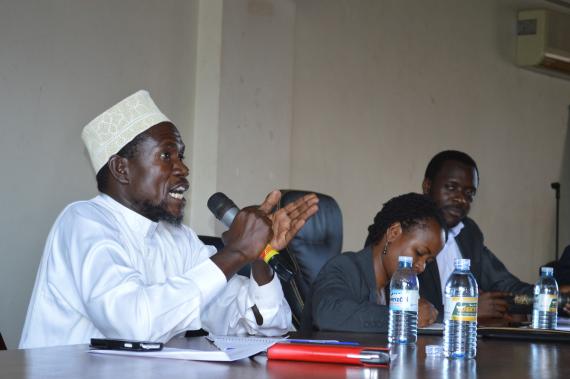 Imam Kasozi explains that in his opinion there was no rivalry between different Muslim denominations in Uganda. 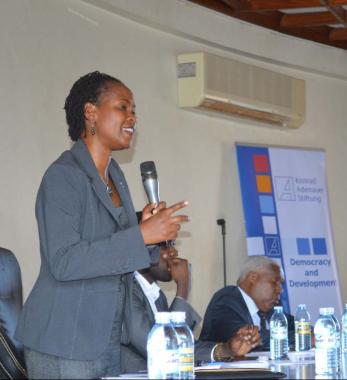 Dr. Sarah Ssali cautions that the other perspectives on radicalization, like tribalism or racism, should not be left out of the debate.

Religion plays a major role in the majority of Ugandans’ lives. While faith can be a positive and identity defining force for individuals and communities, it can also reveal negative, even devastating impacts when people belonging to a certain faith radicalise themselves. The effects of radicalisation manifest themselves all over the world and expose fundamentalism’s ugly face when radicalisation is turned into violent extremism.

Uganda has in the past experienced violence which was justified in religious terms. The Lord’s Resistance Army (LRA), which used a discourse based on a violent interpretation of Christianity, has terrorised especially the northern part of Uganda for decades and is today still active in other countries in the region. Furthermore, Kampala was hit by terror attacks by the Al-Shabaab, a jihadist terrorist group based in Somalia, in which over 70 people were killed and just as many injured.

Currently, the as of yet unsolved murders of Muslim clerics, the growing influence of religious discourse on politics, as well as the increasing acceptability of hate speech in media and places of worship raise concerns over increasing religious radicalisation within the Ugandan society. The dialogue organised by UNIFOG and KAS took place against this background and had the goal to investigate the question if that radicalisation is indeed there, to shed light on the causes of growing radicalisation in Uganda, and come up with possible prevention and intervention measures.

The keynote presentation was held by Mr. Mwambutsya Ndebesa, lecturer with the Department of History at Makerere University. He did not only give a scientific background on the core concepts in his presentation, but also introduced the audience to the history of religious violence globally and in Uganda, as well as to interdenominational tensions and conflicts in the country. He emphasised that religions have a big potential for peace building and that especially in Uganda there were a lot of opportunities for inter-religious and –denominational dialogue, as Ugandans have a long history of inter-religious marriages and the legal and political background (such as the fact that there is no official state religion and no blasphemy or apostasy laws in place) was favourable to inter-faith coexistence. However, there were also threats to peaceful coexistence, such as cultural and sexual politics, the fact that religion was used as an instrument for political mobilisation, and the growing infiltration of Ugandan society and religious groups by right wing Evangelical radicals from the USA as well as by islamist radical movements from the Middle East. Furthermore, he explained that within Uganda there was a considerable fear of secularism and feminism, as they were perceived, according to him, as direct attacks on patriarchy which was the basis for religion. This, in turn, would lead to more radicalisation in order to protect the patriarchic structure of the Ugandan society.

In Ndebesa’s view, it was crucial to actively re-introduce a culture of tolerance to Ugandan religions, which could be done by including courses on peacebuilding and inter-religious dialogue in religious curricula. Furthermore, political actors in the country would have to refrain from using religion as a political tool, and in general there was need for critical resistance towards what Ndebesa called the “religious and cultural re-colonisation” of Uganda by US American and Arab groups and movements.

As the panel discussion began, some points for discussion turned out to be the major questions of the day. One of them was the rather basic question if there was religious radicalisation and tensions between different religions and denominations in Uganda at all. While Imam Kasozi negated that question, at least as far as different denominations of Islam are concerned, the other panellists agreed that religious radicalisation played a role in the Ugandan context. The panellists concurred on the theory that there were other forms of radicalisation, for example on the basis of ethnicity or race, tribal belonging, gender, and politics, which were closely connected to religious extremism and should therefore be an entry point to the prevention of radicalisation. Furthermore, the question if violent fundamentalism in its organised form was in its core about power, politics, or other interests, rather than about religion was heatedly discussed. While the panellists uniquely assented that religion was rather a tool for mobilisation and in its violent shape an abuse of the original religion, the audience took a more critical stand towards that idea. It became obvious in many contributions from the audience that the participants believed in the notion that some religions justify and preach violence in their original gospel – meaning that they were inherently violent. This, however, was examined carefully by the panellists and the keynote presenter, who explained that neither Islam nor Christianity were as such violent, at the same time protecting the people belonging to these religions from being put under general suspicion.

Dr. Ssali emphasised that the major question to which answers had to be sought when trying to prevent radicalisation in all its shapes was why people could coexist peacefully over centuries and then wake up one morning and decided that they can no longer tolerate people who belonged to a different religion. She explained that there were signs for that kind of development, for example in popular or folkloristic songs, in stories, and in the kind of legislation that is being passed. Prof. Dr. Nkurunziza stated that there were four questions which everybody should answer before acting or interacting: Am I liberal? Am I imposing my ideas on others? Am I tolerant? And finally: Am I humane?

These questions reflect the overall message which can be retrieved from the discussion: Uganda has the best chances of being a tolerant and religiously diverse society. However, some prerequisites for that were necessary for reaching that ideal. One of them was an educational system that transports liberal and democratic values and that enables Ugandans to think critically. Furthermore, the value of tolerance and coexistence would not only have to be taught, but also embraced by political and religious elites. Finally, religious curricula and teachings would have to include knowledge about other religions and embrace the common ground between their own and other faiths rather than portraying them as enemies or as fundamentally different. Through this, a positive image of faith and religion could be created which excludes violence and intolerance and instead makes it possible for believers to not only tolerate each other but take it one step further towards cooperation and friendship.

To the event
Presentation by Mwambutsya Ndebesa: Perspective on Uganda as a Multidenominational Society
Download 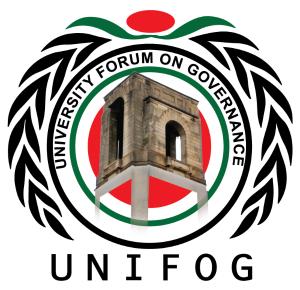 The dialogue was organised and implemented in cooperation with the University Forum on Governance.