On 15th September 2015, KAS in cooperation with the LéO Africa Forum hosted its fourth conference on the sustainable use of oil and gas in Uganda. This year’s conference, just like the one last year, was organized and implemented in cooperation with the LéO Africa Forum. The question that was deliberated on and sparked lively debates was that of mutually beneficial coexistence of the extractive industries sector with other sectors of the society, such as agriculture or tourism.
September 22, 2015 Ordering Information 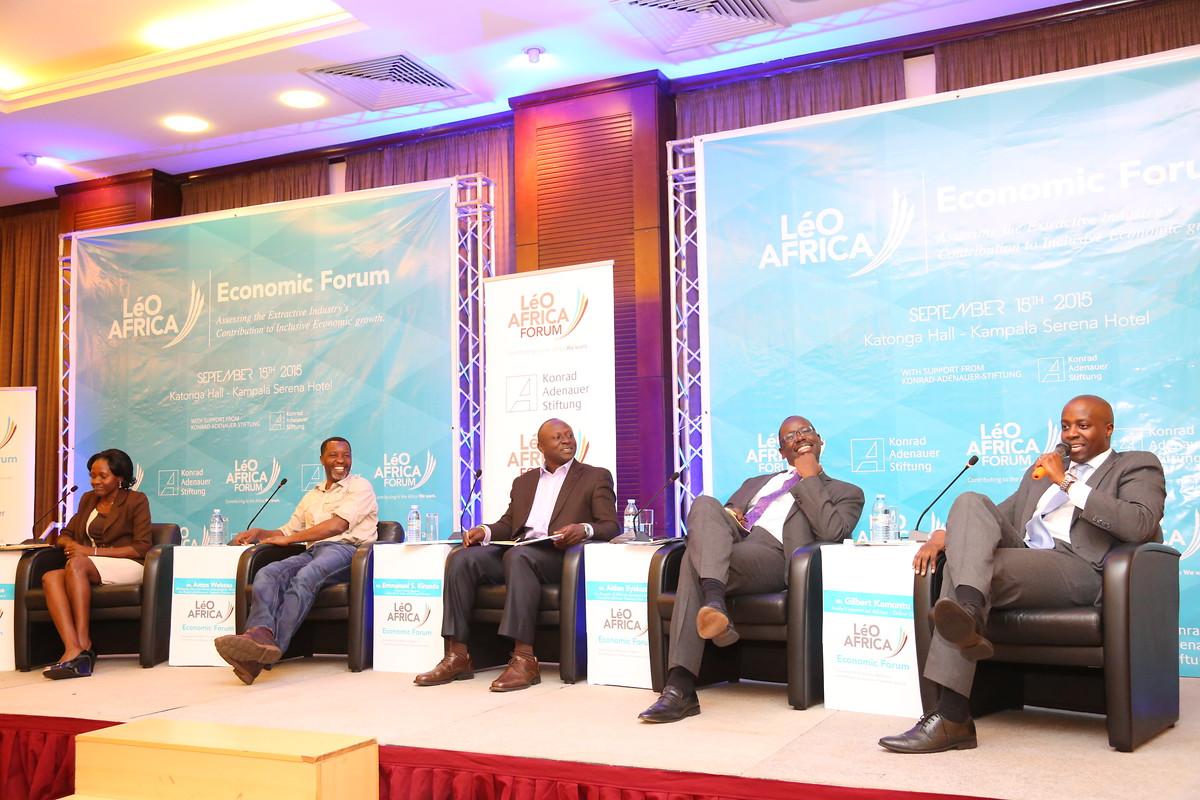 The panel with Irene Ssekanya, Amos Wekesa, the moderator Emmanuel Kirunda, Aidan Eyakuze, and Gilbert Kamuntu (from left to right) 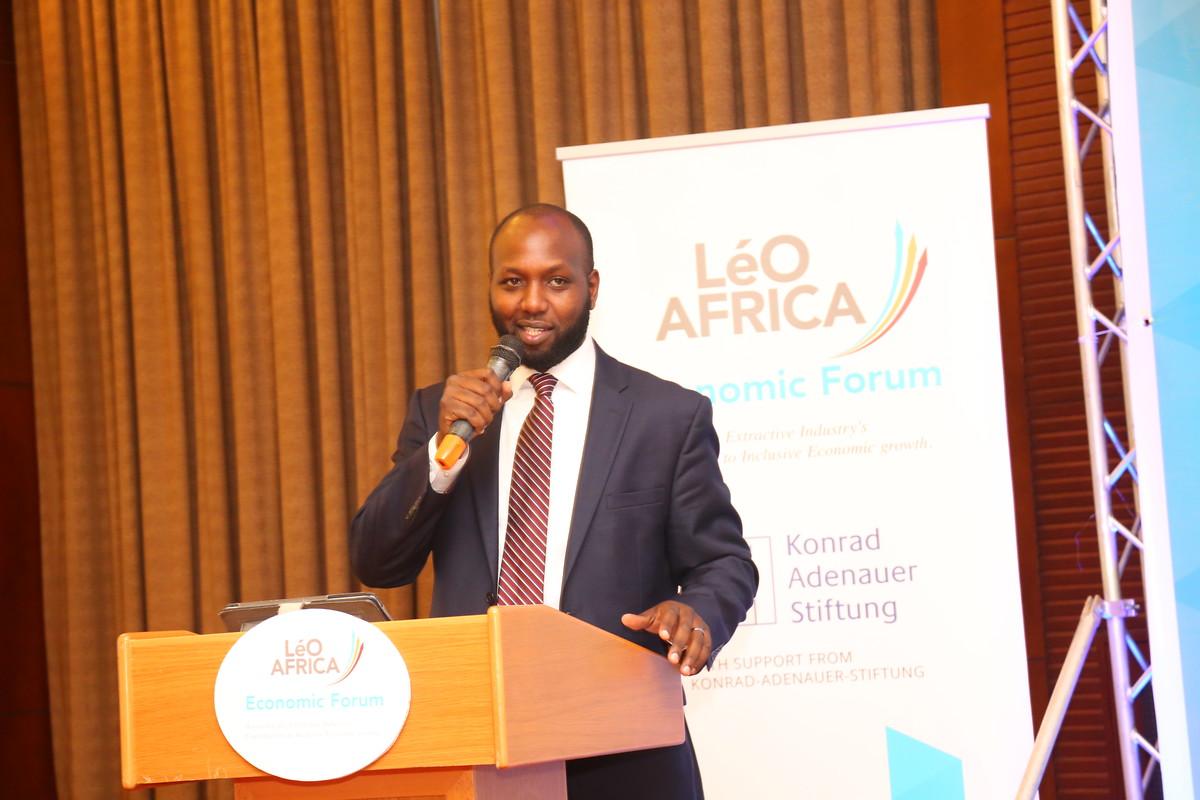 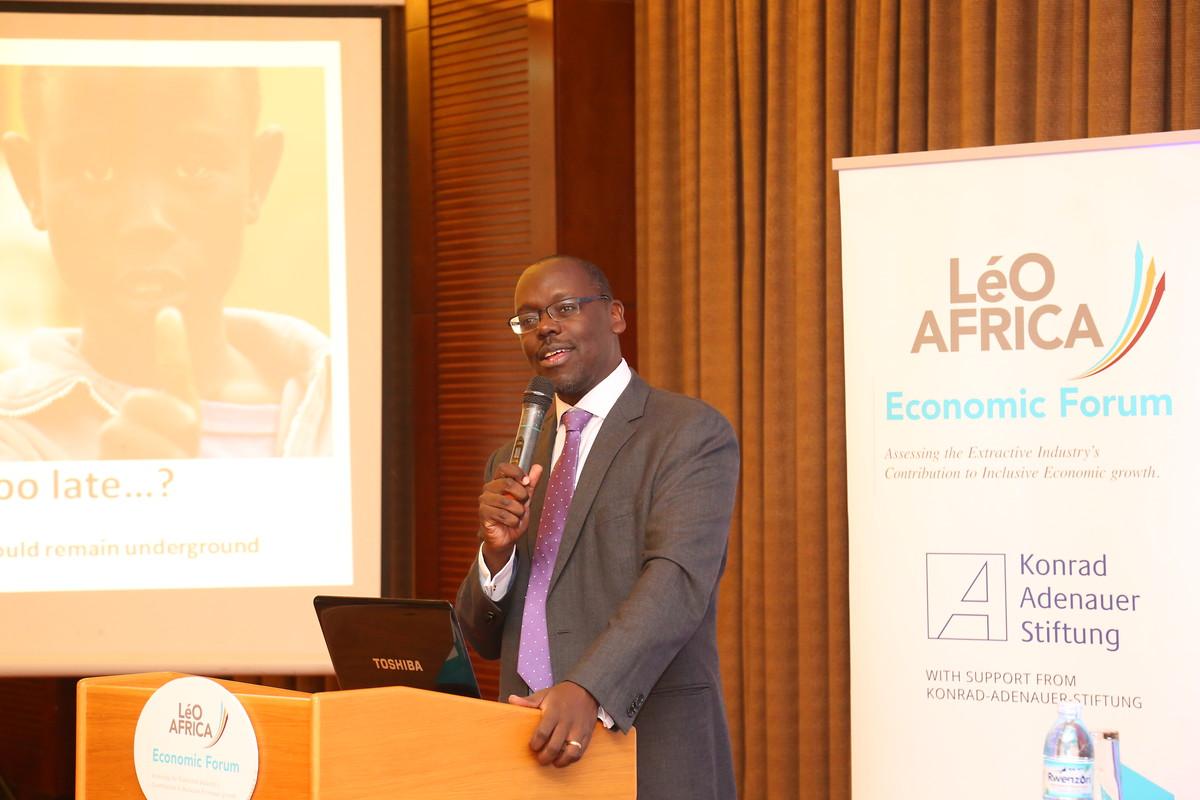 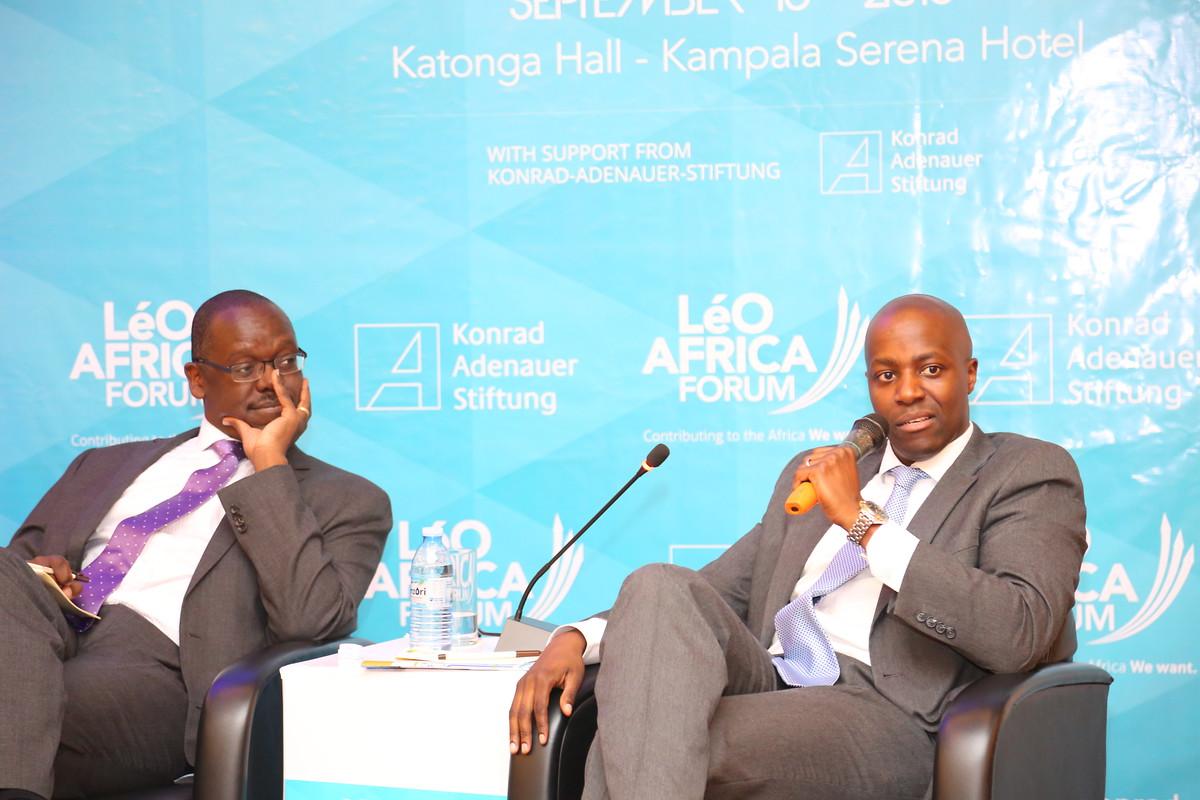 Gilbert Kamuntu, Senior Commercial Advisor of Tullow Oil, defines oil as a catalyst for development of other economic sectors. 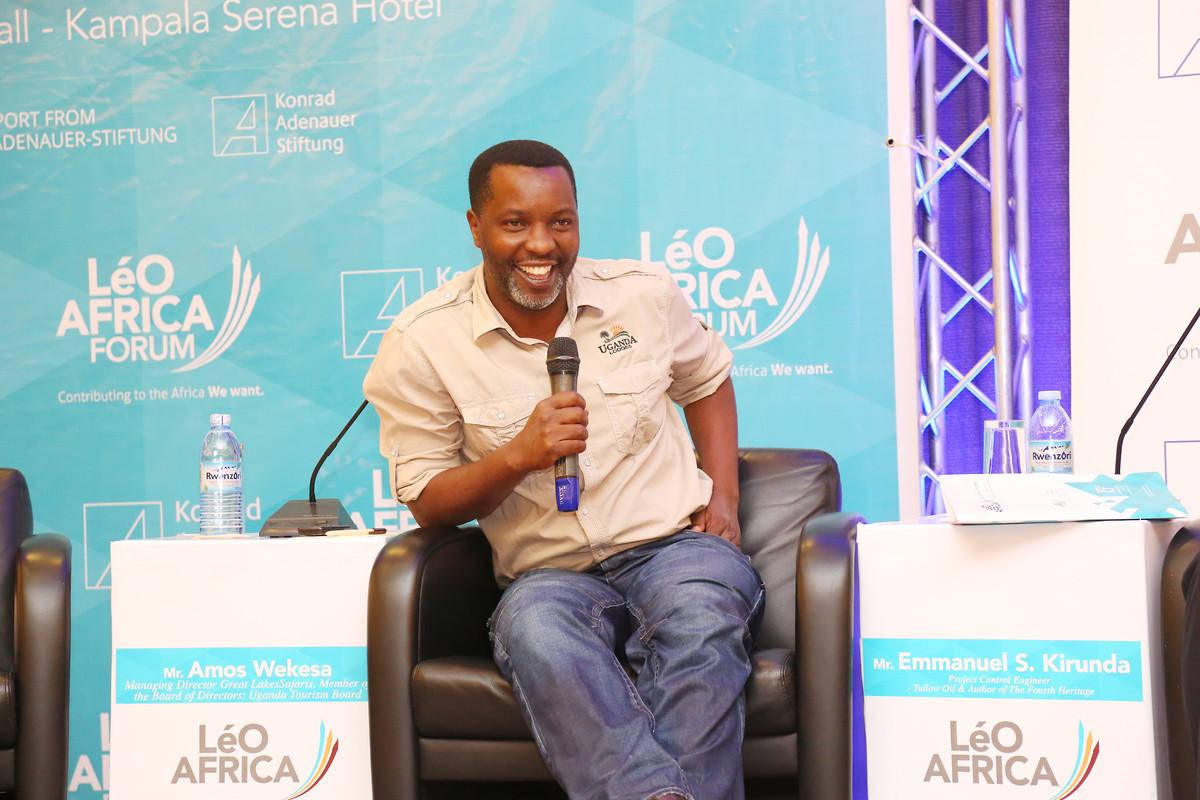 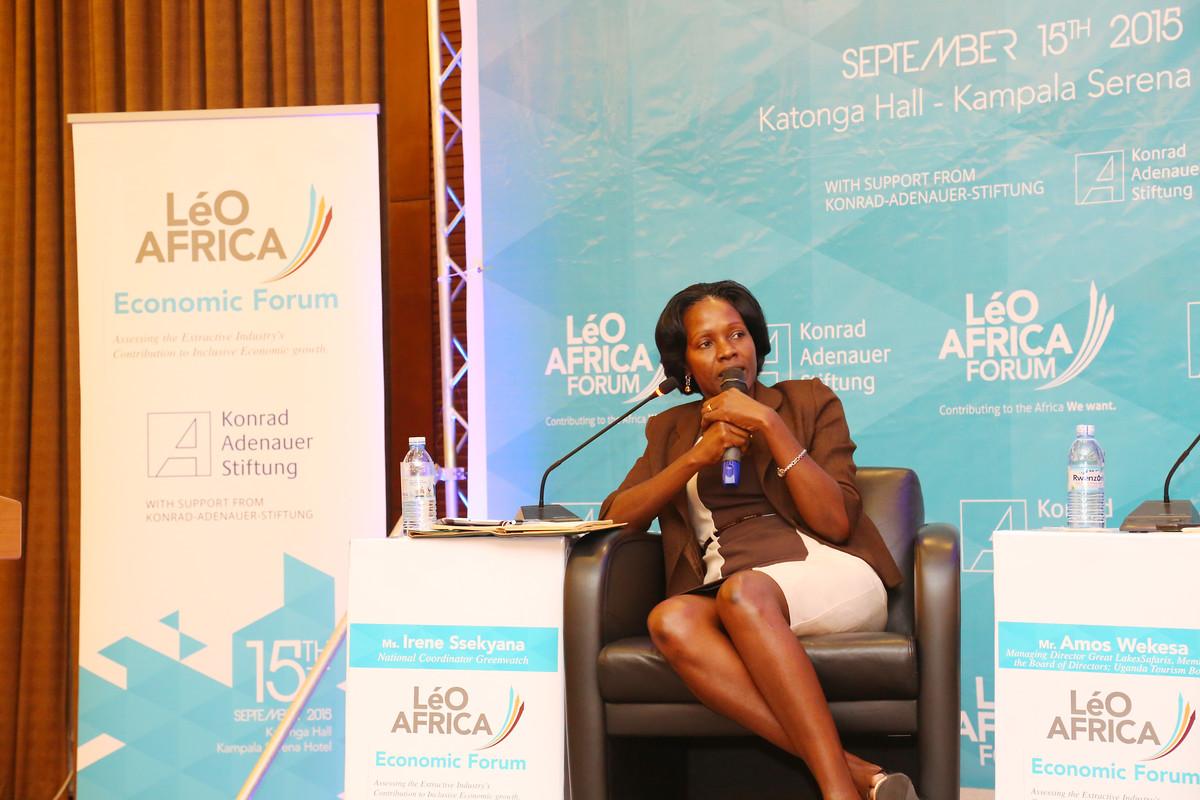 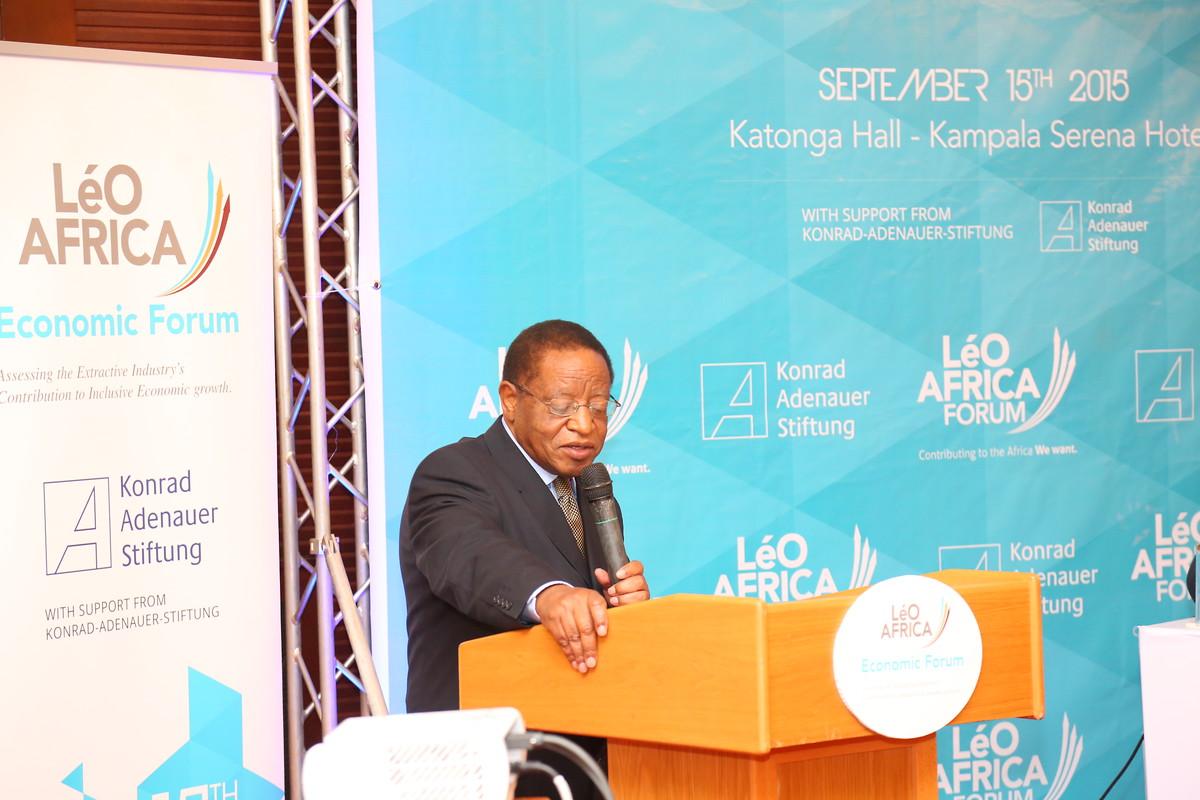 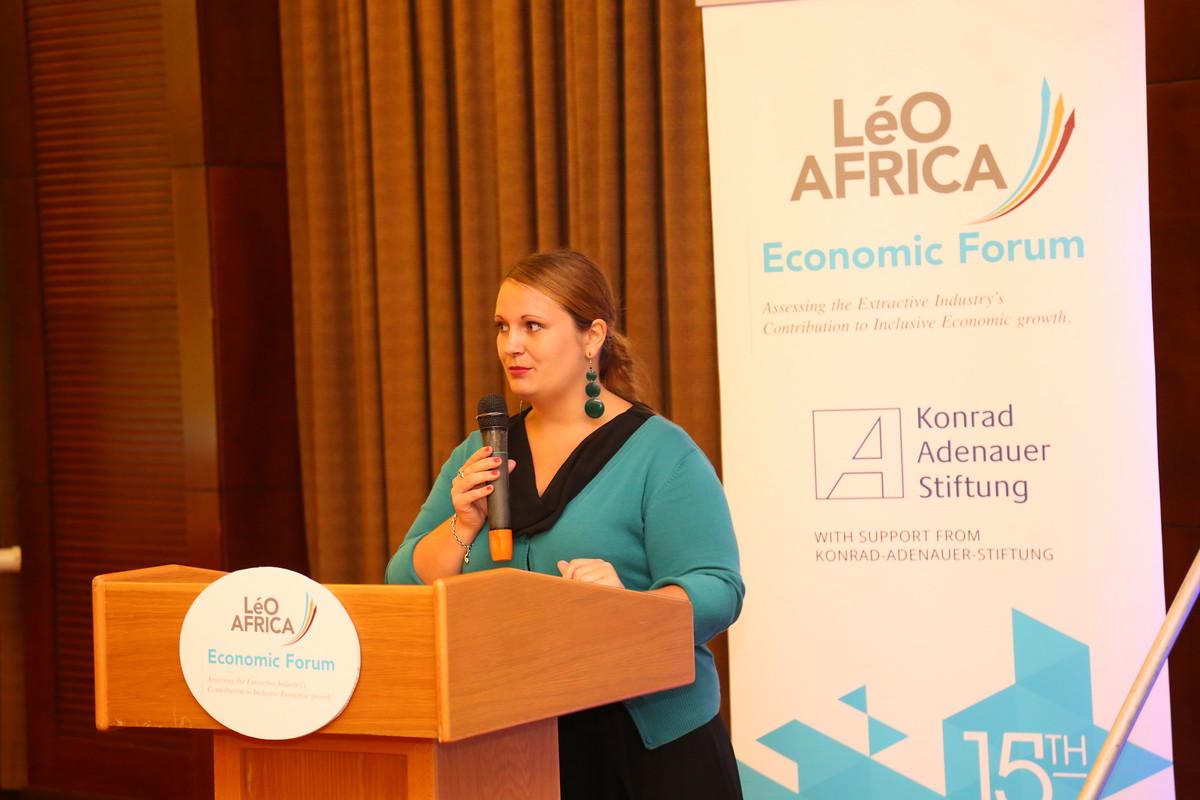 Maike Messerschmidt, KAS Programme Officer, gave a review of the previous discussions on oil and gas which KAS was involved in and closed the event.

As Uganda is still in the process of deliberating on how its natural resources can be best extracted, KAS Uganda and South Sudan has consistently brought together different stakeholders from government, the private sector, extractive industries, civil society, and state institutions. The purpose of these annual conferences is to share information and provide platforms for open exchange and dialogue. Whereas the first two conferences in 2012 and 2013 sought to provide the Ugandan discourse with best practices from Norway and Ghana, the conference in 2014 turned to the inside and focused on local ownership and content in the Ugandan oil and gas industry.

In 2015, the theme of the conference was “Opportunities in the Extractive Industries and Other Sectors of the Economy; Finding the Balance”. The questions that were discussed were on the one hand how the oil and gas sector would have to be regulated in order to not endanger other sectors of the economy, and on the other hand how it could be used to kickstart development and sustainable development.

The keynote presentation was given by Mr. Aidan Eyakuze, Co-Founder and Director of Serengeti Advisers and Executive Director of Twaweza East Africa. With his controversial presentation, he made a strong case for Uganda to not extract its oil resources but to leave them underground and focus on infrastructure and tourism instead. He claimed that the three assumptions that make it seem lucrative for governments to invest heavily in the oil and gas sector are not true.

The first assumption, according to him, was that oil is a scarce resource and that therefore the price of oil is and will remain high. However, he outlined that there are immense resources in the shape of gas in the world and with new technologies, such as fracking and horizontal drilling being developed and used, the supply of gas already exceeds the demand for gas and the countries that will be able to export gas in the near future – such as the USA – will permanently change the energy sector. Therefore, oil will become less and less relevant.

The second assumption Eyakuze rebutted was that the demand for oil is insatiable and therefore Uganda would never have problems exporting its gas. However, according to him, looking at the other players in the sector, such as Nigeria, Saudi Arabia, Qatar, Russia, and probably soon the US, the role Uganda plays in that sector is so minimal that investment in extractive industries in Uganda won’t be an attractive investment opportunity. Second, looking at environmental considerations, oil and gas will become less attractive with time and at some point the major focus will change on renewable energy.

The third assumption he mentioned was that Uganda would soon be “swimming in cash”. However, the borrowing of money in order to extract and produce oil and gas usually leaves the economy of the countries who engaged in such economic policies in serious trouble. As examples he mentioned Ghana and Tanzania, who are by now seriously indebted and face economic crises.

Based on these three assumptions and the facts Mr. Eyakuze provided, he then made the case for seeing oil not as an essential driver of the future prosperity of Uganda, but as an optional driver. He explained that strong investments in infrastructure would boost tourism and trade and would be better and more sustainable investments in the long run.

While Mr. Wekesa and Mrs. Ssekanya agreed that oil and gas production was receiving too much emphasis at the moment – at the cost of the environment and the tourism sector – Mr. Kamuntu made the case for oil being a catalyst for the development of the tourism and agriculture sector. The main concerns Mrs. Ssekanya mentioned were the lack of oversight of the oil sector, for example in the shape of missing environmental impact studies, and the extraction of oil in protected areas. Mr. Wekesa agreed that the tourism sector will suffer heavily from oil and gas being produced in national parks and explained that it would be much more sustainable to finally invest heavily in the tourism sector, as Uganda has for example excellent opportunities for safaris and bird watching, which are hardly known internationally.

Following the panel discussion was an open discussion with the audience, where mainly the question of how investment in infrastructure and tourism would be financed came up. However, the overall atmosphere during the conference was one of agreement with the advocates for tourism and infrastructure investment and the protection of the environment rather than only focusing on oil and gas production and hoping that it won’t affect other sectors so much that in the end they will suffer from it rather than being uplifted. 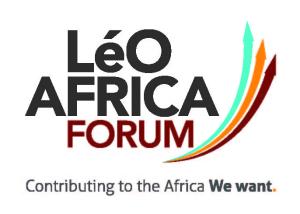