From 12th – 13th February, KAS together with the Directorate for National Guidance (DNG) conducted a training for district leaders in Masindi, in order to promote political pluralism and stronger collaboration among the appointed and elected leaders at the local government level.
February 19, 2018 Ordering Information 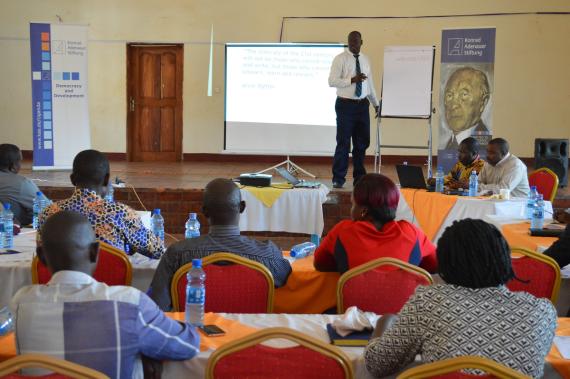 Since Uganda reestablished a multiparty system in 2005, KAS has been actively supporting a system focusing on good governance and strong democratic institutions, where all parties are heard and respected - already starting at the district level.

The number of politicians from the opposition occupying leading positions at district and national level has increased over the last years. However, many district leaders are not able to sufficiently fulfill their roles and deliver services to the society, due to their inability to collaborate and work together amongst their different roles. Despite the differences in political ideology and opinions, local government leaders still lack a common approach on how to effectively work together and set priorities within their departments. This is partly explained by the lack of appreciation of pluralism which is still in its infancy.

Therefore, KAS and the DNG have conducted continuous trainings for elected and appointed district leaders to sustainably strengthen democratic participation and to ensure the functioning of the different district departments in Uganda.

The main objective of the training is to equip current district leaders with the necessary knowledge and skills to fulfill their roles properly and to appreciate working with people of divergent opinions.

The first training of 2018 in Masindi was organized for the district leaders of Masindi, Bullisa and Kiryandongo including Residence District Commissioners, LCV chairpersons, sub county chiefs and women and youth leaders.

The training was facilitated by Dr. Milton Mutto who started with a brief introduction about civic education and its importance for promoting a strong democratic system. The interactive format allowed district leaders to openly discuss and ask questions about their work. By the end of the session the local leaders had gotten a better understanding on how their work actively contributes to the strengthening of Uganda as a democratic country.

A major focus was put on the importance of effective service delivery through knowing the width of the leader´s roles and responsibilities, more importantly through collaboration among each other. The laws of Uganda do not cover certain requirements of knowledge and skills district leaders have to come with. Thus, many district leaders are not yet well aware of their particular roles and lack competences in setting priorities causing major consequences for the wellbeing of their electorate.

The challenge of failing to deliver services effectively are mainly rooted in the disrespect between parties for their different political views and opinions which leads to disagreement on important decision making and hinders the development of the district. “To effectively deliver services to the communities and embrace a system of multipartyism, appointed and elected leaders have to collaborate and overcome their bias against the other party” – as Dr. Mutto concluded.

Besides an interactive training, the program was complemented by Kim Jim from South Korea, who facilitated a session about the change of the mind-set. “The Ugandan society first has to change their mind-set on how they see their own country, in order to bring positive change.” Using South Korea as an example which was once seen as one of the least developed countries after suffering from tremendous wars, Kim Jim highlighted the importance of a change of mind-set for a country´s development. Changing the mind-set of South Korea, especially of its youth, enabled the country to slide out of the high poverty-rate and to become the 13th strongest economy in the world. Thus, Uganda needs a change of mind-set whereby people start appreciating every aspect of life and focus on the strengths of the country instead of looking at the weaknesses and challenges. “A change of mind-set can be highly beneficiary for Uganda´s development in the long run”, as Jim Kim concluded.

The training was attended by high representatives from different political sectors, leaving a strong impact on the participants by also showing their presence and support in districts like Masindi. Simon Mayende, Director of Information & National Guidance closed the program with a powerful speech about the importance of highly committed district leaders to shape Uganda into a strong democracy. Throughout the program, participants continuously expressed the necessity for such trainings in which they receive clarity and understanding of their functions as district leaders and gain respect for each others opinion. 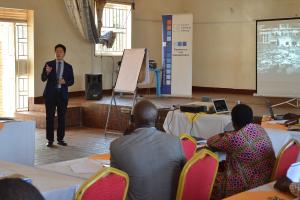 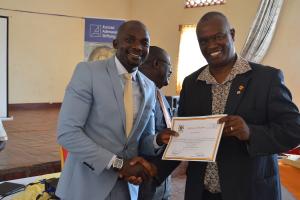