Promoting responsible citizenship, pluralism and cooperation regardless of political affiliation

The Directorate of National Guidance (DNG)in partnership with KAS trained 35 local government leaders from Tororo, Busia and Butajela on effectively collaborating in a multiparty-system at local level, with special emphasis on responsible citizenship, civic education and citizen engagement to guarantee efficient service delivery. Aware of the fact that multipartyism is still relatively new in Uganda, the concept lacks appreciation, especially at the local level – leaders therefore need to be oriented towards the key tenets of democracy and pluralism
August 22, 2016 Ordering Information 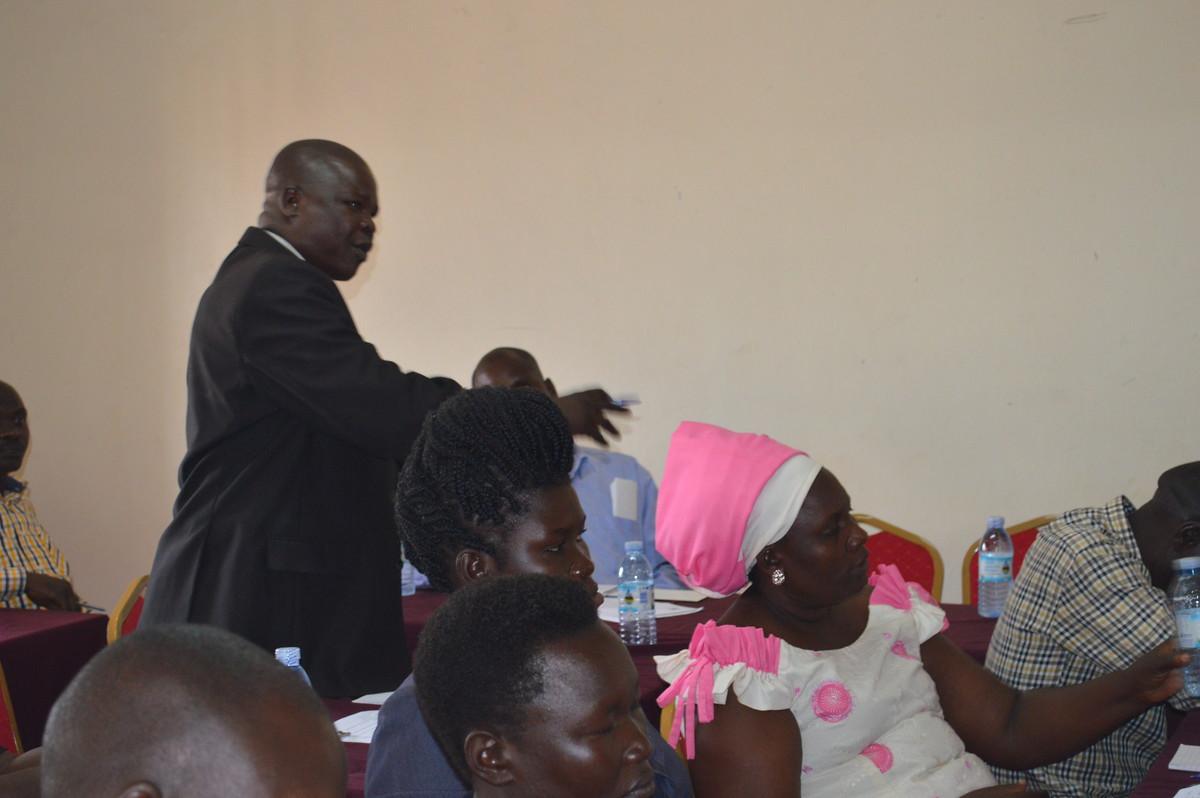 For the third time in 2016 we have partnered with the Directorate of National Guidance (DNG) to train 35 local government leaders hailing from the Tororo, Busia and Butajela on effectively collaborating in a multiparty-system at local level, with special emphasis on responsible citizenship, civic education and citizen engagement to guarantee efficient service delivery. Aware of the fact that multipartyism is still relatively new in Uganda, the concept lacks appreciation, especially at the local level – leaders therefore need to be oriented towards the key tenets of democracy and pluralism.

Even though Uganda is a multiparty democracy, political parties had been in abeyance for many decades and a culture of political pluralism is still lacking in multiple locations. Most districts in Uganda have both opposition and ruling NRM councilors as well as appointed leaders - however, fruitful cooperation is frequently overshadowed by mistrust and rivalry, especially at the local level. The shaky working relationship between the opposition and the NRM sometimes stifles the smooth service delivery at the local level. The Directorate of National Guidance, together with KAS, therefore initiated the third of three workshops to train elected and appointed leaders to cooperate in a multiparty-system, despite their differences in political ideology and affiliation.

The event was organised and fully financed by the Konrad-Adenauer-Stiftung (KAS) Uganda and South Sudan in partnership with the Directorate of National Guidance (DNG) and targeted both appointed and elected leaders at the local level, including Resident District Commissioners, LCV and LC 3 chairpersons, Sub county Chiefs, Community Development Officers, Chief Administrative Officers, Women and Youth Leaders, hailing from the Tororo, Busia and Butaleja districts respectively.

Dr. Milton Mutto held an interactive presentation on the importance of civic education and its role in the process of nation-building. During this session, he emphasized what for him was the essence of this workshop: to learn how to reflect on one’s own actions and thoughts critically. Dr. Mutto presented the essentials of nation-building as a continuous process created through deliberate actions by responsible citizens. Subsequently, he referred on the concept of democracy, its basic principles, conditions and benefits for the society. The presentation’s content was both descriptive, explaining to the participants what elected and appointed leaders actually do, what their roles and what their needs are, as well as normative, stressing the benefits of collaborating despite all ideological and political differences in order to guarantee effective service delivery.

Oroch Martin, the Resident District Commissioner (RDC) of Tororo, lectured on the duties of each citizen according to the national constitution of Uganda and linked the leaders’ individual roles within the bigger whole to the realization of the “Vision 40”, recently published by the Ugandan government.

Sango Richard spoke to the participants about Responsible Citizenship and the Common Good. Starting from the current challenges Uganda faces – an extremely young, but increasingly frustrated and passive population – he pointed out the possible solutions to these problems, namely a deliberate public education and a responsible and active role as local leaders to comply with their role within the bigger picture. Hereafter, Mr. Sango enlarged upon the common goods of Uganda and raised the question if the citizens of Uganda are actually protecting those goods.

Mr. Joal Wanjala posed the provocative question of what actually makes the difference between rich, developed nations and developing countries like Uganda. Concluding on an active plenary discussion, he stated that the one thing that makes the difference is the peoples’ mind-set, their attitude towards responsible citizenship, caused by a difference in civic education. From there, Mr. Wanjala continued to explain the concept of good governance and its key principles.

KAS emphasized that responsible citizenship needs to go much further than paying taxes or participating at elections: “Think about deliberate actions you can actively take in your districts. Even through the smallest steps towards improving your community you are playing your role as units of a whole” (Bernard Mukhone).

There was high interest from the participants who actively participated during all the sessions. The workshop successfully created awareness about the concepts of democracy and political pluralism among the district leaders, enabled them to work together cooperatively in a multiparty environment, created ability to identify priorities for the districts and raised awareness about the role of civic education in successful nation-building. 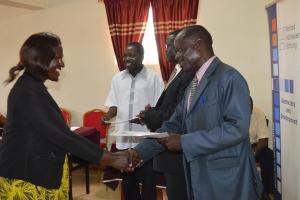 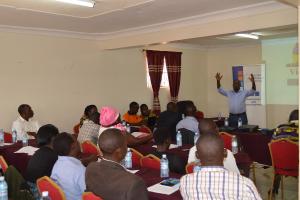 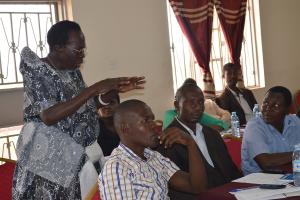 LC 3 chairperson giving an example of her sub county 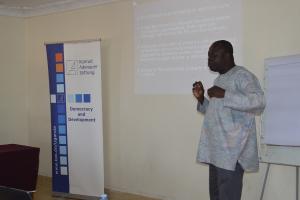 Dr. Mutto during the training session