A roundtable conversation held at Golden Tulip Hotel was aimed at stimulating discussions in linking the principles of a Social Market Economy to the implementation of the National Green Growth strategy in Uganda. The discussion included policy makers, representatives from the private sector, government, CSOs, as well as academicians.
October 16, 2017 Ordering Information

He noted that Uganda among other things aspires to greatly improve a green economy with a clean environment, a sustainably managed ecosystem and the live ability of urban systems. According to Mr. Kaggwa, this will require an inclusive low emissions economic growth process that emphasizes effective and efficient use of the country’s natural, human and physical capital while ensuring that natural assets continue to provide for present and future generations. He also noted that green economy has to be considered in the context of sustainable development and poverty reduction, enhance social inclusion and improve human welfare.

The natural capital base is declining, for example, the forest cover declined from 24% in 1990 to 8% and the Wetland cover from 13% to currently 8-9%. There are also high levels of unemployment, especially youth unemployment, high income inequalities, regional imbalances, vulnerability to the adverse impacts of climate change, persistence of vulnerability and slowdown in economic growth (3.9% in last two years) are among the reasons why green growth strategy is handy for Uganda. Mr. Kaggwa observed that the conventional growth model may deliver Uganda to a middle-income status, but it will compound existing vulnerabilities, for example, regional imbalances, unemployment and environmental degradation and threaten the sustainability of development in the country.

Implementing green growth according to Mr. Kaggwa can generate 4 million jobs, spur economic activity worth 10% of GDP by 2040 and the short term benefits could boost GDP by 10% by 2020 (an additional income of US$ 3.4 billion). It could as well reduce Green House Gasses emissions by 28%. However, he noted that for green growth strategy to be effective there has to be a number of reforms. In other words, green growth has the potential of triple win that is economic growth, social wellbeing and environmental protection. However; he noted that this will depend on the governance in the country.

It was also noted in the discussion that the liberal development approach of green growth has been left in the hands of capitalist, who have used it to the detriment of the population. The example cited here is green growth grabbing where people have been displaced to pave way for planting trees. It was also noted that some of the trees planted such as eucalyptus cause more harm especially to arable land.

Participants as well as panelists agreed that unless there is proper coordination among the different agencies, it will be hard for Uganda to achieve a green economy. First they highlighted the gaps between policies and implementation, second the wide gaps between the state implementation agencies as well as disconnect between the CSOs, the private sector and the government. They also noted the need for policies that will bring people at the center of the green growth movement otherwise green cover will continue to be cleared by the population in search for survival. They also called for the need to involve other institutions like religious and solidaristic organizations. 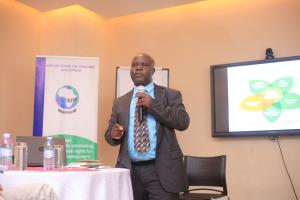 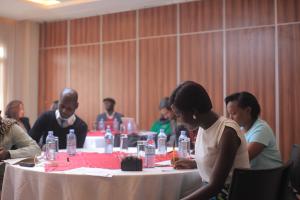 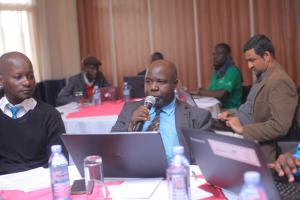 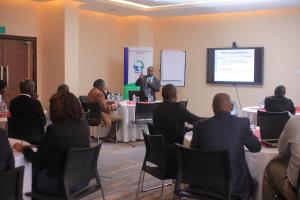