Public Dialogue and Workshop in Kasese

Journalists from Kasese and the surrounding districts met for a public dialogue followed by a three-day workshop to discuss the role of journalists as bearers and promoters of human rights. The lively discussion about the freedom of the press in Uganda between different stakeholders during the dialogue provided a starting point for the subsequent workshop. Journalists participating in the workshopwere trained in reporting about human rights after a theoretical briefing about investigative journalism and the concept of human rights.
April 1, 2011 Ordering Information

Both the public dialogue and the workshop which took place in Kasese in Western Uganda were organised by the Konrad-Adenauer-Stiftung (KAS) in cooperation with Uganda Media Development Foundation (UMDF) and the financial support of the German International Cooperation (GIZ). The dialogue emphasised the local perspective of different stakeholders regarding the freedom of the press in Uganda. Representatives from the media, politics, police, church and civil society actively discussed their different views on local challenges for a free press.

Arguments were brought in by journalists that the police doesn´t provide the required information and that the Chief Administrative Officer, as the official spokesman of the district, is often not available. In addition they complained about their small payment which sometimes leads to faked stories and unprofessional journalism. Without money the quality of their stories cannot be assured. In response policemen accused journalists for a bad representation of the government and the police in the media. The news coverage would concentrate only on negative aspects and ignore the achievements of the government. Politicians were complaining that the information is not always presented in the way as it was given by authorities and therefore the media ruins their reputation. Especially Hon. Rev. Can. Julius Kithaghenda, the district council chairman of Kasese, appealed for more support of the government. People should ask themselves how they can support the NRM instead of complaining about it. Therefore the journalists shouldn´t report wrong stories and verify their information before they publish them. On the other hand politicians and other interview partners have to provide the right information and in the opinion of the chairman they journalists should be facilitated better in order to get right information.

In this context the quality of journalism was highly discussed by the 45 participants. Professionalism, scientific measures and objectivity of journalism were highly demanded. The media was criticised for being uncritical, speculative and one-sided. Bishop Rt. Rev. Jackson Nzerebende Thembo noted that the media was state focused and left out the private sector, especially the church. He himself wouldn’t get interviewed. Furthermore it was criticised that Uganda´s population is not politically conscious and cautious enough. People should make use of their right to information. However, participants agreed on the fact that it is the journalists’ duty to inform the country.

In order to improve the quality in journalism 17 journalists attended the following three-day workshop from 30th of March to 1st of April 2011. Under the topic “Strengthening Journalists as Bearers and Promoters of Human Rights in Uganda” the workshop aimed, amongst others, to apply a human rights based approach in journalism and the related techniques. Starting with a theoretical basis for understanding human rights, an introductory presentation put the issue firstly in an international context by presenting the definition, history, instruments and concept of human rights and secondly in a domestic context by observing human rights under the Ugandan Constitution and analysing Chapter 4. In group work the participants were brainstorming about questions like: how are human rights protected and enforced in Uganda? Or who are the main victims? As protectors the journalists mentioned for example the constitution, political institutions, courts, the police and the media whereas employees, children and disabled were classified as victims.

After the theoretical briefing journalists faced the task to produce persuasive in-depth human rights stories for the print and the broadcast media. For the practical field work the participants set up three groups and went to town in order to record interviews with selected target groups. Despite some technical problems during the recording process all three groups were able to present their recorded story on the next day. With the help of key attributes which should be addressed the stories were analysed and discussed. It was criticised that all three stories lacked a conclusion as well as an intro of the story. Furthermore the particular human rights which were abused in the stories had to be defined and solutions should be presented. Nevertheless the stories reached a high qualitative level which would allow a publication.

During the final discussion the roles of journalists, media houses, civil society and state authorities in regard to the challenges for human rights reporting in Uganda were approached. Thereby the duty of journalists to report about human rights and their role as watchdogs and observers were clearly pointed out. As key results of the workshop the participants should have reached a higher confidence level to report about human rights and should also be more interested in related issues. The training provided a basis for journalists to promote and protect human rights by sensitising the participants on the topic and the required qualitative reporting skills.

Journalists as Bearers and Promoters of Human Rights 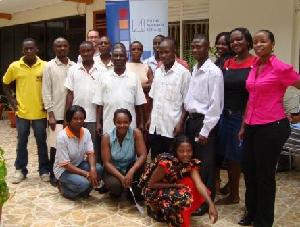 Participants of the Workshop for Journalists in Kasese