REFLECTIONS ON RECOVERY IN NORTHERN UGANDA

April 2018 would mark fifteen years since the commencement of the Kabake community radio programme. Uniquely, this radio programme has been consistently supported by the Konrad-Adenauer-Stiftung for all these years singlehandedly making it the longest most sponsored radio programme in Uganda.
May 7, 2018 Ordering Information 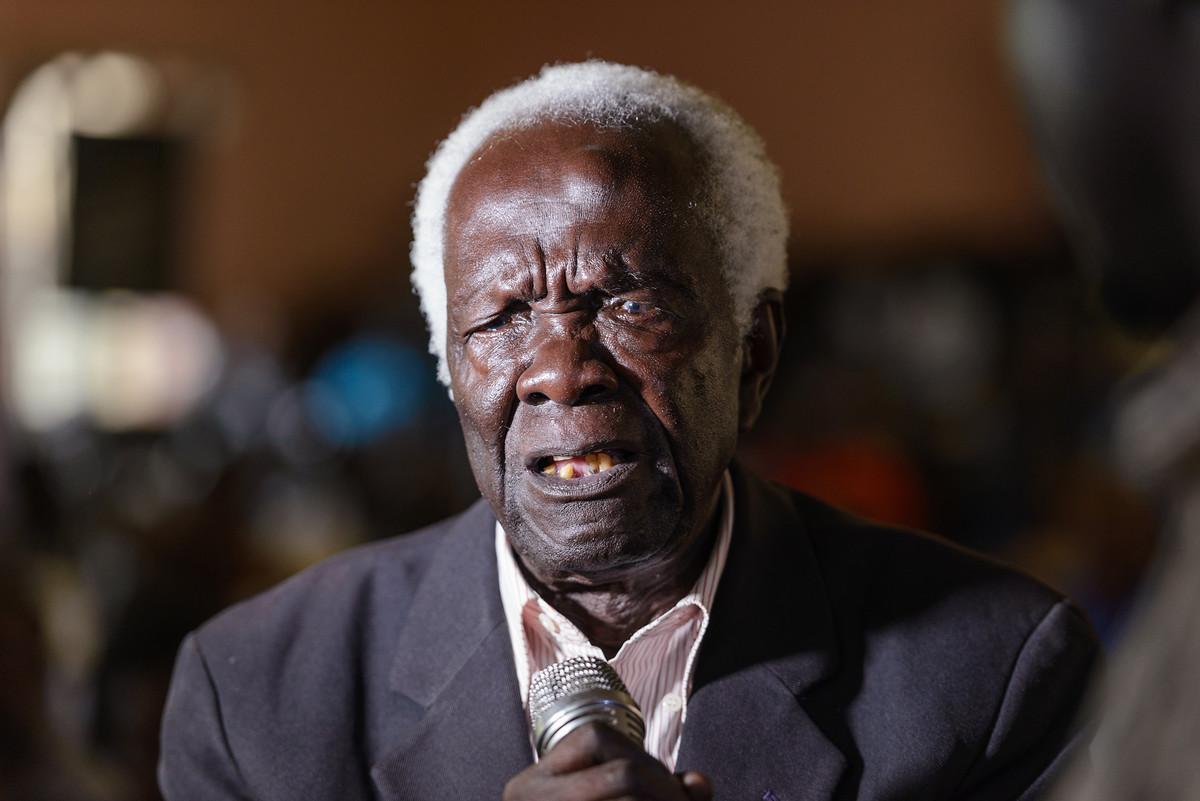 Started in April 2003, at the peak of the LRA Conflict in Northern Uganda, Kabake continues to be a household name radio programme. Every Sunday from 10-11am, thousands of Northern Ugandans tune in to 102 MegaFM, the oldest radio station in Acholi sub-region to listen to organic community voices debating and reflecting on issues that matter to them most. What the community radio programme was started, the communication infrastructure in Northern Uganda was almost non-existent. The incessant rebel attacks made it impossible for stories to be reported by journalists. What ensued was a complete media neglect of the region. But Kabake radio programme offered some flickers of hope as communities gathered together to dialogue and air their views as well as venting their angers and frustrations.

Asked to reflect about Kabake community radio programme, Ojara Mapenduzi who is one of the founders of the programme and the current LC5 Chairperson of Gulu clearly articulated the relevance of the programme as follows: “The start of Kabake brought out not only the voice of the voiceless but also the great Acholi oratory skill. I still remember the eloquence, passion, frankness and courage with which the members spoke when we started this community dialogue programme. In fact, the start of Kabake was a technical knock out to the silence and lack of opportunity for the population to air out their voice especially on matters that concerned society. In fact, majority of those who started later on became community leaders, some of them going to parliament and others local government and I am a living testimony. Basically, the community talked about the development & rehabilitation of northern Uganda in the post war recovery & this supported the leadership in decision making”

April 2018 would mark fifteen years since the commencement of the Kabake community radio programme. Uniquely, this radio programme has been consistently supported by the Konrad-Adenauer-Stiftung for all these years singlehandedly making it the longest most sponsored radio programme in Uganda. But why would a political foundation offer support to a radio station to carry out community radio dialogue in such a consistent manner for more than a decade? According to the KAS country director, this is because “access to and utilization of information is the lifeline of any democratic society. In fact, an informed citizenry holds their leaders accountable and easily finds solutions to their problems”

To commemorate this silver jubilee milestone, a full day event was organized in Gulu town to bring together different stakeholders to celebrate the achievements thus far whilst also taking note of the challenges and rethinking how to shape the future of the radio programme.

Held at Gulu District Council Hall, the commemoration attracted 400 guests, most of whom individuals who participated immensely in the initial and later Kabake community dialogues. Attendees travelled from as far as Karuma, a unique historical location which housed thousands of IDPs during the conflict in Northern Uganda. As reiterated by one guest from Karuma, “I had to be here today. Kabake brought us together when all seemed impossible. The dialogues were refreshing, insightful and a source of inspiration and hope”. Other key guests were leaders from the religious, political, and civil society sectors in Acholi sub-region.

To kick-start the event, the regular Kabake community dialogue was organized where 200 participants attended and aired out their views. The session was moderated by Innocent Aloyo, a veteran journalist whose name is synonymous with Kabake radio programme since she has been facilitating the community dialogues from its commencement. With its usual democratic and empowering approach, the participants present suggested a number of topics to discuss ranging from girl child education, road construction to bride price and women’s economic empowerment.

Crucial to the design of the of the Kabake dialogue is the need to comprehensively debate a subject – usually a community challenge and come up with relevant and feasible ideas to address such challenges. At the silver jubilee anniversary, the enthusiastic folks gather voted to discuss the ever controversial subject of bride wealth. Should it still be paid by the groom to the bride’s family? Or not? What relevance is it to today’s modern world? What about its cultural significance? Has it been commercialised? Why should some women be valued higher than others? These questions and more were the compasses for guiding the morning discussions. The selection of this topic was important because it is directly tied to girl child education, gender equality and human rights which are key pillars of development and targets of the sustainable development goals.

The Kabake community dialogue session was heated, critical and insightful. The debaters echoed crucial points which both supported and dispelled the case for bride wealth. The proponents insisted that bride price is good because it is part of cultural identity. Similarly, bride wealth the supporters said is part of the return on investment to the bride’s family for raising and upbringing the women as one participant expressed, “If I raised my daughter well, paid her in school and you come to marry her, come well prepared because I will charge you highly”. Another participant provocatively asked, “If I paid my daughter’s school fees up to the university, which stupid man would offer a small dowry?”

Opponents reiterated that bride wealth is leading to the proliferation of unmarried couples because most times, the cost are so high, making it impossible for the youth to afford. This is further compounded by the high levels of youth unemployment in the region, they argued.

The debate was important for key reflections on the relevance of dowry in contemporary Acholi land. The debate was concluded with a common understanding that bride price in itself isn’t bad since it promote cultural identity and enhances community cohesions, harmony and peace. The dialogue also created a unique platform for people to appreciate that bride pricing should be a commercial venture, but rather a token of appreciation to the bride’s family. As one elder concluded, “if young men are given the opportunity to offer what they can afford, we will see a hike in marriages which is very healthy for the functioning of our society”.

The hallmark of the Kabake@15 commemoration was the afternoon public dialogue that offered participants the opportunity to reflect on the reconstruction in Northern Uganda, a region ravaged by civil strife and guerilla warfare for more than three decades. The platform discussed whether the silence of the guns in the region actually translates to total stability in a region. This was especially relevant considering the fact that the Northern region is not only the region with the highest national poverty level scores but it is an expanse where rural youth unemployment is soaring; where health and education standards and infrastructures are appalling, where girl child education and literacy rates are lowest among other development challenges.

The keynote address by Nicholas Opiyo, a renowned human rights advocate, himself a fervent follower of the programme was key to lay a solid foundation for the ensuing panel and plenary discussion. In his address, Nicholas emphasised that the development of Northern Uganda will continue remaining a farfetched dream if certain basics are not addressed. The basics, Nicholas emphasised are hinged on getting the education right; ensuring equal access to opportunities, especially for women who have traditionally been recipients of injustices; creating expansive employment opportunities, especially for the youth.

Nicholas also consistently called upon the need to seriously reflect upon development programmes in Northern Uganda by government and development partners. “This reflection is important because we know that the multiple programmes implemented in the region have not done much to uplift the region from abject poverty. In fact, the gun has gone silent but there isn’t really absolute peace in Northern Uganda”. This critical reflection is important “because it will enable us to undo the failures and progress positively to a better future” he noted.

Nicholas also applauded the programme for fomenting the creation of a new breed of leaders in Northern. “From names like Ojara Mapenduzi, the current LC5 Chairman of Gulu District to Lyandro Komakech, the current MP for Gulu Municipality, these leaders used Kabake as a pedestal to nurture their public engagement and communication capabilities, facets which are key to political leadership” he remarked.

Indeed, Lyando Komakech, the area MP who was also a panel discussant confirmed that Kabake was and stills remains a key pillar of his political career. He used the commemoration platform to give an account of his performance as the MP of Gulu Municipality. Later, voters engaged him in a heated but constructive Q&A session. From the questions and interactions, many ordinary citizens expressed a sense of dissatisfaction with the performance of their leaders. One angry participant asked the MP, “how do we vote for our leaders and they do so little to averse our plight?”

To the disenfranchised audience, Mr. Komakech meticulously articulated the intricacies and realities of high level politics and policy, emphasising that MPs play many roles including drafting and contributing to policies at the national level not just to address problems affecting the constituencies they come from. But he also called upon all the political leaders from Acholi to work together more effectively to address the plethora of development challenges that continue to riddle the region. He also called upon the government to stop offering lip service to Northern Uganda because the problems that the region is facing require a concerted effort by all stakeholders involved.

In her address meanwhile, Cinderella Anena, a youth development advocate, stressed the importance of young people engaging in productive economic activities. Anena noted that the lives of youth in post-conflict Northern Uganda are being ruined by alcoholism, unemployment and poverty. She called upon leaders to whatever is in their power to address their challenges because not doing so is more problematic as young people will turn their vibrancy and vigor to destructive activities like theft, crime and prostitution among others.

Among the panel discussants was also Bishop McBaker Ochola, a clergyman whose relentless efforts in peace negotiations during the insurgency was clearly significant. The Bishop Emeritus of Kitgum Archdeaconry called upon Northern Uganda to protect and conserve the environment, failure of which is not only a looming but existential catastrophe. “The threats of climate change are more calamitous than the decades of war meted on us by the LRA. If we do nothing now, the future generations will inherit a destroyed planet with little productive capabilities”, Bishop Ochola warned.

Indeed, the robustness of the Kabake debates continues to be refreshing. It still continues to provide a platform where people are put the feet of their leaders on fire as noted by Nicholas Opiyo. The community radio program greatly contributed towards the pacification and rebuilding of Northern Uganda and best still, there are now deliberate efforts by both various stakeholder to continue supporting and using Kabake to bridge the gap between citizens and leaders in Northern Uganda.

To end line of the #KabakeAt15 commemoration was a special dinner with senior political, religious and civil society leaders from Acholi sub region. Among the distinguished guests at the dinner were Nobert Mao, DP party president, Arthor Larok, ActionAid Regional Director, Ojara Mapenduzi, the Gulu LC5 Chairperson among others. In his statement, President Mao extended his heartfelt gratitude to KAS and MegaFM for consistently running the programme and to Innocent Aloyo, the show host for always doing what she does best – organizing and facilitating the Kabake community dialogues. 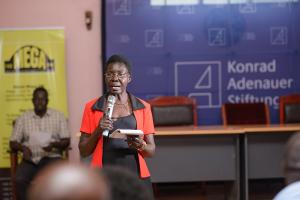 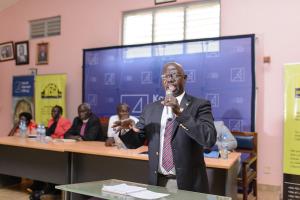 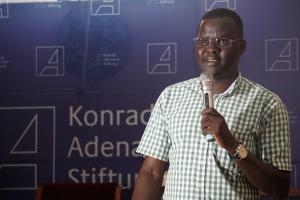 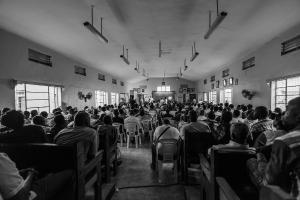