7th Aug 2018 marks an historical epoch in South Sudan’s history. Dozens, including warring factions both from government and opposition signed a peace agreement at the Friendship Hall in Khartoum with Presidents Museveni of Uganda and Omar Al Bashir of Sudan as guarantors.
August 27, 2018 Ordering Information 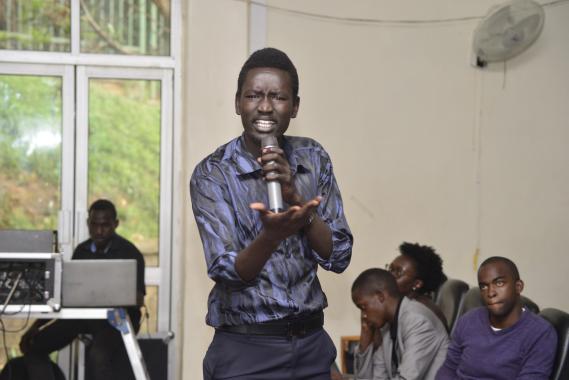 In light of this newly signed agreement, the University Forum on Governance (UNIFOG) and the Network of South Sudanese Civil Society Organizations in Uganda (NoSSCOU), the Konrad Adenauer Stiftung (KAS) facilitated a public dialogue on the 24th of August at the Makerere University to explore the opportunities for making the new peace deal work.

The event began with the anticipated opening remarks of SPLM-IO representative in Uganda, Mr. Luke Thompson Thaong. He stated that the agreement is not yet a complete solution, but rather a first step towards peace: “These two signed protocols in itself do not address the conflict itself. But they are opening doors for the conflicting parties to engage in further dialogue.” Thaong moreover outlined the conditions of a successful implementation of the new agreement: “Some of the prerequisites of the success of the agreement include: Security sector reform to facilitate an inclusive professional army and the promulgation of the Constitution before the end of the transition instituting federal governments.”

After the opening remarks, another anticipated speaker entered the stage for his keynote address: Professor Mahmood Mamdani. Mamdani stated that the new agreement marked a major turning point in the history of the South Sudanese conflict, because of two major reasons: First of all, the agreement came into being without force and secondly, in contrast to the previous agreements, Sudan was part of the solution and facilitated the negotiations.

“The agreement stands for a remarkable turnaround from the CPA. Sudan is part of the solution. It presents the rehabilitation of Bashir and South Sudan. What else is the difference in the new agreement? This time there was no force. All past agreements failed, because there was force. Because of this Sudan had no reason to support the agreement. So this time the idea is to bring the parties together with a handshake between Uganda and South Sudan and to make sure, that IGAD is respected.”

Although Mamdani recognizes the achievement of the agreement, he warns of the nature of the agreement: “What’s new about this agreement? There is nothing new. Is not an agreement between the warring parties in South Sudan. It is an agreement between Sudan/ Bashir and Uganda/Museveni. But Uganda and Sudan are not imperialist countries, so they are not trying to co-opt South Sudan. Bashir of Sudan is trying to come out of international isolation and not be the next target in the war on terrorism and Uganda tries to cut its losses.”

Mamdani said, that the biggest challenge in the ongoing negotiations about the details will be, to make it a South Sudanese agreement: ”So far there is no agreement between contending groups in South Sudan, it’s a truce. Now South Sudanese ought to make an agreement that is for them.” Therefore, it has to find a solution that acknowledges the needs of the special ethnic constellation: “This agreement is a time bomb, it will manifest in areas with clear minorities who will not be able to participate in local governments, be able to win land and the like. One critical point of view in this peace agreement is that the ministries are being tribalised because each is attached to a vice president & each Vice president is attached to a tribe.”

In an interactive Question-Answer round, participants also asked about the sustainability and the inclusiveness of the new agreement, as the agreement was signed by the same political elite that was engaged in the conflict and that terminated the CPA in 2016. Mamdani had a clear stand "This is not a conflict between ethnic tribes; it is a conflict between different political elites. The same elites who created the problem now claim to be providing the solution.”

Moreover, the audience named key challenges to the implementation of the agreement like of how to push the demilitarization, how to establish an inclusive Army and how to renew trust between the people and the government. Mamdani agreed and pointed out the challenges of creating an inclusive Army out of conflicting parties.

He additionally noted the difficulties of the Military structures of the country: “In our AU Commission inquiry in South Sudan in 2014, we asked government actors the total number of soldiers in the SPLA. No one knew. But they said they knew the number of Generals -700 of them! That’s a higher Generals per capita than any other army in the world. Don’t let the military rule. What South Sudan needs is a political process , in a political process, you need to reach out across lines. And you don’t have enemies, you have addressers.”

During the discussion, the more inclusive nature of the agreement and its implications for South Sudanese civil society, journalists and South Sudanese refugees living abroad was discussed. “Since the process started last December we have 16 stakeholders of different groups out of civil society, especially women and academics. They have been able to participate in the same way the MP could participate.”

The participation and the support of the whole South Sudanese population was identified as a precondition for the success of the agreement: “There are four million South Sudanese refugees. These people have settled in neighboring countries like Uganda. The government has to ensure that people can return to their homes. It’s the government that has to take an active role. They need to make sure that the refugees are in support of the agreement.”, said Dawa Kevin, UNHCR.

Connecting to that, the question of how to rebuild the country was asked, since the conflict led to many refugees, destroyed infrastructure and prohibited the youth from gaining good education. ”How will you build a south Sudan without young people? I hope the young people will return once peace is finally there!”, explained Prof. Melha Rout Biel.

In Addition, one audience member asked about the danger over-sensationalisation of internal South Sudanese conflicts as well as the peace agreement itself by the international media. Emmanuel Mutaizibwa, Nation Media Group Journalist, replied: “I believe that we African journalist have to tell this African stories. We know the culture, we know the context. So we have to be there to tell our stories correctly. And it is our responsibility as journalists to tell the truth without over-sensazionalizing it. We shall not give western media the chance of telling it wrong. But what makes this work so hard is the special policy towards journalists in South Sudan. Many journalists are being tortured. The government of South Sudan is hostile towards the media, I know many journalists who have been detained. But journalism is a profession and those who stayed have decided to stay to tell the truth.”

Overall, the public dialogue was well attended; the input of the guest speakers as well as the panelists was appreciated by the audience and caused a lively debate between audience and speakers. 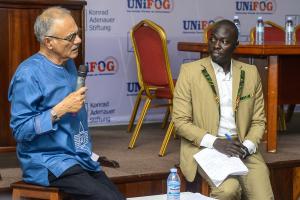 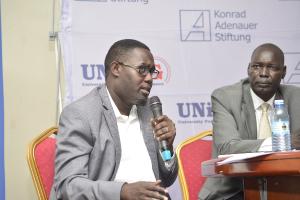 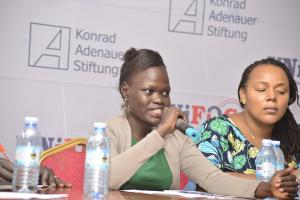 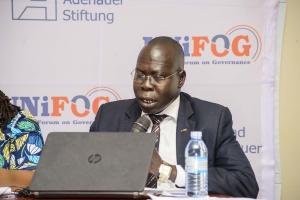 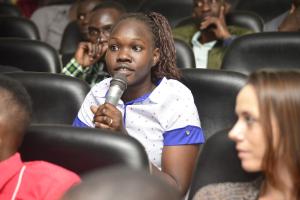