In Corporation with the Konrad-Adenauer-Stiftung, 23 elected Secretaries for Female Youth Affairs of the National Youth Council (NYC) met from 4th until 6th of October at Continental Hotel in Iganga. The meeting not only created a platform for the participants to share challenges that they face and the solutions they have come up with but also gave them the opportunity to strengthen their problem solving and leadership skills they have used in the past few months that they have been in youth leadership.
October 14, 2016 Ordering Information 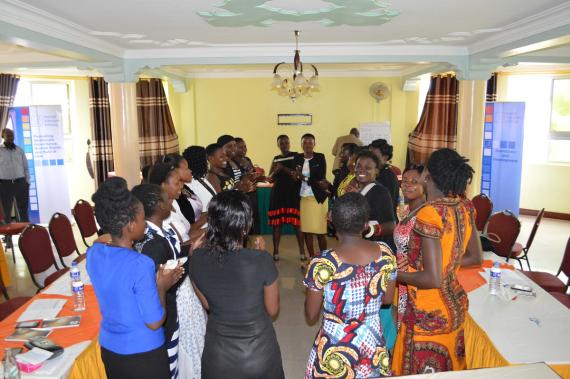 The event started with the arrival of the participants in the afternoon of the 4th of October at Continental Hotel in Iganga and a short workshop introduction by Simon Opoka, the moderator of the event.

On the following day the activities started with a workshop at 09:00am with a statistics presentation which illustrated the missing representation of women in politics in Uganda as well as a presentation by Professor Dr. Yasin Olum from Makerere University, who gave a detailed insight into the voting system of Uganda. By explaining the definition of democracy he also started a round of questions to hear about the challenges the Secretaries of Female Youth Affairs were facing during the past elections.

Dr. Olum continued with the deviances Uganda is confronted with to become a fully democratic country and asked the participants to think about what kinds of voting systems they know. Followed by a round of questions by the participants, he concluded his presentation and Simon Opoka introduced a discussion on team-building to enhance roles of female youth leaders in a council executive committee. By outlining the core elements of team-building measures, he also explained the definitions of key terms, such as capacity, team, potential and affirmative action. He concluded his presentation with brainstorming questions and the opportunity for the audience to ask about unresolved issues regarding the topic.

Subsequently, the two attending representatives from the National Youth Council, Lillian Aber, Chairperson of NYC, and Anna Adeke, the National Female Youth MP, introduced themselves and Lillian Aber began a short discussion about her career history and motivated the participants to engage in politics as she does with the words “I’m just like you! Maybe a little bit taller but we are all women!” After her presentation about the structure of the National Youth Council in Uganda, she ended with an open discussion to hear about the participants’ problems within the NYC. Followed by motivating words by Anna Adeke and her acknowledgements for the participants’ efforts in their own districts, the morning session ended.

After lunch together, Simon Opoka started his presentation about team building as well as capacity building and how these measures create more efficiency to their work as Secretaries for Female Youth Affairs. Followed by defining the meaning of domination in politics and administrative content, he explained various domination techniques and how to react to them by using counter strategies.

Subsequently, Mathias Kamp, Country Representative of KAS Uganda & South Sudan, as well as Miriam Fischer, Desk Officer of KAS Berlin, joined the workshop when Dr. Olum introduced a group game where the participants were allocated to two different groups with each having a different task. While Group 1 was supposed to list key issues that show that women are empowered in Uganda, Group 2 had to outline the challenges Ugandan Women face in politics together with suggested solutions to the challenges. The results were presented in a lively description in front of the audience which resulted in an open discussion. Professor Olum, the moderator as well as the representatives of KAS were positively surprised by the performance of the participants.

The second day ended with an exposure by Dr. Olum about various legal frameworks in Uganda which aim to reduce gender inequality and discrimination in the countries politics as well as a short presentation of statistics which showed the low percentage of women who even try to participate in the elections for various vacancies.

The third day of the training started with a revision of the past activities and a presentation by Dr. Olum about youth leadership at the district level and what it means to be accountable and ethical, he pointed out key demands of the youth population on their leaders as well as examples how to encourage the youth towards a sense of civic responsibility. Donnas Ojok, Programme Officer of KAS Uganda & South Sudan, closed the training with a short keynote to the audience.

Summed up, the event was a great success and participants as well as the organizers gave positive feedback to the activities. KAS is looking forward to see the well-trained female NYC members using their new skills in their political engagement. 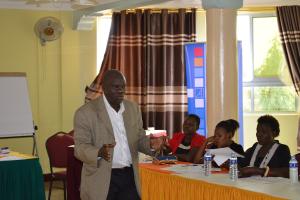 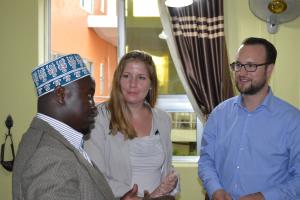 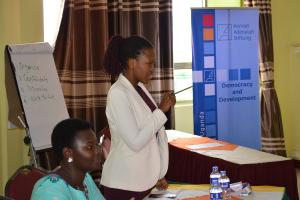 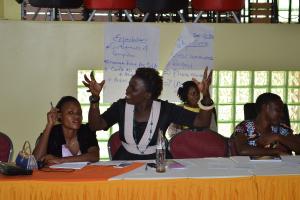